The Toshiba Thrive has the full-size ports competitors lack and a moderate price-point too — but does it stand out from the crowd?

If you've seen one Honeycomb tablet, you might well imagine you'd seen them all — most every current Android slate boasts a 10.1-inch, 1280 x 800 screen, a dual-core 1GHz Tegra 2 chip, 1GB of RAM, and a small chunk of flash storage. Toshiba's Thrive doesn't buck that trend, and in fact, it's actually the second Toshiba tablet with those specs, following the failed Folio 100 the company introduced in the UK late last year. That's not to say this slate doesn't differentiate from the competition, though. With full-size HDMI, USB and SD card slots, you can attach peripherals, transfer media and mirror the Thrive's display on your HDTV without carting exotic cables or docks around... but at .62 inches thick, the Toshiba Thrive is the chunkiest Honeycomb tablet in town. Are the ports worth the girth? Are there other worries you should know about? Read on for the full rundown.

Even at $429 for the least expensive 8GB model, the Thrive isn't the cheapest Honeycomb slate in town, but it certainly looks and feels like the cheapest when you start to tote it around. Rough plastic seams, flimsy port covers and squishy, hard-to-press buttons and switches are what you'll be dealing with when you're not touching the ultra-glossy, fingerprint magnet of a display, which also happens to have a very noticeable air gap between the capacitive digitizer and the actual screen. Meanwhile, the textured rear cover is nice and grippy, but still easily discolored by finger oils. It also doesn't fit as solidly as I'd like — when you pick the Thrive up and give it a squeeze, you can feel it give slightly.

Also, as I alluded to earlier, the Thrive's as bulky as they come. At 10.75 x 6.97 x 0.62 inches, it's as wide as an Asus Eee Pad Transformer, as tall as an Acer Iconia Tab A500 and practically as thick as the iPad 2 and Galaxy Tab 10.1 combined. It's portly enough that I had considerable trouble reaching the middle keys on the virtual keyboard with my thumbs while grasping the unit from either end, but again, you're getting a considerable array of connectivity for your troubles. In addition to power and a four-pole 3.5mm headset jack, the right side cover hides full-size USB 2.0 and HDMI ports, as well as mini-USB.

Wireless USB mice and thumbdrives were detected instantly, and I had no trouble transfering files to the device from a connected Windows PC. What's more, there's a full-size SD card slot on the top edge, a boon for photographers, as you can pop your card right out of your camera and transfer your photos for tablet viewing. (Unfortunately, external storage doesn't seem to be recognized by the Honeycomb Gallery, so you will have to copy files over before comfortably browsing images... and there's no way to compensate for overscan when using the HDMI-out, so you may lose part of your 720p image when viewing on a 1080p television.) The top edge also plays host to three status LEDs (power / sleep, battery and Wi-Fi connectivity) and the slate's only physical controls — a power toggle, volume rocker, and an orientation lock switch. There's actually a very similar-looking switch on the left side of the unit, with a lock symbol as well, but that's not the orientation lock; it's a latch for the removable back cover.

Yes, just like most Android phones you've probably seen, and totally unlike every Android tablet we've used, the Thrive has a removable panel, and a user-replaceable battery inside. Even unlatched, it's not exactly easy to take off, requiring you to pry around the seams, but there's no denying the value of being able to swap cells for some additional runtime or replace an aging battery. It's a bit of a shame, however, that Toshiba's charging $90 for additional battery packs. Speaking of factory options, there are a couple of other intriguing ones on tap — $60 buys you an HDMI / charging dock that also adds two USB ports, theoretically allowing you to attach your monitor, mouse, keyboard and external storage at the same, and $20 lets you personalize the Thrive by attaching an alternatively colored back cover. I'm rather fond of the "Lavender Bliss," myself. 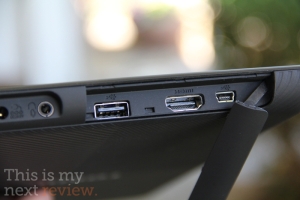 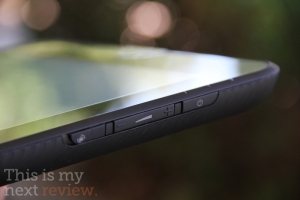 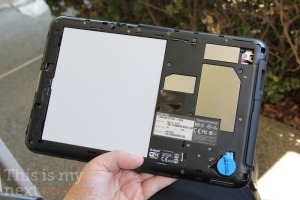 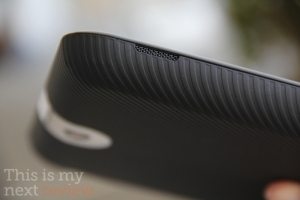 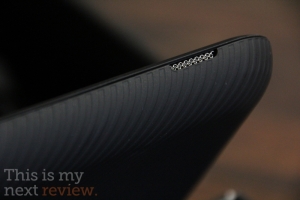 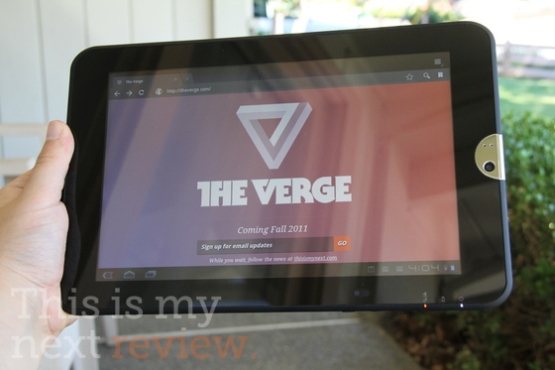 I understand that there were many reasons to dislike Toshiba's Folio 100, but the terrible screen was chief among them: low pixel density, poor viewing angles, no multitouch... you get the idea. Thankfully, the Thrive doesn't have any of these issues. The display is moderately bright and readable from any angle so long as glare doesn't get in the way, and responds to touch as quickly as any of its Honeycomb peers, though still well behind the likes of Apple's iPad 2. Unfortunately, those welcome qualities don't make up for the fact that the actual images on the screen are relatively dull — the Thrive's screen just isn't as crisp, and to the trained eye individual pixels are often noticeable. I liked it a good bit better than the screen on the Xoom, but it doesn't hold a candle to those housed in the Galaxy Tab 10.1, Eee Pad Transformer or Iconia Tab A500... and that about sums up my experience with the tablet's speakers as well. The Thrive has stereo speakers on the bottom edge of the unit, and while they're honestly not the worst we've heard — tinny, but relatively full — they're fairly quiet and all of the Thrive's immediate peers generate soundscapes that are much richer. Toshiba does let you tweak a host of audio settings in the menu, though, including bass, treble and some automatic equalizers. 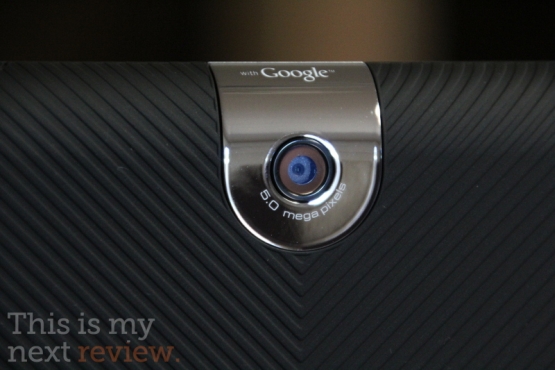 Taking pictures by holding up a giant rectangle is as silly an idea as it was the first time we reviewed a tablet with cameras, but they do come in handy for video chat and the odd snapshot, and interestingly enough the Thrive's cameras don't appear to be as hilariously bad as those on some of the slates we've reviewed before. The 2 megapixel front-facing imager is as grainy as you'd expect, but the 5 megapixel rear autofocus camera actually takes some pretty decent shots during the day, well-lit and with fairly accurate, pleasing colors.

The Thrive also shoots 720p video, and it actually wasn't terrible when I stood perfectly still. As soon as I began to walk around, however, the camera introduced vast amounts of unsightly compression artifacting. And yes, you'll be dealing with a lot of wind noise if you don't shield the microphone. 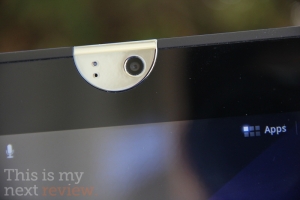 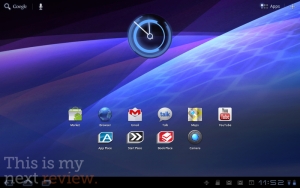 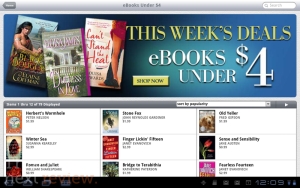 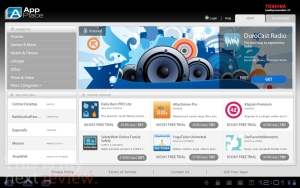 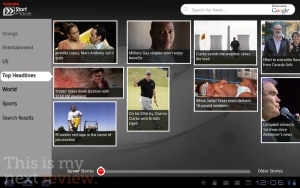 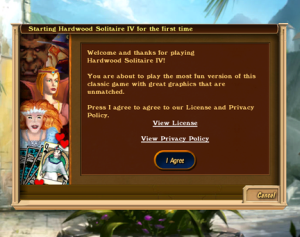 Describing what Android 3.1 brings to the table is an article unto itself, so I won't dive into it here, but suffice it to say that Honeycomb is still a lovely, functional, stylish operating system that's steadily improving and unfortunately doesn't (yet) have the app support it needs. Gmail, Google Maps, Google Books and YouTube are all fairly fantastic, as is Honeycomb's Calendar and Gallery, the revamped Google Music is pretty neat, and should you visit the Android Market you'll find a handful of cool stuff. TweetComb is a handsome tablet Twitter solution, IMDb and Movies by Flixster both get you your local showtimes, trailers and info in a very pleasing fashion, Pulse has a fantastic UI for browsing news from the comfort of your couch, and both Google Earth and Google Body are definitely worth checking out. In addition to these, Toshiba bundles a variety of software with the Thrive:

With the same basic Tegra 2 internals as all its compatriots in the Android tablet space, you'd expect the Thrive to perform similarly, and you'd mostly be right.

I found Toshiba's device just as speedy as a Galaxy Tab 10.1 when using apps, playing games and navigating the Honeycomb UI. (With Android 3.1 on board, I felt it was actually a touch more responsive and better at playing back 720p Flash video content than devices without.) That said, the Thrive lags behind the competition in three important ways. First, it doesn't seem to be quite as stable as its comrades, as I noticed a variety of annoying app and browser crashes, and notably those Force Closes occurred even with just the stock selection of apps on board. When the Thrive shipped, there was also a particularly nasty issue where the tablet would fail to resume from sleep (requiring a hard reset to fix) but Toshiba addressed it weeks later in a software update. 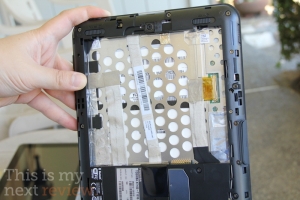 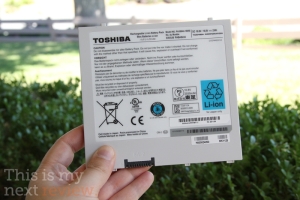 Second, despite the Thrive's considerable girth, battery life is actually somewhat worse. Toshiba promises up to 11 hours of use on the Thrive's removable 2030mAh battery, but I'm afraid I didn't get nearly that — using our brand-new battery test, which which cycles through a series of websites and high resolution images with brightness set at 65 percent, the Thrive petered out at five hours and 28 minutes. That's actually not horrible, and the Thrive lasted the entirety of a day with far more sporadic use, but the Samsung Galaxy Tab 10.1 managed over an hour of extra runtime in the very same test, despite its incredible slimness. Of course, if you've got $90 and the tenacity to use your Thrive as a battery charger, you can always purchase an additional removable battery pack, but the extra cost makes it an unlikely proposition.

Our review of Toshiba Thrive (10-inch) 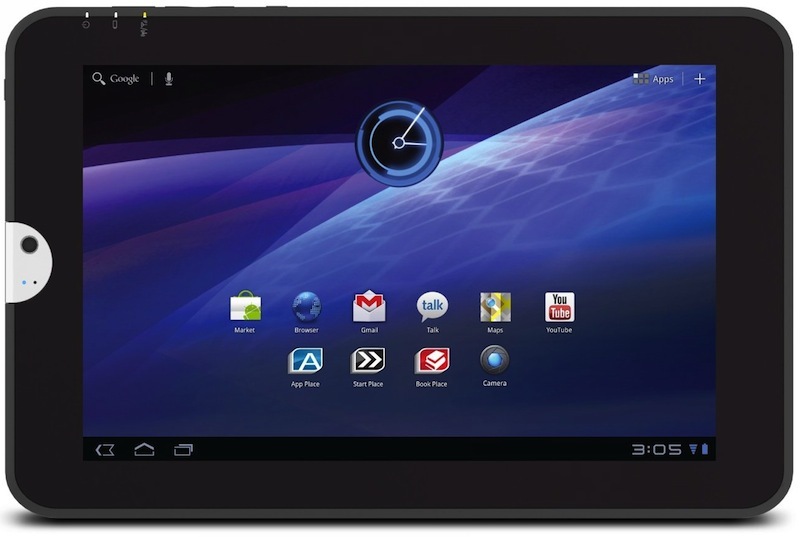 The resume-from-sleep issue was nasty, but even now that the company sorted it out, you might well be better off spending your money elsewhere. Forgetting the full-size ports and considerable girth for a moment, the main thing that distinguishes the Thrive from competitors is how thoroughly average it is — when every other major tablet manufacturer has put their best foot forward, the Thrive offers merely an average experience. That might be fine if Toshiba undercut the competition on price, but the entry-level Thrive (which comes with only 8GB of flash storage!) is still $429. Meanwhile, the ASUS Eee Pad Transformer, which is superior in almost every way, costs only $400, and you can nab the Acer Iconia Tab A500 for the same price, which comes with a USB port and a superior multimedia experience even as it suffers slightly in terms of battery life. If your desire for full-size HDMI ports and SD card slots is insatiable, we sympathize, as those are definitely features we want on our slates as well, but we'll wait for a more smartly designed tablet to integrate those ports before we lay our money on the table.