An except from an advanced copy of the Steve Jobs biography — Steve Jobs — written by Walter Isaacson reveals that the former Apple CEO was livid in January 2010 when HTC launched an Android phone with many of the same features popularized by the iPhone. Jobs called it "grand theft." According to Isaacson, Steve had these words to say in between expletives:

"I will spend my last dying breath if I need to, and I will spend every penny of Apple's $40 billion in the bank, to right this wrong. I'm going to destroy Android, because it's a stolen product. I'm willing to go thermonuclear war on this."

In a subsequent meeting at a Palo Alto cafe, Jobs told then Google CEO, Eric Schmidt, that he wasn't going to settle the case:

"I don't want your money. If you offer me $5 billion, I won't want it. I've got plenty of money. I want you to stop using our ideas in Android, that's all I want."

The meeting resolved nothing, wrote Isaacson. 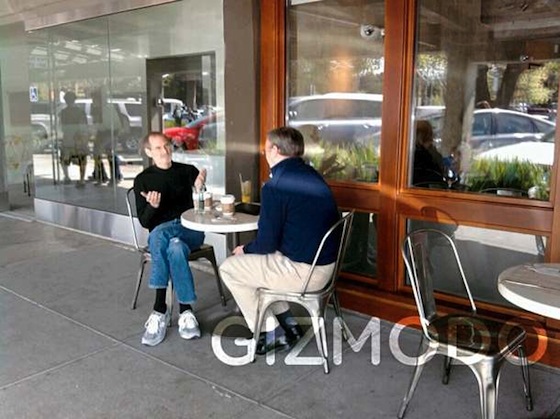 Curiously, back in March of 2010, Gizmodo posted a serendipitous fan shot of Jobs and Schmidt meeting at a cafe in Palo Alto, just days after Apple sued HTC and Schmidt resigned from Apple's board. At the time, many speculated that the meeting was a ploy by the two celebrity CEOs to demonstrate an amicable relationship given all the rumors to the contrary. In hindsight, the meeting was likely anything but friendly.