The T-Mobile MyTouch 4G Slide has a fast and powerful camera, but the software can be aggravating for power users

The MyTouch 4G Slide is the latest in T-Mobile's line of consumer-friendly Android smartphones. Its predecessors have occupied a curious place in the Android ecosystem: decidedly focused on consumers yet sporting a set of features and specs that could have a shot at drawing users away from high-end Android handsets.

The MyTouch 4G Slide fits right into that MyTouch ethos -- both by hanging on to T-Mobile's customized version of HTC Sense and by including just enough technical wizardry to make power users think twice about ignoring it. Specifically, HTC has included a great 8-megapixel camera and a well-integrated set of software and hardware to back it up. Can the MyTouch 4G Slide take the MyTouch line into the upper echelons of Android smartphones? Read on for our full review. 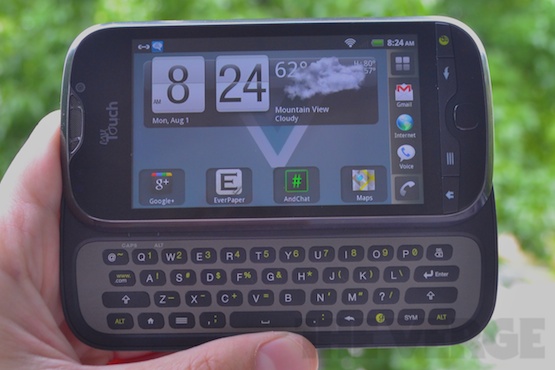 Compared to previous MyTouch smartphones, the MyTouch 4G Slide's styling feels decidedly grown-up. A straightforward mix of soft-touch plastic, a black front, and a single bezel of chrome around the screen add up to a more conservative look that manages to avoid being too boring. At 6.5 ounces, it has more heft than you might expect, however the gentle curves and soft-touch paint on the entire device make it feel fine in the hand.

There's a VGA camera up front next to the earpiece speaker grille, which is as ugly here as it was on the MyTouch 4G. Under the glass front, the 3.7-inch WVGA Super LCD screen provides passable color, but doesn't hold up well to extreme viewing angles or bright sunlight.

The sliding mechanism feels solid, but unfortunately the phone doesn't balance well when sitting on a table with the slider open -- the camera bump and weighty glass top cause it to teeter awkwardly. Around back, the 8-megapixel camera on the back juts out a bit and is ringed by a subtle yellowish-green circle, all set next to a decent pair of LED flashes. Removing the battery cover to reveal the battery is quite simple, and the microSD card (it comes with an 8GB card standard) is easy to access.

Happily, there's a lanyard anchor on the bottom of the phone -- it's a feature I don't use myself but it's such an easy thing to include it baffles me that more phones don't have one. 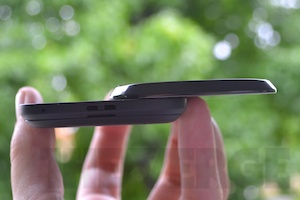 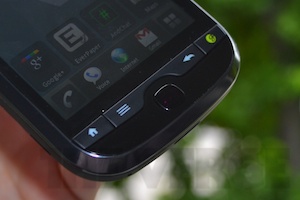 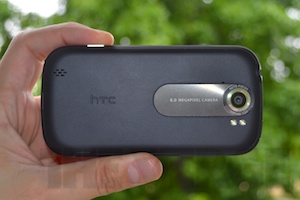 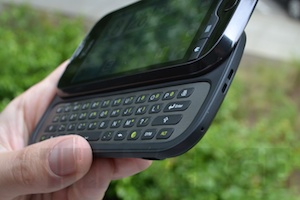 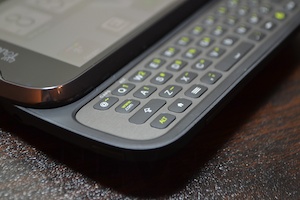 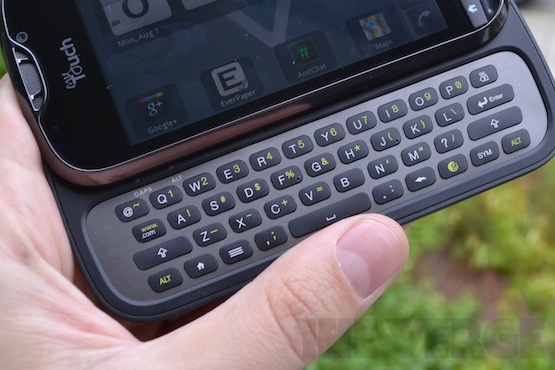 The keys on the landscape QWERTY keyboard share the soft-touch feel of the rear of the phone and have a fairly shallow travel and a somewhat muddy click (though still, of course, much better than the original Droid). With that small caveat, I'm actually pretty happy with the keyboard -- I appreciate the chiclet style, which leaves plenty of room between keys. T-Mobile and HTC added dedicated keys for Home, Menu, Back, and Genius. There are also LED indicators for caps and alt as well as a dedicated SYM key.

There are honest-to-goodness hardware buttons for Home, Menu, Back, and Genius. Beneath those is the practically vestigial 5-way optical pad. Around the edges you have the standard power button, volume rocker, 3.5mm headset jack, and microUSB port, along with a great two-stage camera button.

You may have noticed that T-Mobile is still excising the traditional Android search button from its MyTouch handsets in favor of the Genius button. It's especially egregious that they didn't find a place for it on the QWERTY keyboard, while a www/.com button, two ALT buttons and Shift keys, a SYM button, and an @/~ button all made the grade. Look, T-Mobile, I get that Genius is a core selling point for this phone but hey, so is Android, and search is important throughout the entire OS. The decision to not only remove search keys but to also disallow simple remapping is as annoying as it is paternalistic. 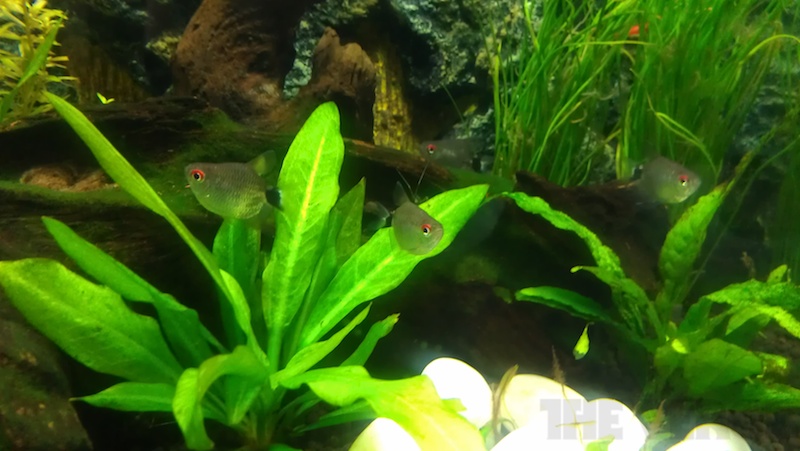 The 8-megapixel camera and HTC's integration of hardware and software are the real star of the show here. It's all set up to allow you to get your photos snapped as quickly as possible. From a powered-off state, you can hit the camera button to bypass the lock screen and jump right into the camera app, where you can use the button to focus and snap quickly. Unfortunately, unlike Windows Phone 7, this functionality gets hung up if you have a passcode set on your phone. Hopefully at some point device security on Android can mature to the point where you can snap a photo without getting access to the entire device.

HTC has also added continuous autofocus, so there's very little perceptible lag between pressing the button and getting your shot. I tested it out on a set of really fast little fish and, indeed, they weren't able to dash away from my shots. There is also a full array of camera presets:

The settings are well-laid out and easy to understand for novice photographers while still offering serious shooters the ability to dig in and tweak. The camera performed exceptionally well in low-light situations, though the basic Automatic setting occasionally produced shots that felt a little overexposed. Poor photos were the exception rather than the rule, however, and knowing that you're much less likely to miss shots really does make you reach for your camera more often.

It all adds up to a camera experience that's amongst the best on any smartphone. Sure, it can't compete with high-end Nokia phones on pure image quality, but that's a pretty high bar to set for something marketed as a mid-range Android phone. 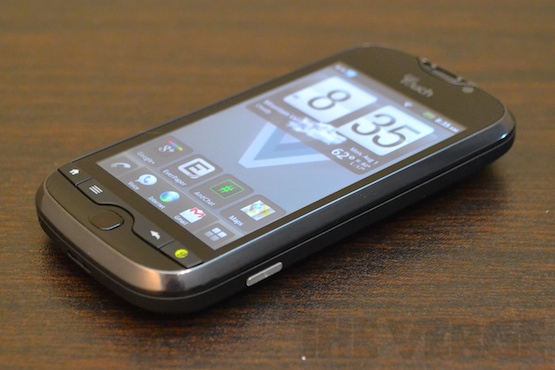 For the MyTouch 4G Slide, T-Mobile has scaled-down HTC's Sense 3.0 skin sitting atop Android 2.3.4. Most of the changes involve different UI graphical elements, customizable via themes. They did remove the ability to drag the unlock "loop" directly onto a shortcut to jump directly into that app. I do find many of the added features in this skin to be quite nice. I'm particularly fond of the enhanced notification area with a most-recently-used apps section and a tab to quickly toggle settings. However, tied with overabundant animations and the cognitive dissonance between the standard Android feel and T-Mobile's version of Sense skin, it just feels off-kilter. It's as though T-Mobile over-designed the skin here in an attempt to be consumer friendly and the result is that you get a less-powerful skin that doesn't add enough usability to be worth the effort.

The phone is powered by a 1.2GHz dual-core Snapdragon processor paired with 768MB of RAM. The phone definitely makes use of those relatively powerful specs to power through Sense's animations and added features. Most of the time, the core UI responds with some snap and verve, though I definitely experienced lag in places. In particular the contacts app struggled mightily when synced to a Google account I hadn't pared down from the 1500+ contacts. It seems as though HTC has solved Sense's occasional lag and bloat by throwing a powerful processor at it. While it's a solution that works, it would be nice to have that extra power applied to apps and games instead of Sense's overhead.

As long as I'm talking about things that work better but are still aggravating, I'll point out that this is the first Genius-enabled device where I've actually used the feature with anything resembling success. "Genius," if you're not familiar, is a voice-recognition app that lets you dial, send text messages, search, and more. Nuance's voice recognition is as solid as ever and the processor and RAM finally seem to have the oomph to power the feature on the MyTouch 4G Slide. It's not enough to make me forget that I don't have a Search button, but at least it's usable here.

You can find a full gallery of the software on the T-Mobile MyTouch 4G Slide here. 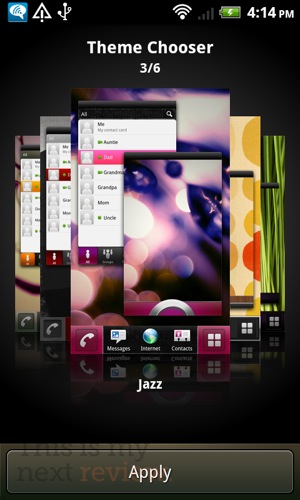 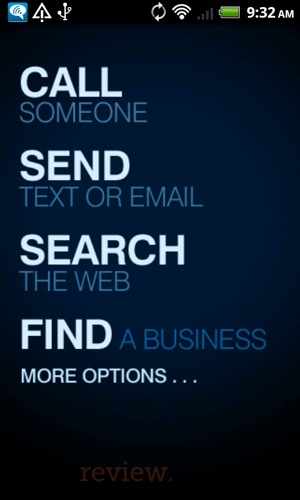 Battery life on the MyTouch 4G Slide is not a major cause for concern. I haven't had a problem getting a full day of moderate usage out of the 1520mAh battery. I actually was able to push it to a day-and-a-half a few times. Unfortunately, getting much more than that is going to be difficult, especially if you go all-out and enable all of the social networking sync functions offered in Sense.

If you are in a place that can get T-Mobile's "4G" service, data speeds are remarkably good, but I generally find that to be the case with T-Mobile. If you can get the "bars," you can get solid download and upload speeds (if you haven't guessed, I don't live in a good T-Mobile area). Voice quality is fine here but not particularly notable. You can also enable Wi-Fi Calling on the device. 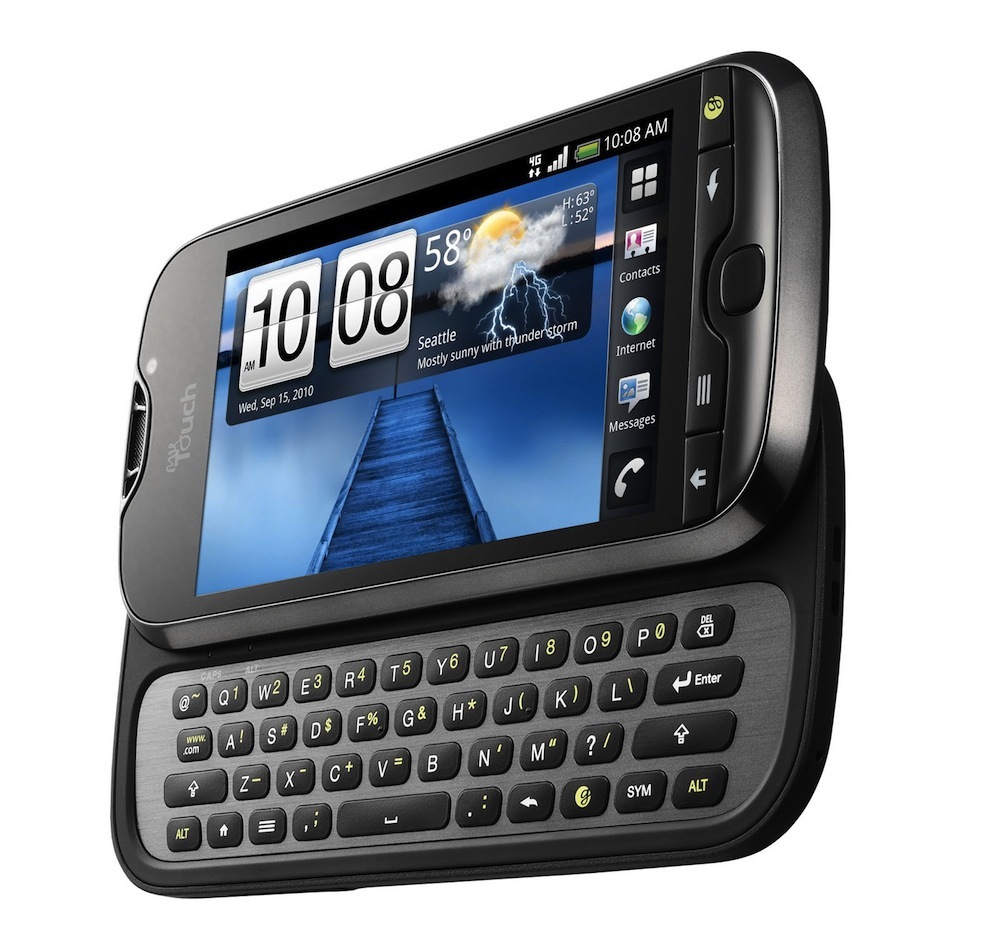 If you're a shutterbug or are not dogmatic about a pure Android experience, it might still be worth a look

The MyTouch 4G Slide has elegant and solid hardware, decent speeds, and the best overall camera experience I've had on a smartphone in a long time. For most people T-Mobile and HTC are targeting with this device, that's enough to make the sale. Make no mistake, though, this is more MyTouch than Android -- with all of the caveats that distinction brings. I think that experienced Android users will find T-Mobile's Sense skin overwrought and the insistence on replacing Android search with the Genius feature aggravating. I certainly do and I'm not alone in wishing T-Mobile would just cut it out. If these features actually do appeal to you, they run better on the MyTouch 4G Slide than I've seen run before. If you're a shutterbug or are not dogmatic about a pure Android experience, it might still be worth a look.