RIM takes another shot at an all touchscreen BlackBerry — is the third time the charm?

The BlackBerry Torch 9850 marks RIM’s third attempt at a touchscreen-only phone with no keyboard. Though you might think of it as a Storm 3, RIM’s gone with the newer (and arguably less infamous) Torch brand for this one. The 9850 isn’t anything like the first Torch 9800, and aside from nearly identical guts on the inside it’s far different from that device’s followup, the 9810. So, just what is this new mysterious BlackBerry about, and where does it fit in the lineup? Read along after the break as we shed some light on those questions and more. 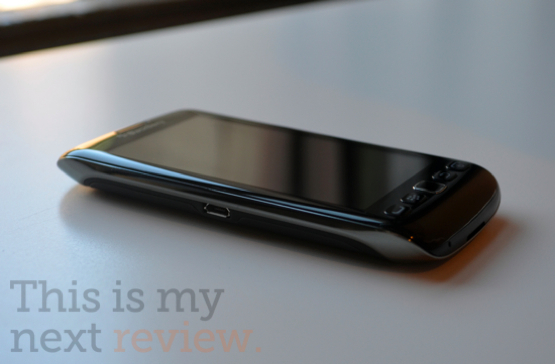 Design-wise, RIM’s third iteration of a touchscreen-only device generally looks to be from the same bloodline as the Storm and Storm 2. Of course, it has redesigned buttons and a trackpad up front, but overall there hasn’t been much significant change in the device’s footprint. The entire front facade is wrapped in shiny black plastic, with tapered edges along the top and bottom. A shiny metal band wraps around the back and sides of much in the same way as the Bold 9700, but in my opinion it’s just a tad overdone and makes the device look cheap rather than classy. Still, its thinness (0.45 inches) and ample weight give it a sturdy feel, and it rests nicely in the hand.

The earpiece and LED status light sit above a silver BlackBerry logo, while the standard set of BlackBerry navigation keys occupy the lower edge below the screen. Those keys do represent a marked change from the past Storms; the original Storm had physical keys aligned right next to each other, and the Storm 2 had fully capacitive ones. The 9850′s navigation controls, meanwhile, are four separate buttons and function as real hardware keys that remind us of the more rigid Curve keyboard. They do seem to be slightly on the smaller side, especially given the device’s 2.44-inch width.

Located in the middle of those four buttons is an illuminated optical trackpad that’s now become a trademark on all recent devices out of Waterloo. I still don’t quite see its utility with all the touchscreen real estate available, and its positioning at the extreme bottom means that you can’t really use the trackpad comfortably while the device sits in your hand. Another side effect of its positioning is that when you scroll up, you can inadvertently touch the screen causing unwanted input. I found this to be particularly frustrating when swiping downwards. There are cases in which the trackpad’s accuracy is needed over touch input (selecting text is far easier using it), but RIM almost seems afraid to axe the mouse-like navigation method in fears of scaring off customers — much like the backlash that occurred when the company first axed the thumbwheel that preceded it. At least on the other Torches that marry a touchscreen with a trackpad, the trackpad slides up to a more appropriate central location for use.

There are more buttons and ports along the outer rim of the device, including a micro USB port on the left side and 3.5mm headphone jack on the opposite one. That right rail also has a volume rocker that seems oddly thin, and a separate convenience key at the bottom whose positioning doesn’t make much sense until you flip the device into landscape to take a photo (its default setting). The entire upper edge of the device serves as a lock key, replacing the separate mute / lock layout from Blackberry devices of yesteryear.

On the back, the 9850’s gray rubberized battery door doesn’t match the other dark gray and chrome trim surrounding the 5-megapixel camera and LED flash. The two-toned design highlights the device’s less flattering curves; it would definitely be sleeker if it was all uniform. I wouldn’t go so far as to say that the 9850 is an "ugly" phone, but it definitely boggles my mind that RIM would out a device like this when it clearly still has the chops to develop classy, handsome devices like the Bold 9930 and Torch 9810. 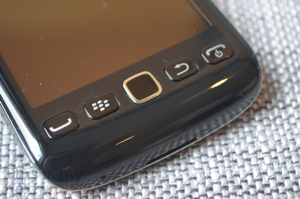 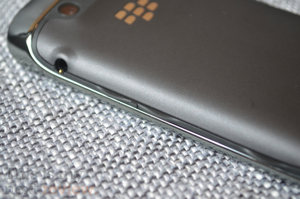 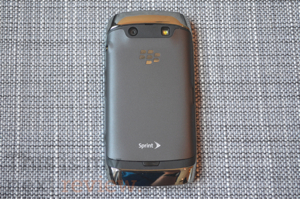 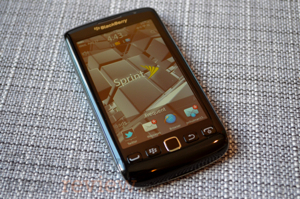 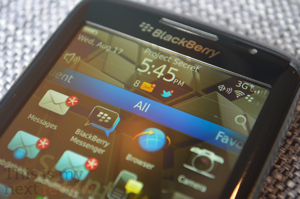 As Josh mentioned in his review of the 9900, this latest trio of BlackBerry devices all pack essentially the same circuitry under the hood. A 1.2GHz, single-core Snapdragon CPU serves as the brains of the operation, with 768MB of RAM and a paltry 4GB of internal storage. Our review unit did come pre-loaded with an 8GB microSD card, but the 9930 has double the internal storage right off the bat. There’s also Wi-Fi 802.11b/g/n, Bluetooth 2.1, and an AGPS chip just like the 9930.

The 9850’s 3.7-inch WVGA display up front is a worthy focal point of the device, and I’m really impressed with its clarity, brightness, and sensitivity. Colors are vibrant and pop, blacks are dark and sharp. It’s a really nice screen on a particularly unattractive phone.

The Torch 9850 for Sprint is a global device, supporting dual-band CDMA with EVDO Rev. A (there’s no 4G) and quad-band GSM that’ll give you 3G abroad. The Torch 9860 for AT&T is the same phone with a tri-band HSDPA / UMTS radio. 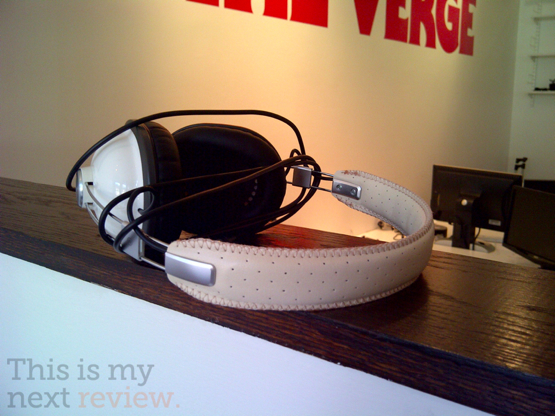 This Torch — like the other new devices — has a 5 megapixel camera on its backside along with an LED flash for nighttime paparazzi adventures. It’s capable of 720p HD video and has continuous autofocus unlike the unfortunate fixed focus camera on the new Bold. Photos taken on the device were clear, and focusing was quick and worked well. Indoor shots that lack natural light didn’t fare as well, but in general they are certainly passable.

HD video captured is also good. The camera app supports image stabilization, but I still found videos to be slightly shaky even with the setting enabled. As with photos, the camera RIM’s chosen will definitely get the job done for those casual Kodak moments when you don’t have your SLR. 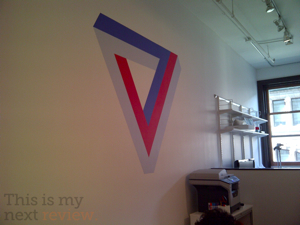 As I hinted at earlier, the combination of a high quality touchscreen and that 1.2GHz Snapdragon does wonders in terms of performance. Interacting with menus, launching apps, and transition animations all seem to be very smooth. Actions that used to be sluggish or delayed — things like navigating through web pages and scrolling long lists — are far improved.

Battery life is a usual strong suit for BlackBerry devices, and the Torch 9850 seems to make it through the day. I’ll admit that I didn’t spend the entire day BBMing and emailing using the device exclusively, but for periodic Twitter checks and e-mail correspondence on the go, it still had quite a bit of juice left in it by the end of the day. Of course, users who won’t put the device down all day long will probably experience different results, but it seemed to be fine for me. 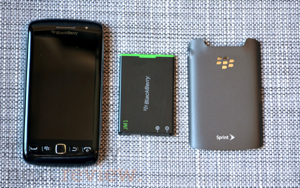 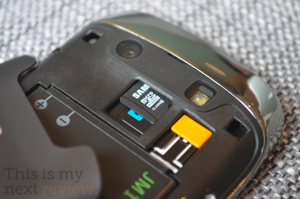 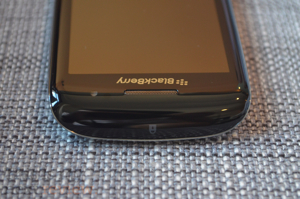 Though the speaker on this Torch is on the louder side, sound quality is fairly average as far as phone audio goes. Even at maximum volume, I didn’t notice any blown out sounds or particularly jarring noises.

Call quality is loud through the earpiece, but seems quite muffled in testing. Josh remarked that the Bold’s sound quality was markedly better, and I too was unimpressed by the sound coming through. Reception did not seem to be an issue, however, and I didn’t ever lose service completely in testing — even in an elevator. 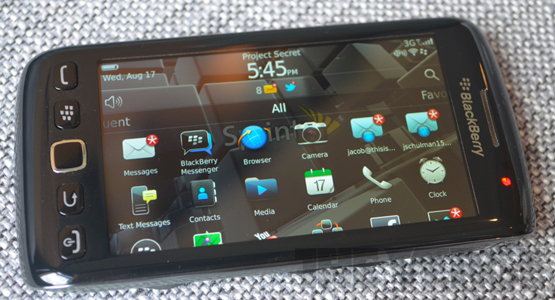 BlackBerry 7 is the operating system powering RIM’s latest smartphones, and I won’t waste time rehashing details of this incremental upgrade to the BB OS since Josh already did those duties in his Bold review. The additional horsepower makes the OS run much faster, something longtime BlackBerry users will notice immediately.

Unfortunately for an all-touchscreen device, the software keyboard on the 9850 is one of the worst I’ve ever used. In portrait mode, individual keys are far too small and tightly packed together. To make matters worse, the predictive capabilities and autocorrect are not powerful enough to offset the additional errors caused by its poor layout. Typing is more acceptable in landscape mode, but prolonged use with the phone sideways isn’t really practical for most users. It’s also not possible to download an alternative third-party keyboard — which leads us to the next problem with the device’s software: its app selection.

If you’ve read my past BlackBerry reviews, you’ll know that I was the last BlackBerry holdout on the Verge staff. (Say what you will about BBM, but there was a time when it was essential.) I’ve never been particularly blown away by the selection of BlackBerry apps, but at this point the platform is clearly stagnating. OS 7 also breaks compatibility with some older apps, like SocialScope — my favorite BlackBerry app. In general, however, the world of BlackBerry apps is increasingly overshadowed by other more developer friendly platforms like Android and iOS. And no, adding an NFC API to the OS 7 SDK doesn’t count as "catering to developers." 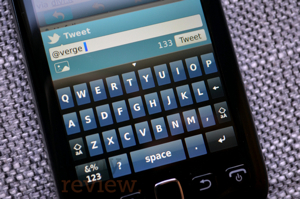 This latest Torch is certainly an interesting device, but I honestly can’t recommend it over any of the other BlackBerrys on the market. The virtual keyboard alone is one of the most frustrating I’ve ever used, and with alternatives like the Bold 9900 and Torch 9810 available, I can’t imagine why anyone would want this device instead. On one hand, it won’t attract those users who demand a physical keyboard, and on the other it fails to be a more attractive offering than most Android devices or the iPhone. I’m not quite sure who RIM had in mind when it designed this device, but the company should seriously consider playing to its strengths and making phones for the people who already swear by their BlackBerrys.