Numark's first turntable setup for the iPad is portable and fun, but is it enough to get the party started?

Numark’s iDJ Live is the type of device that excites my dual passions: gadgets and electronic music. You see, my affinity for the world of DJing has developed over the past year, and I knew I had to check out this turntable / MIDI controller that aims to turn your iPad or iPhone into a new age DJ setup. The $100 accessory also just happens to be made especially for Djay, an app I reviewed on Engadget that I consider to be one of my favorites to this day. If you want to hear more, head past the break. 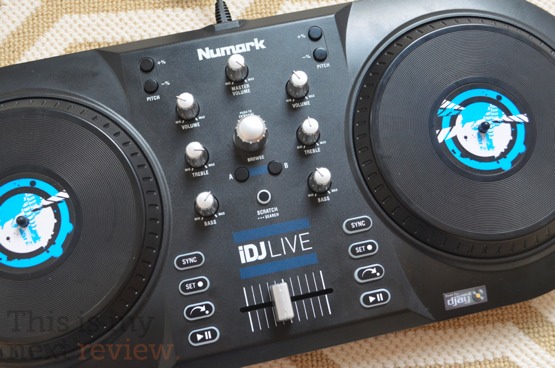 Though the music production world is warming up to technology, the idea of ditching physical buttons has become a point of contention among DJs. I’m the kind of person who likes to be on the cutting edge of technology — no matter what type. And on top of being lighter than any Numark or Pioneer kit I’ve worked with, the iDJ Live is also compact enough to carry comfortably under your arm, as I’ve learned while toting it back and forth to our New York office during testing.

Hardware wise, the unit resembles a familiar set of turntables, with circular decks on either side and a central mixing console. Though it’s made of plastic, it doesn’t feel cheap. A large crossfader sits in between the two unmotorized decks, with two sets of buttons for play / pause, setting cuepoint, returning to cuepoint, and BPM sync flanking either side. Separate sets of knobs for adjusting bass and treble are located above (though there isn’t one for adjusting mids), along with dual volume adjustments and pitch controls in addition to the master volume knob.

Much like some of Numark’s other offerings (namely the NS7), the iDJ Live unit has a browse nob right at the center which lets you select and load tracks — no touching required. Last but not least is a special button (seen above) that switches between two modes: "scratch" is useful for quick transitions or setting specific cuepoints, while "search" lets you jump through large chunks of a song quickly.

The unit also comes with a folding piece of plastic that serves as an iPad stand. Though we like that it folds flat for easy storage, its angle is a bit too sharp for realistic use, especially if you’re standing over the unit at a table. We pretty much gave up after a few minutes, opting for the slight incline of Apple’s Smart Cover instead. 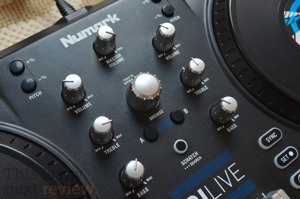 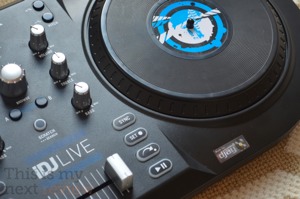 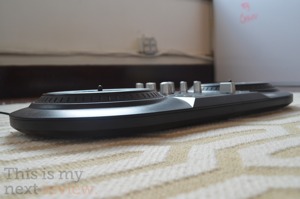 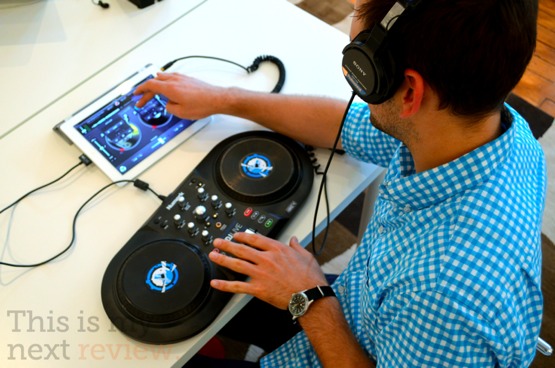 I’ve already expressed my feelings on the Djay software, and it’s interesting what happens when you add a physical controller into the mix. The iDJ unit is powered by whatever device you connect it to, and is recognized by the app almost instantly. We didn’t notice any major drain in power from our use, so unless you’re DJing multiple Armin Van Buuren-type marathon sets back to back, you should be fine. The unit also comes with a special split output cable that lets you pre-cue tracks in a headphone channel while pumping tunes out through the other.

Sensitivity on the individual tables is appropriate — even the gentlest taps on its vinyl-like surface will stop a track from playing, though you can’t use friction along the outer edge to slow one down. Using the hardware knobs instead of tightly spaced on-screen controls for equalizer adjustments and track selection is an absolute pleasure. The app’s multitouch implementation makes it feel more lifelike, but physical buttons are unmatched (for now) in an art that requires so much dexterity and human interaction.

The focal points of Djay’s interface are the lifelike spinning tables that eat up much of the screen, along with accompanying crossfaders, BPM controls, and cue setting points below. Yet, most of these on-screen controls are made redundant by the iDJ unit which has physical controls for those features. Extra features — namely looping controls and additional cuepoints — are still buried in the Djay dropdown menu. Even wavelengths along the top stay too small to accurately judge without stopping a track, and the iPhone version of the software is even more cramped.

We spoke with Algoriddim, the makers of Djay, about of these concerns, and they assure us that there’s more on the way. I suggested some sort of ‘control mode,’ which would make the iPad / iDJ relationship much more like that of a professional hardware setup with accompanying desktop software along the lines of Serato or Traktor. I’m envisioning things like large parallel wavelengths and larger looping buttons for the iPad, while there’s even more room for improvement on the iPhone.

One problem I noticed was that there’s no way to wake your i-device using the controller, so you’ll have to use the home or sleep / wake button to bring it back to life. It’s a minor annoyance, but perhaps an option to disable screen sleep in the app when the controller’s connected would be a nice touch. We’re also unsure why there’s no mid control knob on the unit, but that’s not the biggest deal in the grand scheme of things.

If you want to up the ante from your standard party playlist, you may want to give the iDJ Live a look

Despite some of the software’s inefficiencies, the iDJ Live controller is a fun toy to have lying around no matter your experience level. The product’s low price point combined with the portability factor makes it all the more attractive to pick up just for fun. Of course, this all depends on the fact that you’ve already invested in an iPad or own an iPhone. At this stage of the game, the combination is probably too dumbed down for folks who feel at home behind high end DJ systems, but that’s not who this product is really designed for. However, if you’ve already got an iPad and want to up the ante from your standard party playlist, you might want to give the iDJ Live some serious consideration.