The j5 Create Wormhole KM Switch promises to bridge two computers with no muss and no fuss — but does it do the job?

Never heard of j5 Create? You can't really be blamed; the first time we saw the peripheral company's terrible website and fantastical product claims, we were half-convinced the whole company was fake. As it turns out, however, the firm's quite real and has a desirable product, too — a USB cable that lets you connect two Windows computers together to share their keyboards, mice and even transfer files nearly seamlessly. It's called the Wormhole KM Switch, and I'm using it to write these very words you see, typing on my comfortable desktop keyboard connected to my laptop screen, and vice versa whenever I feel like it. But how does the Wormhole work, and is it worth your $29.99 and change? Read on for the answers to your queries.

Update: There's an even better $40 cross-platform version that can connect Windows and OS X computers, too.

I won’t pretend that you need a USB cable to connect a pair of computers, as savvy individuals have managed without them for years — you can certainly hook up an ethernet switch or a wireless router to transfer files between machines, and programs like Synergy will let you share your mouse and keyboard over a network much like what j5 Create’s device promises here. If you’ve ever actually fired up Synergy, though, you’ll know it’s not an easy program to set up — whereas the j5 Create Wormhole KM Switch literally took under a minute to install and become fully functional.

You simply plug one end of the USB cable to each computer, and it prompts you to install WKMLoader.exe, a desktop client that resides in your Windows system tray. It allows you to change how you switch between screens (there are several methods) and whether the app audibly warns you when that’s happening. Impressively, the client also automatically reconnects the machines if you remove the cable and plug it back in, or if either goes to sleep. There’s no need to re-pair anything. 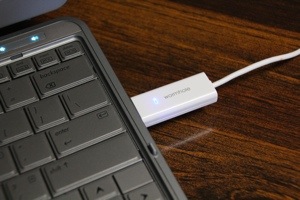 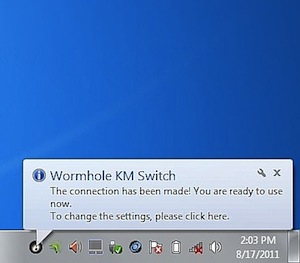 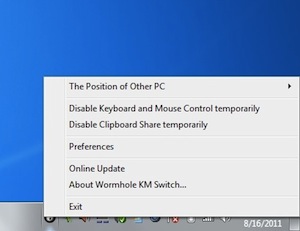 Once you've got both ends of that cable securely affixed to your computers, it doesn't feel too different from having an additional external monitor attached to your PC — except, of course, that the second monitor has its own CPU, graphics and storage to deal with. By default, you can move your mouse cursor right off the edge of one computer and on to the next, and take things with it, too. You can drag and drop files right from one computer onto the other at USB 2.0 speeds, and we measured average transfer rates of 30MB/s read and 20MB/s write when moving large video files. The program's not quite sophisticated enough to drag web browser tabs across the USB connection, but it does copy your Windows clipboard — we were able to copy and paste files, snippets of text and even full desktop screenshots taken with the Print Screen button with no perceptible down time.

What's more, the whole keyboard / mouse sharing is bidirectional, so you can use one computer to control the other and vice versa without having to reverse the cable or designate a host machine. There is one minor nitpick here though: each keyboard and mouse set is treated as a pair, so you can only use a particular keyboard on the screen where its corresponding mouse cursor is active. While we're on the subject of keyboards, I also noticed that not all of mine worked equally well with the Wormhole — my $60 Logitech G110 had trouble getting simultaneous keypresses through, even as my $10 no-name keyboard (and the laptop's built-in keys) worked fine no matter my typing speed. Meanwhile, on the mouse front, even my wireless rodents, connected via USB hub, had no additional lag to speak of. 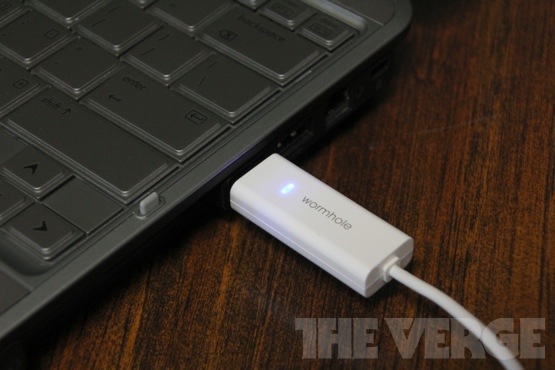 Though the Wormhole KM Switch certainly does its job well, there's definitely room for improvement. It can be a little jarring switching between screens — sometimes it feels like you have to give the mouse cursor a strong push to gain control of the other computer. Multi-monitor setups are supported, but you have to use the mouse and keyboard of the system that the extra monitors are attached to if you want to access all the screens — if, say, you've got a three-monitor desktop and a laptop, the laptop will only be able to transfer control between itself and the desktop's primary display. It's also slightly annoying that the dongles will always prompt you to install WMKLoader even when it's already installed. For some, though, the most annoying omission will be Mac support.

Yes, even though j5 Create's glossy white plastic and shiny silver aluminum products look just like they're designed to connect to Apple products (and some are even photographed together) the Wormhole software doesn't work at all on Mac. The company says it's got a Mac-specific version in development, but won't say when it's due... and honestly, even the full bandwidth of USB 2.0 isn't quite speedy enough to transfer large amounts of data between computers. What we really want is a USB 3.0 Wormhole that works with any operating system. That'd be a truly useful tool. 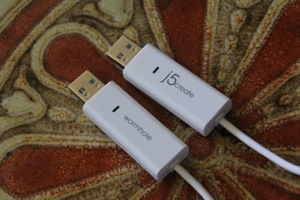 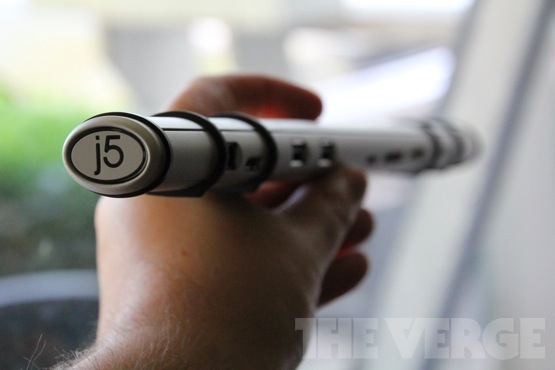 Speaking of alternate versions, j5 Create does sell another variant of the Wormhole: it’s a shiny silver cylinder called the Wormhole Station, which marries the same functionality to a three-in-one card reader and a USB 3.0 hub. It works just as well, but it’s incredibly pricy at $130 and probably more trouble than it’s worth. While the KM switch only requires you to plug a self-contained USB 2.0 cable into two computers, the Wormhole Station includes a fairly-rare USB 3.0 to USB 3.0 mini cable to connect to the host machine, another USB 2.0 to Mini USB 2.0 cable for the client, and an AC adapter to power the additional ports and a glowing blue LED.

Theoretically, you’d use it as a base station for your laptop, as it has a series of rubber feet for your notebook to rest on, but you’re not getting a lot of ports for your dollar — once you’ve connected both computers, you’re just adding one SD slot, one Micro SD slot, one Memory Stick slot, and two USB 3.0 sockets. And again, you also can’t use those USB 3.0 speeds to transfer between two Wormhole computers, as the client can only be connected via the inferior USB 2.0 cable. At least you don’t lose any throughput here: I measured transfer speeds of 100MB/s read and 80MB/s write between my desktop and an external solid state drive, exactly the same as I got with my desktop’s own built-in connection. 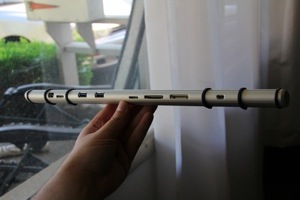 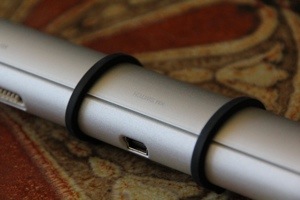 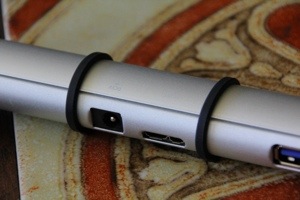 If you want to turn your existing Windows computers into a single combined work surface, the Wormhole KM Switch's price is right. Don't bother with the Wormhole Station unless you like shiny, glowing toys. If you're a Mac adherent, you've got some waiting to do. If what you really want is to quickly sync text and small files between computers, you probably don't need a peripheral at all — get Dropbox or one of its competitors set up to automatically and wirelessly do the job. If you're like me, though, and want a simple, direct connection that can transfer large files and work across Mac and Windows PC, get j5 Create on the horn and tell the engineers to work their magic on a cross-platform, backwards-compatible USB 3.0 version of the Wormhole, if such a thing is possible. They've come this far, after all.Update: Half my wish has been fulfilled, with this $40 cross-platform version of the KM Switch.