Sprint takes HTC's new 7-inch tablet with a stylus and adds WiMax (and a two-year contract), but does that make the tablet better or worse?

Wait, didn’t we just review that tablet up there? Indeed, it was just a two weeks ago that HTC launched its 7-inch, WiFi Flyer at Best Buy, but next week the Android 2.3 tablet arrives on Sprint shelves with a new name and notable addition — 3G / 4G radios. The Evo View 4G, as Sprint has taken to calling it, is the carrier’s first 4G tablet and will be available for $399.99 with a two-year contract. So are there any major differences between the Evo View and the Flyer? And is the tablet worth the cash and what feels like a life-binding contract? Hit the break for our quick review. 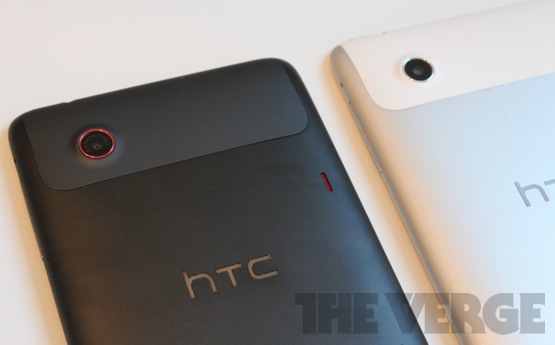 As far as the Evo View’s design goes, the only thing that has changed from the Flyer is the color of its skin. The silver and white hues have been replaced with a primarily black aesthetic and some small dashes of red — there’s a small scarlet ring surrounding the camera and a sprinkle of the same color in the small, rear speaker grills. But while black is supposed to make things look slimmer, it doesn’t have the same effect here. Just as I stated in the Flyer review, the .52-inch / .9-pound tablet is thicker than most. And in comparison to the Galaxy Tab 10.1 or iPad 2, it just looks chunky.

Other than those small tweaks, the View has the exact same hardware as the Flyer. The rear 5 megapixel camera takes pretty crappy shots and video, and the front-facing one isn’t all that much better. Although the Snapbooth software makes the latter lens a lot of fun to play around with. There’s a power button, 3.5mm headphone jack, charging port, volume rocker, and a microSD card slot under the plastic piece on the back of the tablet. There’s still no stylus holder, and considering Sprint is going to include the pen with the tablet (none of the Flyer’s $80-a-stylus crap here!), it seems like an even bigger design blunder. And unfortunately, this time around I can confirm that the pen can be lost — yes, I misplaced it last week and still haven’t found it. Luckily for me, I had the Flyer’s pen around to test out the inking capabilities.

As you’d expect, that pen interacts with the 1024 x 600-resolution 7-inch display in exactly the same way as the Flyer. The N-Trig active digitizer, which overlays the panel, works as a regular touchscreen until you put the pen to the glass — then you get a very precise inking experience that no capacitive stylus can provide. Writing was quite smooth on the tablet, although it seems quite a bit laggier than the Flyer — regardless, the lack of apps still doesn’t allow the feature to reach its full potential. You’re still limited here to HTC’s Notes app (or Evernote), Scribble, and Reader. That means the pen doesn’t work in any other applications, and it’s still highly annoying that HTC isn’t supporting any apps that will convert handwriting to editable text. 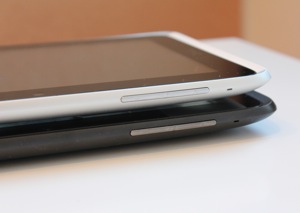 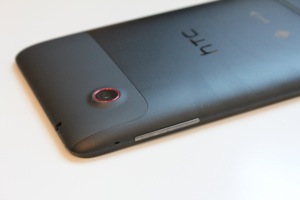 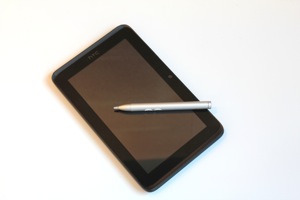 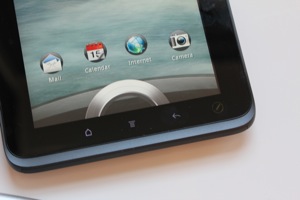 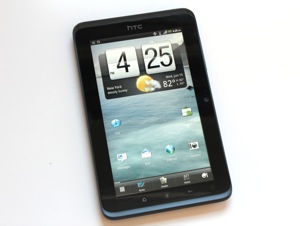 Sprint hasn’t changed much of the software experience, either. HTC’s Sense for tablets (or Sense 2.1 as it states in the Settings menu), which I described in detail in the Flyer review, certainly makes Android 2.3 more tablet-friendly. Still, the experience is a personal preference. I don’t mind the additions and app tweaks, but I know others find it to be distracting and laggy. The latter part of that equation is something I noted in the Flyer review. The 1.5GHz Snapdragon processor provides enough power to push around the animation-heavy interface, but it can get sluggish at times, especially when you have a few apps open. HTC’s Task Manager is easy to use, but basically you’ll have to carefully manage apps to get consistently adequate performance. After seeing how much snappier the Evo 3D is, I’m of the mind that HTC should have packed this tablet with more powerful silicon. And while I’ve digressed to talking about innards, the battery life is quite good. I haven’t re-run our battery test on the View, but I also haven’t had to charge the tablet once in the last two days of sporadic heavy use.

Of course, Sprint couldn’t help itself and preloaded the tablet with a few of its own apps, including a shortcut to Sprint NASCAR, Mobile Wallet, Sprint Radio, and Sprint Zone. Also, I should note, that Sprint specifically says that the View 4G will get Honeycomb at some point, but couldn’t provide a solid time frame. 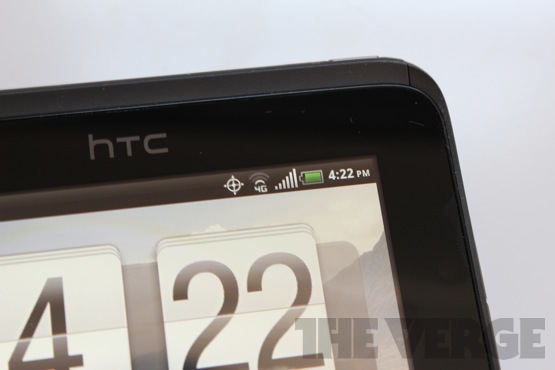 I’ve had a hard time getting a strong WiMAX signal in NYC over the past few days, but even when I did, the speeds were quite inconsistent and uploads were particularly bad. (Or I just consider any 4G connection that’s not LTE to be slow now.) The only time I was able to get full service was in Union Square, and even then I only got a range of 6.72 to 10.50Mbps on the downlink and 0.93Mbps on the uplink. 3G speeds were also somewhat slow — I notched an average of 1.50MBps on downloads and 0.16MBps on uploads on SpeedTest.net. The hotspot functionality, which costs an extra $29.99 a month, was a cinch to configure and I had no problems setting a new password and connecting my laptop to the network. That said, I’d chose to use an LTE mobile hotspot any day. 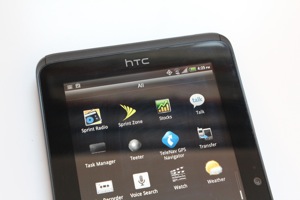 Considering the Evo View 4G is already running outdated software and packing a single-core CPU, I’m not sure it’s an investment with much longevity

By and large, the Evo View 4G is the same product as the Flyer. It’s a 7-inch tablet that doesn’t yet run Honeycomb, but has a very unique integrated stylus experience and some interesting optimized software. Like the Flyer, it also has some large flaws, including a sometimes-sluggish software experience, lack of a stylus holder, and no support for other third party pen-based apps. The addition of mobile broadband surely makes this tablet more mobile, but ultimately, I feel the same way as I did the first time around. The Evo View is a solid device with some interesting features, but at $399 plus a minimum $45 monthly plan (which is at least $1,080 for data over two years), it’s an expensive investment. And considering it’s already running outdated software and packing a single-core CPU, I’m not sure it’s one that has much longevity.