The Samsung Galaxy Tab 10.1 is the thinnest tablet yet and doesn't sacrifice battery life for the trim dimensions. Should the iPad be scared?

You don't have to sift through the legal filings to get a feel for Samsung and Apple's mobile war — all you have to do is take a look at Samsung's latest entry in the tablet market. The Galaxy Tab 10.1 is the company's first Android Honeycomb tablet, and well, it was born in direct response to Apple's iPad 2. No, it actually was. Samsung tossed out the original Galaxy Tab 10.1, which was unveiled in February at Mobile World Congress, after Apple released its thinner iPad 2 a month later. Samsung VP Lee Don-Joo even publicly stated that the iPad was "very thin" and that the company had to improve its "inadequate" wares. By the time CTIA rolled around in late March, Samsung had an entirely new 0.33-inch thick Tab 10.1 that could compete with Apple's slab on both price and size.

Yes, the new Galaxy Tab is a minute 0.01-inches thinner than Apple's tablet, but more importantly it's the first tablet on the market to give the iPad 2 a run for its rail thin form factor. On top of that, the $499 slab packs a dual-core Tegra 2 processor, 1GB of RAM, two cameras, and 16GB of storage space. Indeed, Samsung has been nimble enough to react, but the time has come to find out if the Tab 10.1 has what it takes to really challenge Apple's popular tablet and the slew of other Android 3.X tablets. Hit the break for our full review. 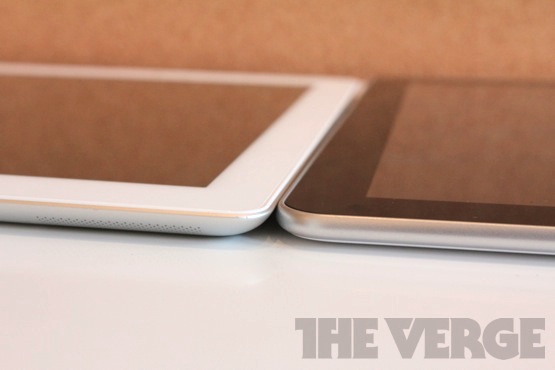 I think the point is fairly clear: the Tab 10.1 is thin. Like really thin... at least in comparison to the other Android 3.X tablets out there. And yes, according to Samsung's measurements it's even thinner than the iPad 2. However, as you may have guessed, the difference isn't noticeable to the naked eye, and if you didn't have a measuring tape on you, you'd probably never know one was trimmer than the other. Where you will notice the difference between the two is on weight. The 1.24-pound Tab 10.1 feels lighter in hand than the 1.33-pound iPad; in actual use, however — holding it up to read, etc. — I'd say that weight difference isn't all that obvious. Still, in comparison to the Xoom or ASUS Eee Pad Transformer, the Tab 10.1 is much easier to manage while laying in bed or lounging around. But yes, sacrifices are made to achieve that thinness. The only ports you will find on this tablet are 3.5mm headphone and proprietary charging jacks. There is a volume rocker and a power button, but forget that microSD card slot or micro-USB port.

Beyond all those numbers and details, the Tab 10.1 feels pretty great in hand, and I actually prefer the curved edges of the Tab to the iPad's sharper sides. The tablet's white plastic back isn't actually all that plasticy, and to appeal to the less-techy audience, Samsung's ditched the Android motif that adorned the Special Edition Tab 10.1. However, the aluminum back of the iPad gives it the upper hand in terms of build quality — although, as we just went through, it also results in it weighing a tad more. It's the good old plastic versus metal debate. But I don't want to stray from the point here: the Tab's hardware is well-made, well-designed, and yes, it is absolutely a real iPad competitor in terms of form factor. 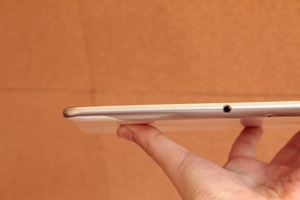 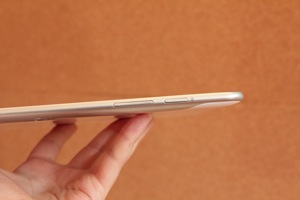 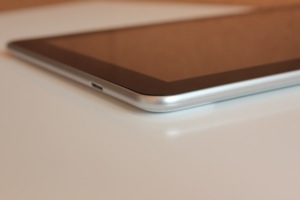 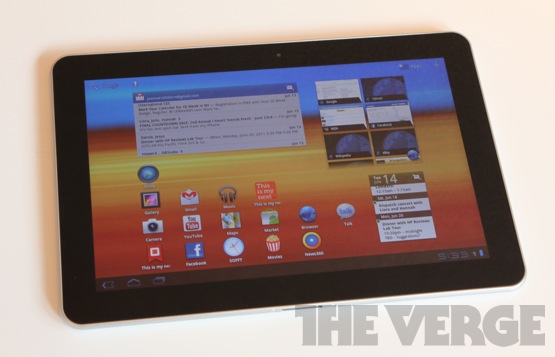 Samsung's not using an expanded Super AMOLED Plus or IPS panel here, but the quality is still top-notch. The 1280 x 800-resolution screen has superb viewing angles; there's no color distortion at any angle and images appear bright even off axis. I didn't have the Transformer to compare it to, but brightness seemed on par with the iPad 2's panel. In fact, while looking at this very site, the orange box looked a bit brighter on the Tab's display.

The Tab 10.1's two small speaker slits were louder than I anticipated, but still sounded relatively tinny. There's no question that the Warblers' version of "Soul Sister" (don't judge me for loving Glee!) sounded much fuller and balanced coming out of the iPad 2's rear speaker grill, although to compensate, Samsung includes a set of earbuds in the box. And they're actually surprisingly comfortable. 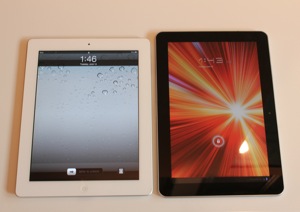 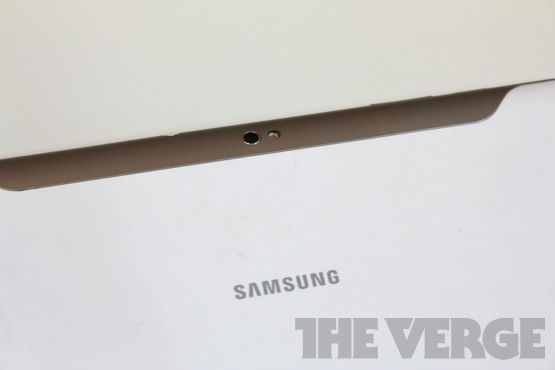 The 3 megapixel camera and its LED flash are positioned on the on the top rear of the slab, and it's actually one of the better shooters I've seen on a tablet. I realize that's not exactly saying much, since most of the cameras on these tablets have been downright horrendous, but the lens has at least taken some decent shots over the past few days. Most of them have been clear, which I cannot say of any of the extremely grainy images I've taken with the iPad 2. That said, the auto-focus still feels slower than most smartphones and caused me to miss quite a few moving shots. The 720p video was similar to what I've seen on other Android 3.X tablets; the footage just doesn't look all that HD and looks washed out. Sadly, there's no zoom option in either mode.

Naturally, the front-facing cam didn't take as sharp images, but they seemed quite a bit less grainy than shots captured with the iPad 2, Transformer, and Acer Iconia A500. Similarly, video was smooth and clear when chatting with a friend over Google Talk. Samsung's also tweaked a few of the software camera controls. Conveniently, it has exposed a number of the settings – including white balance, resolution, etc. – on the left hand side of the screen, so you don't have to go digging through the menus. You can also apply different scene modes as you're shooting. 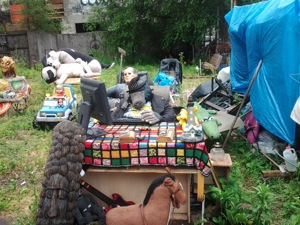 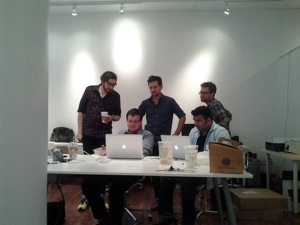 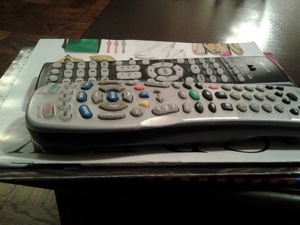 The software story on the Tab 10.1 is actually fairly interesting. Back at CTIA, Samsung demoed TouchWiz UX for Honeycomb, which included a new app shortcut tray and some retooled menus. However, the Tab 10.1 of the present comes with stock 3.1. That's right, it's basically a clean Google experience here, or at least it is for now, since Samsung plans to roll out some "enhancements" in the near future. When those will arrive is unclear, but Samsung has told us that it will be an optional update.

By and large, the Tab 10.1 runs an untarnished version of 3.1, but Samsung's made some small tweaks. In addition to the aforementioned camera controls, it's also redesigned the keyboard. The keys are easier to read and the white background makes it easier to type on than the stock Honeycomb layout, if you ask me. Other than that, Samsung preloads a few apps, including QuickOffice HD, Pulse news reader, and Samsung's Music Hub and Apps. The latter is Samsung's very own App Store — something that seems to be a trend on these tablets — but it's incredibly half-baked at this point. There are only six apps in the storefront and that "Android, Samsung Apps Open" banner (pictured above) just seems like some tacky afterthought. 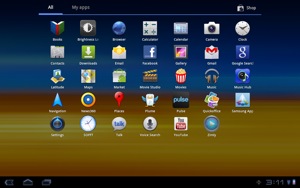 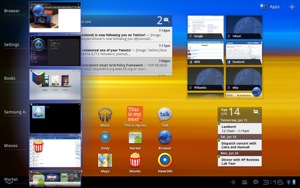 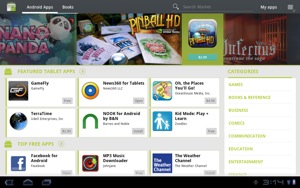 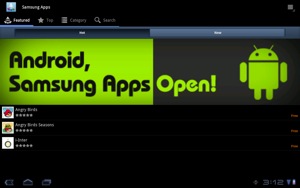 The first part of that issue — the lack of tablet optimized apps — is really Honeycomb's Achilles' heel right now. While Google has fixed a number of the stability issues and even began to polish up the interface with resizable widgets, etc. the platform still seriously trails iOS in terms of app selection. To be honest, it's not just numbers for me. I don't care about having 65,000 apps at my disposal, I care about having a selection of quality tablet apps available to me when I sit down with my tablet. The selection has gotten somewhat better, but for me personally, there's still a lack of solid news, Twitter, and general tablet apps that can compete with the ones I have on my iPad. 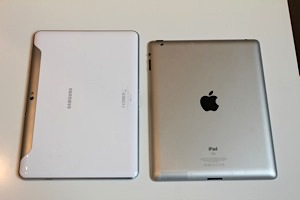 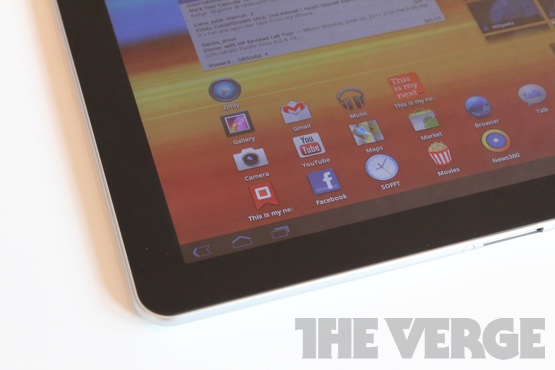 As I mentioned in my initial 3.1 hands-on, the new version brings a lot of stability and speed improvements to Honeycomb, and the Tab 10.1 certainly reaps the benefits. The 1GHz dual-core Tegra 2 processor and 1GB of RAM pushed things along smoothly and allowed for a solid amount of multitasking. Scrolling in the browser was fluid as was playing HD games like Dungeon Defenders and Contract Killer. However, compared to the iPad 2, the experience doesn't feel as fluid and parts of it are stuttery. Flash is one of those parts — performance was what you'd expect: it slowed down the browser a bit, but videos played back smoothly. As with most of these tablets, local and streaming 720p video purred along.

Battery life has been somewhat of a mixed bag in my testing. While in actual use I have been able to squeeze out about seven to eight hours of runtime, the Tab 10.1's 7000mAH battery didn't fare as well in our video rundown test, which loops the same standard definition video at 65 brightness and WiFi on. It only lasted five hours and 33 minutes, which is about three hours shorter than the Transformer and five shorter than the iPad 2. Engadget claims to have gotten ten hours on the same test and Laptopmag got about 8.5 hours on its web surfing test, but AllThingsD got a similar 5.5 hours on a video rundown test. It seems a bit all over the place, but based on actual usage, I'm confident that the tablet will push out close to eight hours of juice of basic browsing and application use.

The Tab 10.1 is now the thinnest tablet on the market and yet doesn't sacrifice battery life or performance for its trim dimensions

Samsung may not always make moves we understand, but its decision to go back and revise its first Honeycomb tablet after the iPad was announced was a very very smart one. The Tab 10.1 is now the thinnest tablet on the market and yet doesn't sacrifice battery life or performance for its trim dimensions. Does that mean it's better than the iPad 2? In some respects, yes. Its camera takes better shots and it's lighter to hold, but Honeycomb's trailing app selection continues, and will continue to, hold back even the most miraculous Honeycomb hardware. If you're in the market for an Android tablet, the Tab 10.1 is hands down the sleekest money can buy. The $550 ASUS Eee Pad Transformer does add an incredibly unique dimension with its keyboard dock, but as a standalone tablet, I much prefer Samsung's well-revised Tab 10.1.