Apple's added hot new processors and dropped the optical drive — is the trade off worth it?

The Mac mini has long been the lovably lost scamp of the the Mac family, produced and sold with as seemingly little fanfare as possible. (Quick: where are the minis located in your local Apple store?) No matter: we’ve seen minis used as everything from high-load-bearing servers to HTPCs to just plain old desktop machines. People love the damn thing — it’s one of the smallest and most power-efficient compact PCs available. The only problem was that the mini has traditionally offered fairly poor performance for the money: although it was given a strikingly beautiful case refresh last year, the internals were left to stagnate with a 2008-vintage Core 2 Duo processor, and the base price went up to $699.

Well, thank heavens for processor bumps, because that’s all gone away: the new base Mini features a 2.3GHz dual-core Core i5 and a newly-lowered $599 base price. There’s also a $799 model that bumps the processor up to a 2.5GHz Core i5 and adds in a discrete AMD Radeon HD 6630M GPU, and a new server configuration with dual 500GB drives and a 2GHz quad-core Core i7 for $999. And in a move that you probably saw coming a mile away, not one of these machines has an optical drive of any kind anymore — there’s just a plain slab of aluminum up front. In all, the mini’s finally been given some serious muscle to go with its sleek looks — but is it enough? Read on for the full review.

There’s not much to say here, since the Mini remains outwardly unchanged. It’s still one of the most beautiful PCs ever made; everyone who sees it wants to pick it up and handle it, for some reason. But it’s still very much a desktop computer, no matter how small it is: it actually rests a few millimeters off the ground on that round black panel, both for airflow and so Wi-Fi signals can reach one of the two antennas concealed within the base. (Bluetooth and the other Wi-Fi antenna are located on the plastic back panel.) That bottom panel of course also doubles as the machine’s main access door: a quick quarter turn and you’re staring at the RAM slots. Unfortunately, only the RAM is designed to be swapped out, and getting at the drive bays is much harder. That’s doubly unfortunate, since the mini can actually hold two hard drives but the standard consumer configurations only come with one — it would be nice to pop open the cover and install a second drive without having to do major surgery. (You can of course configure any mini with two drives out of the gate, but what’s the fun in that?)

Now that the optical drive has been excised, there’s very little else to see: the front has a white power LED and an IR port for the Apple remote, and the back holds the same generous array of ports as the previous mini. Most notably, the four USB ports and single FireWire 800 port have been joined by a Thunderbolt port, which offers the promise of significantly higher-performing peripherals in the future, although very few are available now. (You’re a special kind of crazy rich if you’re buying a $599 mini to plug into a $999 Apple Thunderbolt display.) The mini is also famously Apple’s only computer with an HDMI port — Apple knows some people use the mini as an HTPC, and the mini’s Display preference pane has a special underscan control to make connecting to a TV easier.

As an aside, it’s somewhat interesting that Apple ships an HDMI-to-DVI video dongle in the mini’s box, and not a Thunderbolt mini DisplayPort-to-DVI dongle. That means you can’t connect a display greater than 1920 x 1200 to the mini without buying another adapter, which probably isn’t a huge problem, but it’s worth noting. I used a standard mini DisplayPort to DVI adapter I had lying around to drive my 24-inch ViewSonic external display and it worked fine. 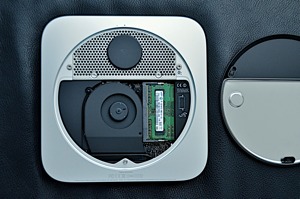 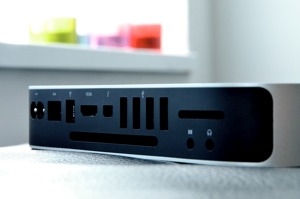 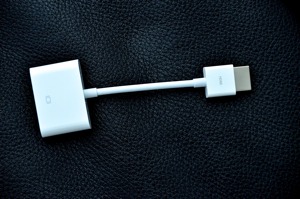 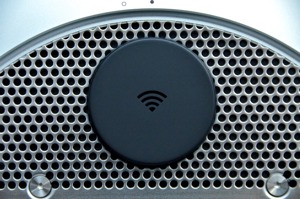 And lastly, I can’t end this section without calling out the mini’s lack of an optical drive one more time. I’ve dinged Apple for not putting Blu-ray drives in its machines in every single Mac review I’ve written over the last few years, and it appears Cupertino’s finally upped the ante by just eliminating optical media entirely — yes, the Air’s never had an optical drive, but until this last revision it was never a credible primary machine. With the new Air and now the mini, it’s a bit more serious: Apple definitely expects some people will use these machines as their only computers, and no optical drive means the company is fully committed to the idea that everything — music, movies, and now apps and even OS upgrades — will come down your broadband connection. (Yes, you can still buy Apple’s $79 external DVD drive, but let’s get real.)

That’s all great and visionary and so forth, but it still stings that such an otherwise brilliantly capable HTPC can’t play Blu-ray discs — the easiest and best consumer HD format available. Of course, a standalone Blu-ray deck is pretty cheap nowadays, so it’s not a huge deal, but it does sort of feel like Apple decided the easiest way to shut me up was by totally blowing up my dreams and then insisting that I only be allowed to rent a pixelated 720p video of the explosion from iTunes for $4.99 during a studio-mandated 60-day rental window. Thanks, Apple. 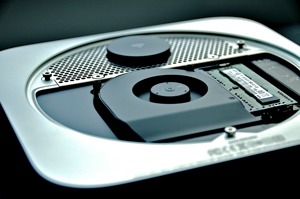 Performance-wise, the mini definitely holds its own: we were sent the $799 model that adds an AMD Radeon HD 6630M GPU to the dual-core 2.5GHz Core i5 CPU, and the combination was good for a 6523 score in GeekBench. That’s about right: it’s a little bit faster than the new dual-core 1.7GHz Core i5 Air, which scored a 5331, but slower than both the quad-core 3.1GHz Core i5 iMac and the quad-core 2.2GHz Core i7 MacBook Pro, which put up scores of 8849 and 8844, respectively. In real life, these numbers are all fairly meaningless: the mini was more than able to handle a normal workload of browsing, writing, playing music, and watching videos, and the discrete GPU meant we were able to get a solid 60fps in Portal 2 and around 50fps in Half-Life 2: Episode 2 at 1920 x 1080. That’s a far sight better than the old mini, which struggled with gaming — in fact, you could probably use the Radeon-equipped mini as a big-screen TV gaming machine if you were so inclined, although you’d probably want to boot into Windows for that sort of thing. (Or, you know, buy a Windows PC.)

Actually, let’s talk about that Windows PC comparison for a second, since Apple markets the mini as a drop-in replacement for Windows users who want to switch to the Mac. How does our $799 mini tester stack up against the PC competition? It all depends on how much you value the mini’s beautiful case and thrifty power usage over pure performance and expandability: Dell will happily sell you a quad-core 2.9GHz Core i5 Inspiron 620 with more RAM, more storage, and a Radeon HD 6450 for $649, but you’ll also be getting a tower case and almost three times the power draw. (It’s interesting to consider future mini expansion, however: any sort of PCI Express card can theoretically be repackaged as a Thunderbolt accessory, but how that market will develop remains to be seen.) In the end, you’ll have to ask yourself what your priorities are — and how badly you want to run OS X. 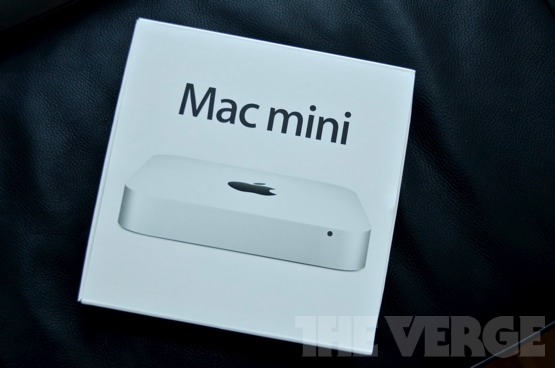 Speaking of OS X, the new minis are obviously loaded up with Lion, which is sort of an interesting proposition on this machine. Lion is all about the grand addition of iOS-influenced multitouch gestures to OS X, but unlike every other Mac, the mini doesn’t come with any input devices at all — there ain’t no Magic Mouse in this house. That means dropping a mini into your existing keyboard, mouse, and monitor setup won’t actually give you the full Lion experience, and I actually found using Lion with only my beloved eight-button Logitech MX 1000 rather clunky until I remapped one of the buttons to open Mission Control. Even still, you’ll be missing out on swiping to navigate in Safari and swiping between full-screen apps using a regular mouse. You’ll have to experiment to see how much you care about this, but I’m convinced Apple will start shipping the Magic Trackpad as the default pack-in with the iMac sometime soon, and if you’re buying a mini you might want to splurge on one to try out Lion’s new features.

Oh, and all you HTPC nuts out there should remember that Front Row has been killed off in Lion, so now you’re really on your own when it comes to using the mini in the living room. It’s not a huge deal, since apps like Plex, EyeTV, Boxee, and XBMC have all long since surpassed Front Row, but it’s worth mentioning — the mini is now a completely blank canvas when it comes to the living room, and unless you’re willing to get your hands dirty, you’re probably better off buying an Apple TV or Roku box. 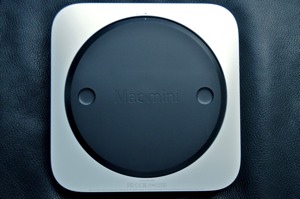 Unlike the new MacBook Air, the new processors in the Mac mini don’t suddenly make it a dramatically different kind of product; if the new Air with Lion represents Apple’s vision of what traditional computing should look like in 2011 and beyond, the new mini is more like a concession to the idea that perhaps not everyone else has quite caught up. It’s a tiny desktop PC that can go anywhere and hook up to nearly anything, and if that’s what you’re looking for you’ll leave extremely happy: the mini offers solid performance in a stunning case that’s unmatched in the industry. Just make sure you spring for a Magic Trackpad — and maybe a standalone Blu-ray player while you’re at it.