Fusion Garage is back with another tablet — will this one find success?

The Fusion Garage Grid10 had a story before it was even a real product: thoroughly embarrassed by the spectacular failure of last year’s JooJoo tablet, Fusion Garage conducted an over-the-top viral marketing campaign for a fake company called TabCo before CEO Chandra Rathakrishnan delivered a pre-taped keynote address revealing his new tablet. Unlike the Intel- and Linux-powered JooJoo, the Grid10 is a much more familiar combination of Android and a dual-core Tegra 2 processor, but you won’t mistake this for any other Honeycomb tablet — Fusion Garage has taken the core of Android and built an entirely separate gesture-based operating system called GridOS on top. You won’t find any Google apps here; everything from the mapping app to the mail client is a Fusion Garage original, and apps are provided by the Amazon Appstore. It’s an unusual riff on what’s become the usual tablet strategy, and it’s all priced at just $299 — but is it actually worth it? Read on for the full review. 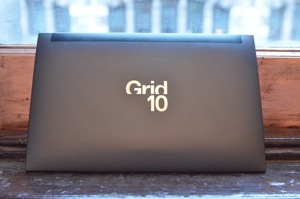 Any discussion of the Grid10′s hardware has to begin with the 10.1-inch 1366 x 768 display: it’s among the worst I’ve ever seen on any device. The viewing angles are so poor that any slight horizontal shift off-axis results in the display almost totally inverting and / or disappearing — and since you can’t ever really hold a tablet dead-on, you’re always looking at some sort of display distortion. Making matters worse, color reproduction was fairly inaccurate, the backlight occasionally flickered, and the brightness control has a range so small I originally thought it was non-functional. Grid OS might be wonderful and innovative, but it was hard to even use the Grid10 for any length of time because the display is so poor.

Display aside, the rest of the Grid10 is unremarkably anonymous: there’s a single front-facing camera (but no built-in video conferencing software), a headphone jack, microSD slot, and proprietary power plug on the right, and the sleep / wake button, micro SIM slot, and microphone on the left. You’ll also find a pair of stereo speakers located on the bottom of each side — right where your hands rest, unfortunately. There’s also no hardware volume control; you change the level using an on-screen Grid OS widget. It’s fine most of the time, but it’s hard to access when you run an Android app — more on that later.

Oh, I should also mention that the included power adapter is really, truly cool. Everyone who saw it wanted to know what it was for. That’s more than unusual in the Verge offices.

We’ll give this much to Fusion Garage: Grid OS is like nothing else out there. It’s built on the core of Android and can run Android apps, but there are almost no other similarities to Google’s OS or any other operating system out there. As the name would imply, the launcher is grid-based, with re-organizable "clusters" of apps and shortcuts arranged modularly on an infinite virtual grid that extends past the 6 x 11 grid spaces visible on screen at once, and there’s a nice parallax scrolling effect when you pan around. The grid can be organized any way you like, and individual clusters renamed and moved at will, which is nice. The essential utility of the grid interface is somewhat questionable, however — it’s not exactly clear why you’d want to arrange your apps in an undefined grid, and the "Apps" cluster quickly grows to unwieldy size as you download more and more apps. You can move around the grid a little bit faster by scrolling on the little nav-map in the upper right side, but it would probably be a lot simpler if you could just pinch-to-zoom in and out of the grid.

General navigation is entirely gesture-based, which is fine in theory but rather unwieldy in practice. There are five basic gestures that control most everything on the system, and understanding when and where they all work requires a significant learning curve — especially since the system isn’t always responsive enough to confirm your actions. A two-finger swipe from the top brings you to the home screen and two fingers from the right takes you back, while two fingers from the left brings up the "Heartbeat" notification panel and task manager. A single swipe from the corner brings up the browser chrome, and two fingers from the bottom brings up the Android menu when running an Android app. Sound confusing? It is. It gets a little better in practice, although you can’t really fly around — the system really only responds to fairly slow and deliberate gestures, and nothing happens at all if you don’t start a gesture in exactly the right spot. A physical home button would go a long way towards making this all more intuitive.

In addition to gestures, the Grid10 offers another fun party trick: you can unlock the home screen by just signing your name with your finger. I had about an 80 percent success rate after I trained the system to recognize my finger, which isn’t bad, but overall it was pretty slow when I just want to get in and get working. (You can just draw a quick shape to speed things up, or set a standard alphanumerical password, however.)

Running apps and notifications are managed in the Heartbeat screen — a long press on an app icon brings up a wheel menu that lets you close the app, pin it to the Hearbeat list for easy access, or bring up a more detailed management screen with more options. The long-press wheel menu also shows up in other parts of the system, most notably the browser and text windows, where it’s used for copy and paste and to initiate quick searches. The text selection UI looks just like Gingerbread, which isn’t surprising given Grid OS’s Android roots, and it works fairly well, although I had occasional problems getting the selection handles to appear after a long press. 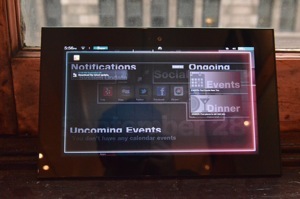 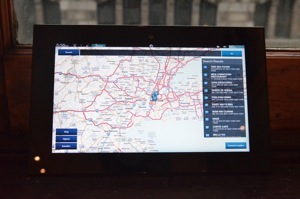 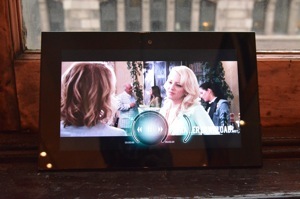 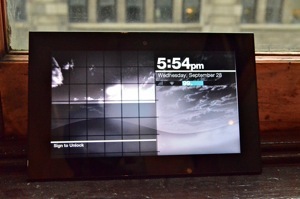 Lastly, the system features an interesting universal search that’s brought up by tapping a globe icon in the center the menu bar. Entering a search term brings up live results from whatever’s local on the system, Bing, and "Star," which offers "intelligent suggestions" on your search terms. It all works pretty well, although there’s some occasional overlap between the web results and Star results.

All in all, Grid OS is an interesting departure from traditional UI concepts and offers some refreshingly new ideas, but it’s simply not polished or ready enough for prime time. Animations were frequently laggy, several features offer more style than functionality, and we experienced a few spontaneous reboots and app crashes. There’s also a general clunkiness to GridOS that’s hard to explain — some elements are very nicely designed, but a lot of it looks and feels almost roughed in. It’s hard to believe I’m saying this, but I much preferred the look and feel of the original JooJoo’s UI — Grid OS offers far more functionality, but far less overall beauty. 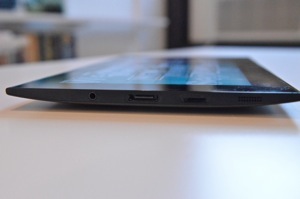 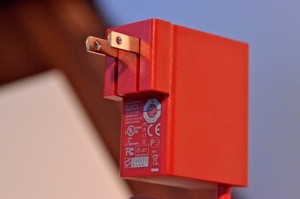 Since Grid OS is built on Android, it’s possible to run nearly any Android app — but since the Grid10 isn’t a Google-approved device, familiar Android apps like Gmail, Android Market, and Google Maps aren’t present. Instead, Fusion Garage relies on the Amazon Appstore for third-party app distribution. What’s interesting is that Amazon doesn’t seem to have formally partnered with Fusion Garage, and the actual Appstore app isn’t preloaded on the Grid10. Instead, there’s a link to the .apk featured on the homescreen — but the app doesn’t replace or delete the link once you install it, so it’s not a particularly tidy process.

Android app compatibility was basically flawless once the Amazon Appstore was installed. I tried Kindle, Angry Birds, Twitter and few others — the only major flaws were that Android apps continued to play audio at the lock screen if the tablet was locked or went to sleep while they were running, and the software volume control was impossible to access while in Android apps, which ruined a couple gaming experiences. And of course all the apps I ran were upscaled Android phone apps; Amazon doesn’t actually have any Honeycomb tablet apps in its store.

Fusion Garage has also built in several of its own apps, including a unified messaging client, a calendar, a custom maps app, a contacts app and a media player. All of these adopt the general Grid OS aesthetic, and they can also theoretically sync with external services like Facebook, Gmail, and Twitter, although I was never able to make Gmail sync work. The browser offers Flash compatibility, tabbed browsing, and a novel split-pane view that lets you browse two sites at once. It’s not the best mobile browser I’ve used, but it’s certainly passable. And it had better be: all of the other icons pre-populated on the Grid OS homescreen are really just shortcuts to various web sites.

There’s a 1GHz Nvidia Tegra 2 inside the Grid10, but nothing ever felt "fast" while I was using it. Animations chugged along occasionally, the interface took several seconds to respond to gestures, and panning and scrolling around web pages started off fast and then began to noticeably stutter. The bigger problem is battery life: Fusion Garage claims seven hours, but we only got around 4.5 hours on our automated battery test, and watched the battery meter take severe hits during moderate use.

Our review of Fusion Garage Grid10 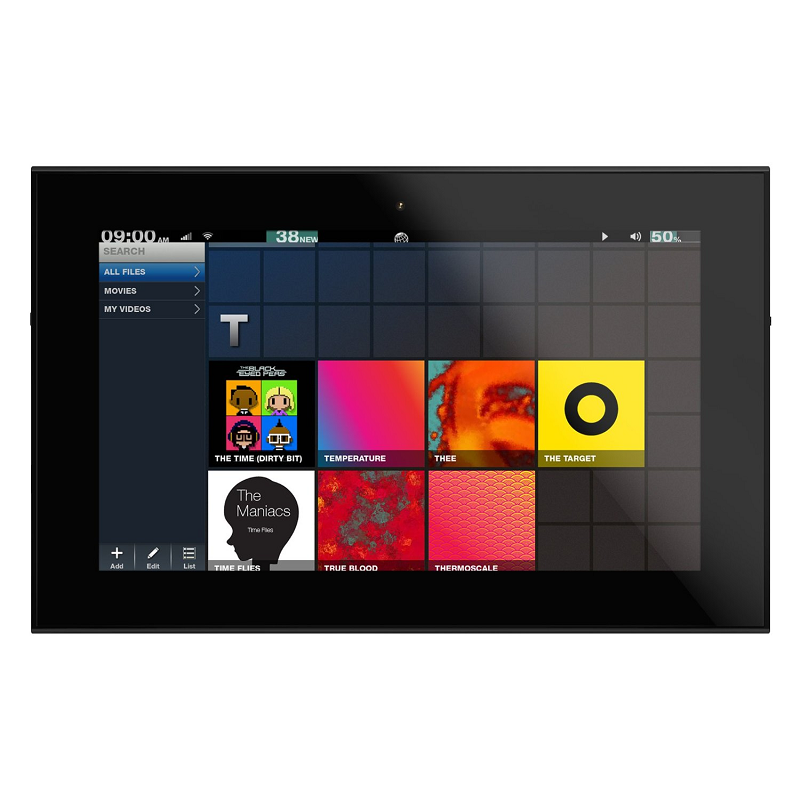 The Grid10 simply doesn’t measure up

This is pretty simple: although Fusion Garage is to be commended for developing a novel new operating system with a slew of interesting and innovative UI features — something few other companies have ever done — the Grid10 as an integrated package of hardware and software simply doesn’t measure up. The display alone is so poor as to utterly ruin the user experience, and Grid OS lacks the level of polish, stability, and performance it needs to compete against iOS and Honeycomb. (And it certainly doesn’t have the price tag to match up with the Amazon Kindle Fire.) That said, it’s clear Fusion Garage (and its mysterious investors) are committed to developing a serious tablet competitor — we’ll see what another year brings.