The $450 Iconia A500 costs less than the iPad and the Android competition, but are the sacrifices worth it?

Share All sharing options for: Acer Iconia Tab A500 review

Whether it likes it or not, Acer's got a reputation in the consumer electronics business: its computers are rarely the most well made, but they're always the most affordable on shelves. It's exactly what launched Acer to become a top computer manufacturer a few years ago and what made the company so successful in the netbook market. The 10.1-inch Iconia Tab A500 is Acer's first attempt at applying that thinking to tablets, and as the majority of Honeycomb tablets cost north of $550 and are being sold with pricey 3G plans, the $450, WiFi-only tablet comes at an absolutely perfect time. The A500's specs match the rest of the Honeycomb tablets – it's got a dual-core Tegra 2 processor, 16GB of storage, dual-cameras, and a 1280x800-resolution display – but for $150 less than the others, does it suffer from Acer's typical sacrifices in screen and manufacturing quality? Can the Taiwan company succeed at taking on Motorola's Xoom and LG's G-Slate not only in price but in actual usability and features? Hit the break to find out in full review. 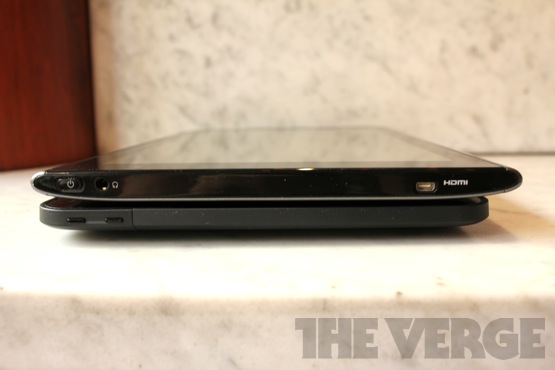 We've been hearing lots of talk of tear-shaped hardware lately, and coincidentally, the Iconia Tab A500 follows a similar design philosophy. When held in landscape mode, the right and left edges funnel inwards, and while the aesthetic choice may seem minor, it actually made it easier to hold than the Xoom's boxy, chiseled back. There's also another major design component Acer's got Motorola beat on – unlike the Xoom's power button, which is located on the backside, the Iconia's glowing on / off nub lives on the left edge. Again, it may seem like a small detail, but it makes a world of difference when you want to wake up a tablet immediately and get online. My only complaint about that button is that it and the plastic edge it lives on feels a bit cheap in comparison to the rest of the slab, however, those are really the only parts of the tablet that feel a bit cheap. The silver, brushed aluminum, which covers the back and flows onto the front, doesn't only look classy but gives the entire product a nice rigidity. As I intimated in the introduction, I was a bit worried about the overall quality of the device, but I've really been pleasantly surprised at how sturdy the hardware seems. (Note: I still haven't gotten the ASUS Transformer to review so I'm not making direct comparisons to that product here.)

It's a fierce tablet size war out there, and while the Iconia Tab A500 stacks up rather well against its Honeycomb rivals, the iPad 2 wins by quite a bit on both thickness and weight. The handy chart below has everything you need to know, and though the .52-inch / 1.6-inch Iconia is slightly heavier than the Xoom, I wouldn't put much weight on those numbers -- in hand it just feels lighter and slimmer. Of course, neither of these 10-inch Android tablets are as easy to hold as the 9.7-inch iPad 2 – for that, we must wait on Samsung's .33-inch Galaxy Tab 10.1.

The Iconia does beat the rest on port selection; its left edge is home to a 3.5mm headphone jack and a mini-HDMI port, while the right side holds full-sized USB and Micro USB ports. Under the port cover on the top you'll find a MicroSD card slot, taped-over SIM card slot, a rather stiff volume rocker, and a rotation lock switch. The USB 2.0 port is certainty a bragging right for the Iconia, but it really shouldn't be at the moment – I couldn't get it to read an external hard drive or transfer files from my laptop. I finally got it to recognize a USB flash drive but only in the Gallery application. 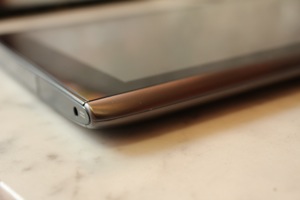 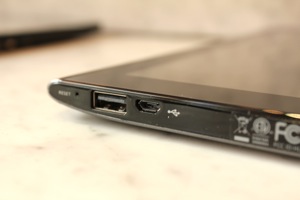 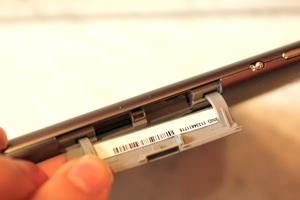 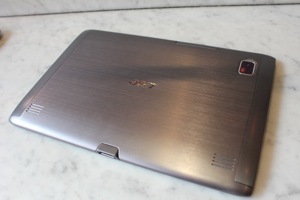 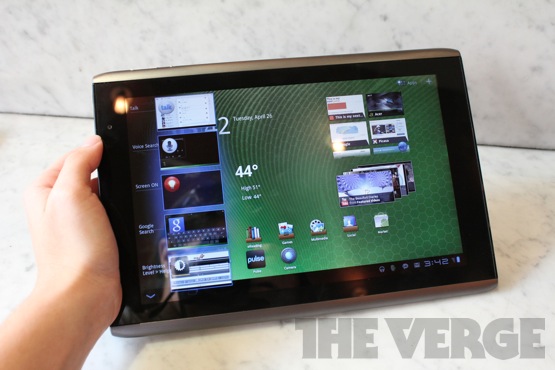 Obviously, the heart of the Tab A500 is its 10.1-inch 1280x800-resolution display, and well, it's actually quite a healthy organ for the price. The screen is extremely bright and crisp – just as bright as the Xoom, though not a bright as the iPad – and while it's not an IPS panel, both horizontal and vertical viewing angles were more than adequate. At some angles the display did look a bit washed out, but looking at it dead-on or with it slightly tilted while lying down was never an issue. Like the rest of the tablets out there, the glossy screen picks up loads of fingerprints streaks (seriously, it's a photographer's nightmare), although to Acer's credit, a handy "Notebook Cleaning Cloth" comes in the box. The touchscreen itself was responsive, though the haptic feedback was so weak that I actually disabled it.

The Iconia's two stereo speakers are situated on the bottom left and right corners of the back of the device, which makes blocking them when you're holding the tablet in landscape mode way too easy. Still, the speakers, which are matched with Dolby's Audio software, provided some surprisingly nice playback. The standard settings – with Dolby powered off – created for incredibly tinny sound, but after futzing with the Dolby settings, Kanye's "Dark Fantasy" sounded shockingly full. The two speakers are a notch above the Xoom's in volume and quality, but they're not as loud as the ones on the iPad 2 or the Playbook – Josh has actually been pretty smitten with the latter. 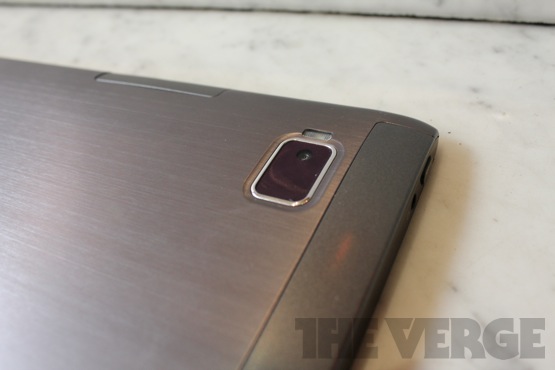 The speaker placement isn't exactly ideal, but it's nowhere near as bad as where Acer injected the 5 megapixel camera. The rear shooter is located in the top left corner, and without fail I blocked the lens with my left index finger every time I went to take a shot. When I wasn't taking pictures of my finger, the camera snapped incredibly mediocre shots. The auto-focus was relatively slow, colors were muted, and the images just look grainy. Flat out, they were just not as crisp as the shots I've taken with my iPad 2 or Samsung Galaxy Tab, even when viewed on my laptop. Capturing 720p video on the tablet wasn't much better – indoor and outdoor footage just doesn't look all that high definition. I also noticed it having a hard time adjusting the white balance so some of the footage I shot has a yellowish tint to it. Also, as Josh has said a few times now, there's really no natural way of holding up a 10.1-inch viewfinder when you're walking around. It's just awkward.

The front-facing 2 megapixel camera is comparable to most of the others I've seen on other Honeycomb tablets. When I called a friend through Google Video Chat she could tell I wasn't wearing any makeup – good news for the camera, bad news for me. Seriously though, the lens is fine for taking self-portraits and making video calls. 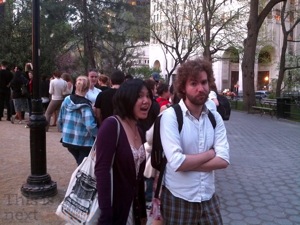 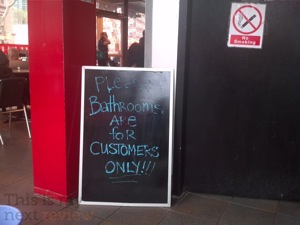 Acer doesn't promise an untouched Android 3.0 experience like the G-Slate or the Xoom, but the only real additions the company's made is in third-party applications. To be honest, the apps themselves aren't all that useful as Honeycomb provides most of the same raw media functionality, but here's a short look at a few of them.

This is probably one of the most interesting apps. Acer places your photos in a spiral notebook-like interface and allows you to use the accelerometer to turn the pages by tilting the tablet from side to side. I have no idea why you'd want to do this, but it's fun for a minute or two.

You can log into your Facebook and Twitter accounts here and then use the jog wheel on the left side of the display to scroll through your feeds. It's pretty neat, but it's lacking what it takes to be a real Twitter replacement -- you can't upload pictures or retweet. 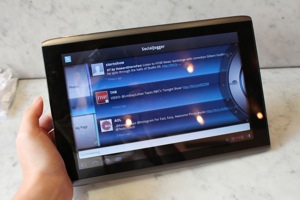 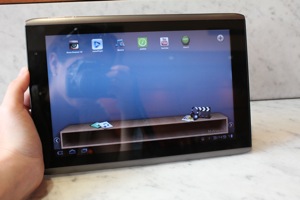 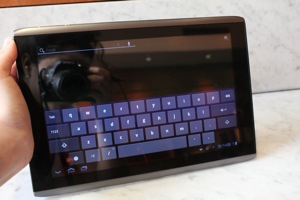 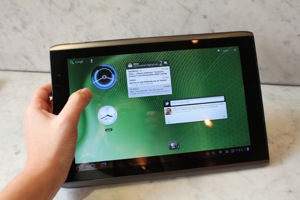 This is an additional reading app, but it doesn't offer anything over Google's Books. Also, you can't download books from the LumiRead store in the US at the moment.

This is really Acer's DNLA application. I didn't have any luck accessing my phone's media, but when used as a basic multimedia viewer the app is actually pretty decent.

As for Honeycomb itself, I defer to Josh's previous reviews on the operating system. In short, I absolutely love the multitasking ability, the widgets, and the Gmail experience, but the one thing holding me back from replacing my iPad with a Honeycomb tablet is the lack of third-party software. As I've complained about, there isn't a Twitter client that's optimized yet for the bigger display and there are still only about 60 apps available for the software. It's also nearly impossible to distinguish between tablet and phone apps in the Market at the moment. 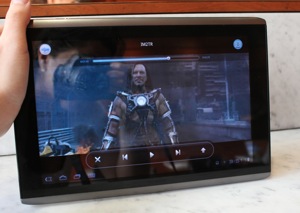 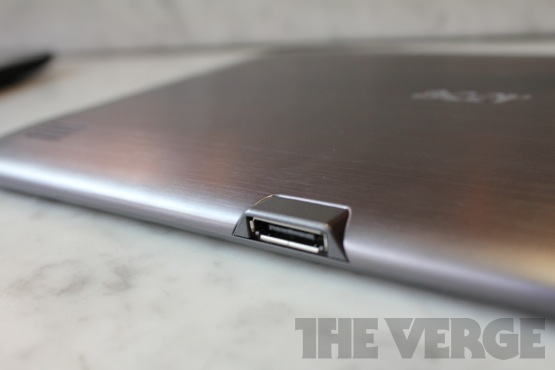 The Iconia Tab A500 is powered by a dual-core 1GHz Tegra 2 processor, 1GB of DDR3 RAM, and packs 16GB of storage. The performance is akin to what I've seen on other Honeycomb tablets -- there's a slight yet noticeable lag when there are a number of applications open, but overall it is able to keep up. To its credit, I haven't encountered any force closes or application crashes on the Iconia in the past week – my Xoom's browser will periodically crash. Both 720p and 1080p videos played back smoothly on the tablet -- I didn't test the HDMI out capability, but it will only output 720p video for the time being. The 1080p support will be an update.

Surprisingly, battery life has been a mixed bag with this tablet. In my real world use – surfing the web, reading emails, watching some YouTube clips – I have gotten close to 7.5 hours of intermittent use. However, on my video rundown test, which loops the same standard definition video with brightness set to 65 percent and WiFi on, the two 3260mAH batteries lasted six hours and 32 minutes. That's not quite as long as Acer's promised eight hours of HD video play or the other tablets we've tested – the Xoom lasted over eight hours and the iPad closer to ten and a half. On the bright side, the tablet didn't take that long to charge up, but beware -- the three foot power cord is insanely short.

If you have your heart set on a Google-powered tablet, the Iconia blends quality and affordability

To be honest, the Iconia Tab A500 exceeded my expectations. After years of reviewing Acer laptops with crappy LCDs and cheap plastic parts, I expected the company to take a similar route with its tablets, but instead, I was impressed with the manufacturing quality (at least for the price), the bright and crisp display, and rather-untouched software experience. Sure, the cameras aren't great and it trails other tablets in battery life, but for $450 those things seem forgivable, especially when you consider the LG G-Slate's or the Xoom's respective $630 and $600 price tags. Of course, the real question is, does it make sense to shell out an extra $50 to snag the iPad 2? At this point, that $50 makes a load of difference in usability since the Honeycomb app ecosystem is still miles behind iOS and Apple's tablet is much thinner and lighter, but look, if you have your heart set on a Google-powered tablet, the Iconia blends quality and affordability, which is something I haven't been able to say about an Acer product for a long time.