Motorola's first 4G phone for Sprint is a beast... but can it take the Evo 4G's crown?

The Photon 4G has arrived for review. The device is yet another contender for the oft-sought (though rarely nabbed) King Android crown, and the well-equipped phone is one of the first, serious Motorola entries to Sprint’s lineup. The device is no slouch, nor is its sales pitch. It’s the first WiMAX device from Motorola, and it’s a heavyweight in the specs department, boasting a dual-core Tegra 2 CPU, 16GB of storage onboard (with a total possible of 48GB), and worldphone capabilities. All that power comes housed in an unusual — though eerily Droid Charge-like — package, and seems poised to yank the rug out from under HTC’s excellently performing Evo 4G. But does the Photon have the juice to turn eyes away from the carrier’s heavily-advertised star player, and more to the point — can it bring customers back to Sprint (or at least keep them around)? All those questions and more are answered below, so read on for our full review! 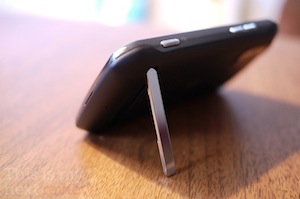 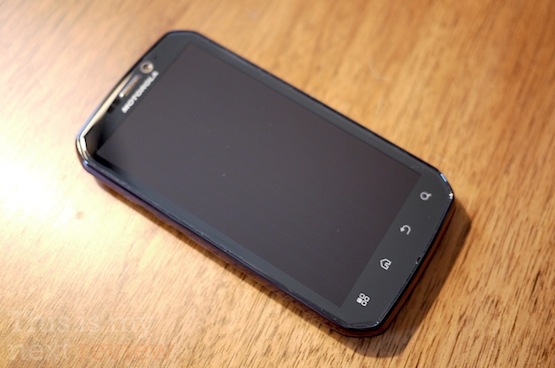 The Photon 4G is definitely some kind of looker, though it’s probably going to require a unique palate to fully appreciate its charms. The slab phone has odd, angled edges on all of its four corners, while the back of the phone is coated in a soft-touch material that’s kind to your hands. The phone has metallic highlights throughout, with a rippled volume rocker that feels particularly nice to interact with, and on its backside you’ll find a metal kickstand (which can knock the phone into a "dock mode" when you flip it out).

The Photon boasts a dedicated camera button (which lets you snap photos quickly with its 8 megapixel shooter and shoot video in 720p), and has both a Mini HDMI and Micro USB jack slotted next to each other. The device also has the prerequisite light sensor, front-facing camera, and Android soft-touch buttons along its face. The phone is a bit thicker than the Charge (0.48 inches versus 0.46 inches), though its fairly sleek design somehow manages to make the Photon feel slimmer than it is when you’ve got it in your hand… and it bests the Evo 4G by a whopping 0.02 inches.

Inside, you’ll find a 1GHz Tegra 2 CPU, and as I said in the intro, the phone comes loaded with 16GB of storage onboard (though it can handle a microSD card up to 32GB as well). The screen is a 4.3-inch, 540 x 960 qHD capacitive display. As with most new Motorola devices, you’ll find Bluetooth 2.1+EDR here, alongside Wi-Fi 802.11b/g/n. Those play nicely with the device’s WiMAX and EV-DO Rev. A cellular radios. In addition to the previously mentioned shooter on the back of the phone (with LED flash), you’ll find a VGA camera up front (for all your Google Talk calls to loved ones). The phone has a 1650mAh battery — and you’ll need every drop of that power.

In all, the device is certainly up to par with its contemporaries, though not breaking any new ground from a feeds-and-speeds perspective. The design of the phone sets it apart from other devices in the Sprint lineup, though it carries a familiar stoic, shield-like form factor that isn’t completely unique (think the aforementioned Charge and RIM’s BlackBerry 8703e). Still, it’s a handsome, well-made phone that offers more than enough in both looks and guts to justify a second glance. 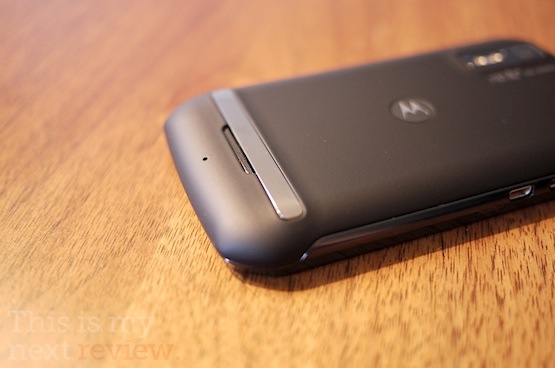 Reception on the device was excellent. While testing the phone around New York City, I had no trouble with call connectivity or sustaining conversations. The Photon 4G has a particularly loud and clear speakerphone which performed excellently while on lengthy conference calls (and extremely boring customer service hold times). Motorola has impressed me in the past with the clarity and volume of its phone audio, and the Photon was no slouch.

On the data side of things, I had mixed results. In Manhattan, I was able to nab astonishingly good upload and download speeds while on the street. At the highest point, I averaged about 12Mbps downstream and 1.5Mbps upstream. In buildings, the data was a bit more spotty, but I was able to grab substantial rates if I didn’t go too deep. In Brooklyn, however, it was another story. While the Photon reported relatively high 4G connectivity (four out of five bars), my download speeds slowed to around 4-5Mbps, while uploads barely cracked 1Mbps.

It’s clear that the issue is not so much the capability of WiMAX, but Sprint’s coverage areas. If you’re in the right zone, you’ll be flying; if not, you could be high and dry.

One other point worth mentioning: the Photon 4G regularly notified me that it had lost its 4G signal, and requested that I manually make a pass to see if I could lock back onto the network, giving me the impression that in many cases, its hold on a WiMAX signal was tenuous at best.

A big selling point (to some) about this phone is that it’s capable of GSM coverage when you head overseas, though I didn’t get a chance to test this functionality out in the short time made available to review the device. 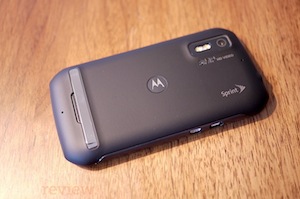 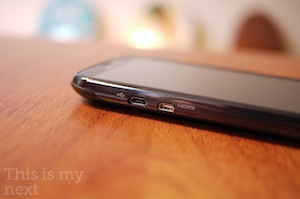 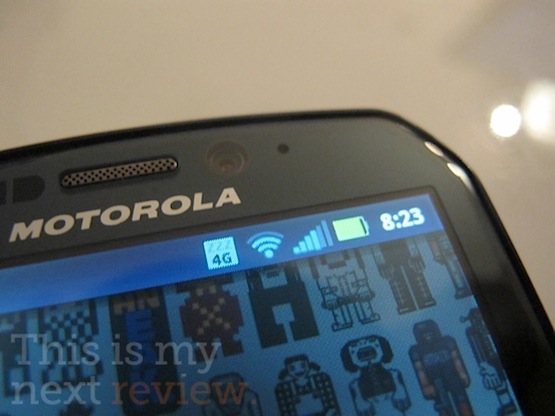 There has been no shortage of controversy when it comes to 4G devices and battery life. Certainly Verizon has had to sustain a multi-sided attack on its recent LTE offerings over the juice-factor, and Sprint is no stranger to a public outcry over phones that deliver killer speeds along with less-than-killer battery performance.

While the Photon 4G isn’t immune to the effects of a serious data pull, it fared relatively well in testing. During a day of moderate use on only the WiMAX and 3G service (some web browsing, a handful of application downloads, a few phone calls, camera snapping, and continuous email and Twitter syncing) the phone managed to take me into the evening with a little battery life left (around 30 percent after 12 hours off the charger). That’s not to say the Photon exhibits extraordinary staying power — with heavier use I saw the battery dip quickly and consistently, particularly with lots of talk time.

There’s no getting around the fact that our battery technology hasn’t caught up with our data and device needs, but it’s also fair to say that Motorola has done an admirable job at trying to balance those warring sides. Just don’t expect to hammer on this thing all day on the cell network without a charger nearby. 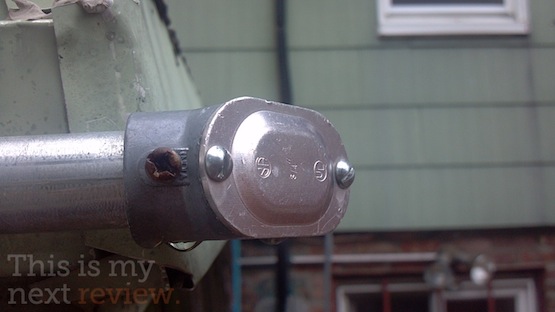 Like other Motorola phones in this class, the camera on the Photon 4G does a fair job of capturing large photos and HD video, but I wouldn’t say its pic-snapping prowess is anything to write home about. In particular, the Photon seems to have a little trouble when it comes to hanging onto focus in even slightly low-light situations (no matter how steady the hand), and colors in photos tend to be washed out. When I did manage to get good light, however, images were sharp. For typical picture-taking, you’ll get solid results — just don’t expect point-and-shoot consistency from the device.

On the video front, the phone fares a bit better. HD captures looked really great on the device’s big screen, and when I output the content to my HDTV, the quality was surprisingly crisp and smooth. 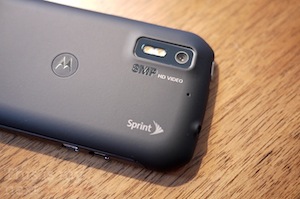 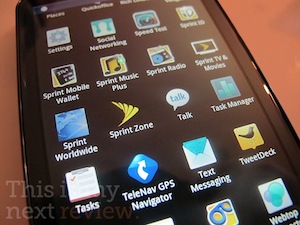 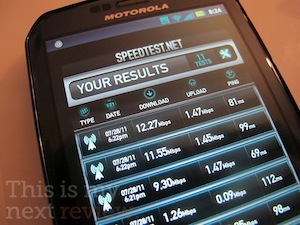 The Photon 4G is sporting the latest Gingerblur mashup that is Android 2.3 mixed with Motorola’s special brand of manufacturer customizations. In all — like the Droid X2 and recent Atrix 4G update — the combo of the faster, sleeker base OS and Motoblur "improvements" is a fairly solid pairing. I would ultimately prefer the device to shake its skin free and go Android native, but there are more offensive pairings on the market.

Motorola actually makes some intelligent choices, like adding predictive dialing to its numeric keypad in the phone app, and has created a set of widgets not completely without value. Still, its homescreen speed and functionality paled in comparison to the efforts of Launcher Pro (a third-party homescreen replacement), and I found myself quickly moving away from the company’s customization efforts. One of the places I found abstractions and annoyances was the Gallery application, which unnecessarily adds layers to the process of viewing photos. What is the point of making Google’s apps harder to use?

Another knock is the inclusion of crapware like the Sprint NASCAR application, Sprint Radio, and Sprint ID. There are more, but I think you get the point.

Besides that relatively minor complaint, general app performance was excellent on the device. Games like Monster Madness (admittedly optimized for the Tegra 2 CPU) ran with little-to-no lag, while application switching and general busy-work felt snappy.

Our review of Motorola Photon 4G 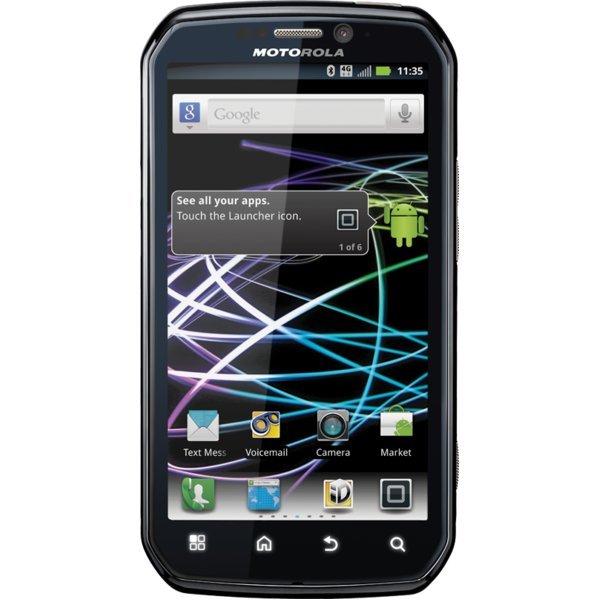 It’s a fine contender on a fine carrier, but it doesn't move the needle

The Photon 4G isn’t exactly a groundbreaking device. If you’re an Android user (and especially if you’re a Mororola device owner), you won’t be surprised by anything here. The 4G connectivity is solid when you’ve got it, the hardware is completely capable, and the software serves its purpose relatively efficiently. If you’re already a Sprint customer and are poised to upgrade, you could do a lot worse than this device. On the other hand, there doesn’t seem to be anything so compelling about this phone or its features that I envision it leading users away from other carriers. It’s a fine, recognizable contender on a fine, recognizable carrier — but I don’t know if it has the flair to move bodies. The Photon 4G is a great device, but if Sprint and Motorola desire to spike the needle with consumers, they’ll have to try a little harder than this.