Hulu Plus for Xbox 360 review

A bold jump to the living room — but how does it fare against Netflix's offerings or even the "king of the hill" cable TV box?

Share All sharing options for: Hulu Plus for Xbox 360 review

As with most products, services, and other tech industry deliverables, there are two distinct elements. The first is the dream of the product — the Big Picture or the pitch, if you will. This is its raison d'etre, the solution to problem you may not have realized you had, some way to better enrich each and every one of our lives. Hulu Plus for Xbox 360, which launched today, is far from perfect — and far from being the first Hulu implementation outside the browser — but in joining Netflix, ESPN3, and of course a massive gaming library, this one set-top box has become the portal for almost everything I want on my TV. But then there's the other element of a product — the reality, the presentation. And it's in the execution that the app slightly stumbles.

As it does on other mediums, watching any Hulu content on a non-PC device requires a Hulu Plus account, available for a $7.99 flat monthly rate. And because this is Xbox 360, internet service (including multiplayer and Netflix) require an Xbox Live Gold membership for an additional $60 a year. By numbers alone, that's arguably a steep increase in the cost of service — about $96 vs. $156 annually — but frankly I know very few people who don't have a Gold membership, so it's a moot premium.

The UI is what you'd expect from an Xbox 360 app. Panels laid horizontal, with a vertical list of categories resting just above that, including popular movies and TV episodes, queue, search, organize by channel, by genre, etc. Diving deeper, each TV show provides a link to the latest episode, a breakdown by season, a collection of clips, and links to related shows. Video streams in HD when available with the same controls as you'd get in Netflix and other Xbox 360 video players. Kinect integration is there, the same as it ever was with other apps.

There's a weird transition when clicking on various panels, wherein the highlighted square sinks back into the queue when you click. There's an awkward pause right after where you think the app might've mistook your action for moving right one panel and, in the process, frozen. The list of clips is obnoxiously long for some shows, and there's no search function specific to the snippets — just shows and movies. As best as I can tell, there's no option for closed captioning on any videos. And unlike with the PlayStation 3, there's no multitasking through the menu while the video plays in the corner. It may sound like I'm going through the weeds with all these minor nuisances, but they all add up to an experience that feels ultimately lacking. 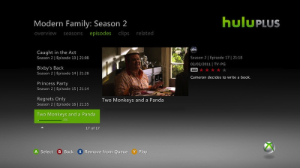 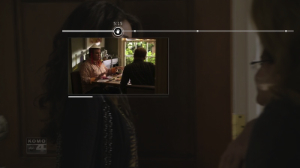 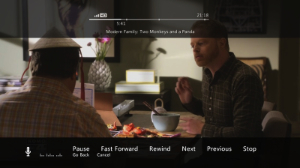 What matters the most, though, is selection, and here Hulu Plus still suffers from a device disparity — it's both better and worse than the browser-based selection. Better, in comparison to the free version Hulu with the sheer amount of older content available. Worse, in that some shows have little or no content available on the Xbox 360, even when the web portal has it all.

To explain by example, on Hulu Plus for Xbox 360 (this applies to any of its compatible TV or mobile devicces) I can watch any episode of 30 Rock from the series premiere onward, but I can't watch even a single clip of Community. (I can, however, watch the previous two episodes for free on my laptop.) Obviously, it's a rights limitation rather than a technical one — and one we're Hulu is working behind the scenes to remedy — but it's this inconsistency that makes it hard to really embrace the premium service. Thankfully, the Criterion Collection looks to have made the transition to devices unscathed.

Hulu Plus on the Xbox 360 is just another step towards untethering TV as a linear, ephemeral medium.

This week, Netflix reported it had virtually tied Comcast, the largest US cable service provider, in stateside subscribers. Now, these aren't mutually exclusive services by any means, but it's clear that more device-agnostic, internet-based video on demand is fast becoming the future of video delivery. Look what we can get now that wasn't available even just six years ago: Netflix, Hulu, Amazon Video on Demand, iTunes video, ESPN3, and a smorgasbord of smaller video portals.

In some ways, it's the realization of à la carte television, picking and paying for the channels you want. Cable TV isn't going anywhere (not anytime soon, at least), but I think we're reaching the turning point where complementary video portals are quickly encroaching on cable's territory at a very rapid pace. Hulu Plus on the Xbox 360 is just another step towards untethering TV as a linear, ephemeral medium. It's a transition that arguably started with VCRs and recordable VHS cassettes and hit a notable milestone with the rise of TiVo and DVRs. Are we there yet? Not even close — but in making Microsoft's game console my go-to-device for all entertainment, I'm another step closer to throwing away my cable box altogether.