Can the first Twitter app for Android 3.0 tablets compete with the Android phone apps or the official Twitter iPad app?

In the software section of my Acer Iconia Tab A500 review I bemoaned the fact that there were no Honeycomb-optimized Twitter apps yet, but I was quickly corrected by some very wise commenters. It turns out TweetComb was released just last week by Chris Stewart, the same independent developer that created Newsr. (Maybe if it was easier to find Honeycomb apps in the Market I would have known, but that’s an editorial unto itself.) Naturally, I downloaded the $2.99 app as soon as I was informed of the news and have been using it for the last two days on both the Xoom and Iconia A500. So have all my 140-character dreams come true? Is there now an Android 3.0 Twitter app that can compete with the loads of options I have on my iPad 2? Sadly, the answer is not really — hit the break to find out what I mean. 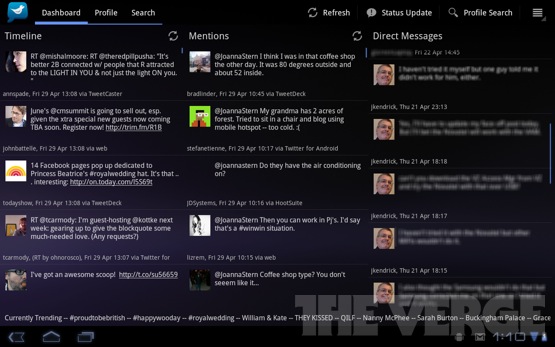 If you’ve ever used the desktop or Chrome version of TweetDeck, TweetComb will look insanely familiar to you. The main Dashboard is split into three columns — one for your timeline or feed, one for your mentions, and one for direct messages. It’s very basic, but that’s not a bad thing – it absolutely beats using Twitter’s official Android app, which is blanketed in white space on a tablet since it was designed for smaller-screened devices. However, the first indication that this app is a work in progress pops up along the bottom of that Dashboard pane — there’s a horizontal list of trending topics that you can’t actually select at the moment. (Believe me, I tried poking at the screen for a good minute.) In addition to the Dashboard, you can select the Profile tab to easily view your profile / followers and the Search to customize three columns of search terms. Overall, the entire app has been very responsive on my Xoom and scrolling is very smooth. It is also very stable — I did encounter one crash, but I’m inclined to blame the tablet for that since I have had a few issues with other apps.

Update: The trending topics are now hyperlinked. Selecting a hashtag launches a column with the feed. 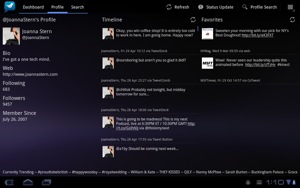 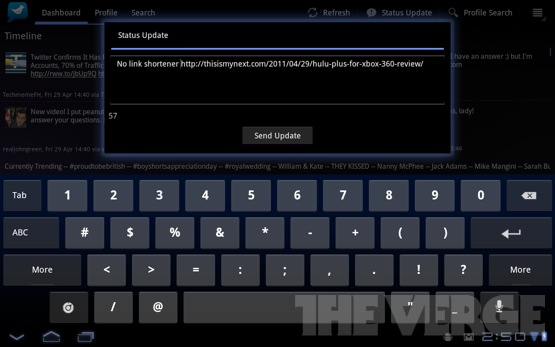 Yes, the interface itself is simple, but when it actually comes to interacting with tweets things get increasingly complicated. In order to retweet or respond to someone you have to long-press the specific tweet to get a list of options. It’s just not that intuitive or convenient. In addition, when you select links or images within tweets, you are taken out of the app into the browser. Perhaps, I’ve just become quite spoiled by the official Twitter app for the iPad or by Tweetdeck for Android, but having to go out to the browser to look at an image just feels like a waste of time at this point. Other small things are missing as well — there’s no way to specify alerts for new mentions or direct messages, there are no background notification options, or any sort of widgets available. There’s also no portrait mode support.

Update: You no longer have to long press a tweet — there are now small buttons for selecting the list of options. In addition, you can now view links and images in the app.

Actually crafting a tweet is done by selecting the "Update Status" button in the upper right corner. I had no problem composing my typical 140-character updates, but I very quickly noticed the lack of an upload photo button and a built-in link shortener. Yes, it’s a huge bummer, there’s no way to insert a picture nor cut down the size of a URL, although I’m told both are coming very soon.

It should be fairly obvious why TweetComb isn’t the Honeycomb Twitter app of my dreams… or at least not yet. There are loads of missing features at the moment, and while $2.99 is just the price of a small iced coffee, it’s a good amount to pay for a very beta app, especially when I can see the usual Twitter app makers — Plume, TweetDeck, Twidroyd, etc. — joining the race soon with free (albeit ad-supported) options. (I specifically reached out to Twitter on its Honeycomb app but unfortunately it couldn’t comment.) However, despite its missing features and sporadic lack of polish, TweetComb is certainty a step in the right direction for Android 3.0 apps. The developer also promises significant updates in the next few weeks since it really is a work in progress, and he is known to work very quickly on adding features. But, until the basics are there, I’m sure you can understand why I will be sticking to the Android phone apps on the Xoom and Twitter’s official app on my iPad.Editor’s note: I will keep an eye on this app and update this review / score as it updates.