iriver's newest reader has a high resolution display, but is it enough to make up for a lack of features?

iriver’s follow-up ereader to the Story (and its first US market offering) — the Story HD — features a newly redesigned piece of hardware, but you might not know that it's a 2011 product from a glance. The design is downright retro in some ways, featuring little goldish brown pill-shaped keys, a metal rocker navigation button, and a matching goldish brown rubberized back.

The software is incredibly simple and stark — this is one ereader you won’t be surfing the web on. Still, the market for readers is ever-expanding and there is room for all shapes and sizes. Read on for the full review below to see how the iriver Story HD stacks up against the ever-widening field of competition.

The iriver Story HD’s physical presence is a bit startling for 2011. It’s not that the Story HD’s design is totally outdated, but it certainly fails to move the hardware story of ereaders forward in any significant way. The front of the device boasts a 6-inch (768 x 1024 resolution) E Ink screen, a full, tobacco-colored keyboard with 38 tiny capsule-like keys, and one metal hardware rocker for navigational use, plus dedicated home, back, enter and option keys. The back of the device is a golden brown plastic, with the power button on the bottom left hand corner and the SD slot right above it. It’s a simple affair, and a light one, too — the entire package weighs in at 7.3 oz — less than both the latest Nook (7.48 oz) and the current generation Kindle (8.5 oz). The keyboard looks like it won’t be the greatest for typing, but I found it to be surprisingly comfortable and accurate. The branded home, back, enter, and option buttons also work just fine, are easy to find just by feel after a few minutes of use, and all of them have a nice tactile response. The device can hold up to 32GB with an SD card (with 2GB on board). Battery life is excellent as is the case with most E ink readers, and I haven’t even made a dent in it in almost a week of decently solid use (several hours a day — I like to read a lot), so I’ll take iriver on its word when it says the Story HD gets up to six weeks on standby.

Reading on the device is quite enjoyable

The same can’t be said for the metal, four-way rocker in the center of the device that is used mainly for menu navigation and page turns. The button itself is placed just fine, but it feels a bit mushy and occasionally misses a press here or there, causing some momentary confusion in the device’s ability to update on cue. There’s one other major gripe from the hardware perspective, and it’s not a completely minor one. The review unit arrived boxed with two very nice, branded iriver covers, and the device fits nicely into both. However, in order to wake the device from its sleep mode, you have to slide the power button on the back of it, meaning you have to physically remove the reader from the case to do so — not ideal from a design or use perspective, and in practice, it’s pretty annoying. The best part of this device is, of course, the very high resolution of its screen, and reading on the device is quite enjoyable. The text is noticeably crisper than the Nook or Kindle, which both have a lower resolution. Page refresh is on par with the recent Kindle (and only slightly slower than the Wi-Fi Nook), and that boosted number of pixels makes for a crisp reading experience. Other than that, though the hardware is very basic and certainly not high end by any means, the overall design of the reader is perfectly functional, intuitive, and has a nice feel in the hand. No, it’s not reinventing the wheel of ereader design, but the thin and light slab with screen and keyboard seems to be the right wheel to begin with, so we’re just fine with that. The general build quality of it is fairly high, though pushing on the corners of the device a bit does produce some creaking.

The software component of the Story HD boils down to the reader, period. There is no web browser, games, or special features. You can’t make notes, or highlight favorite passages (though there is a bookmark feature). There is support for PDFs, a built-in edition of the Collins dictionary, which is nice, and iriver has partnered up with Google to bring Google’s ebookstore to the device (more on that in a moment). Ultimately, however I don’t do a lot of web browsing on ereaders, and I’d guess that most people purchasing an e-ink-based reader feel the same. Leaving that aside, however, the software is incredibly sparse, though intuitive in use. The speed of the device is also on par with current competitors, and though the Wi-Fi seems a bit slow to connect, we found it to be totally stable once actually connected.

The Wi-Fi seems a bit slow to connect

Google’s ebookstore interface is similiarly bare bones with a very basic search function, but there are 2 million free books to load up on your device, plus plenty of others you can buy. That’s supposed to be the big draw here, and, in some ways it is. The truth is, however, that Google’s offerings are not in any way able to compete with those of Amazon or Barnes and Noble, and because of this, the Story HD is in some ways at a disadvantage to those companies’ devices. Google’s free offerings, many of which have been OCR scanned because they are free of copyright, very often leave something to be desired, and their paid selection seems to be a good deal smaller than other stores’ offerings.

As it is, it's not a bad product by any means, but better ones can be had at this price

Still, given the very simple interface of the Story HD and the sometimes disappointing Google ebookstore (no Gilead?!), the Story HD presents a fairly satisfactory overall experience, and while it's not able to compete point-for-point with the Nook or Kindle, it also doesn’t completely lose against those competitors, either. In fact, as a utilitarian product, it doesn’t fare too badly, and the performance of the device is solid, with no sluggishness or delays. The real sticking point, I think, is in its price point. At $139, the Story HD is the exact same price as the Wi-Fi-only Nook and Kindle, both products which outshine iriver’s offering in several key points. If this were a $99 product, it would be much easier to overlook some of the very minor drawbacks to this device. As it is, it’s not a bad product by any means, but better ones can be had at this price.

Our review of iriver Story HD 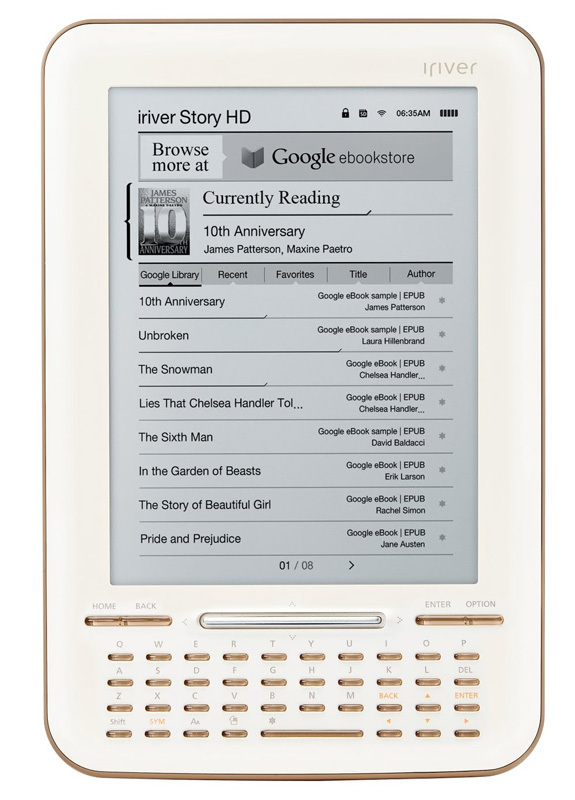