Barnes & Noble is going all-in with a touchscreen UI -- can it pull it off?

The new Nook from Barnes & Noble has this funny little trick: I keep on reading on it. In fact, despite my best efforts otherwise, I’m often reading the very book I planned on reading, or the book that I was reading moments before I tried to escape into some OS Wonderland that simply doesn’t exist here. Sometimes I wonder what else is going on in the world — but I’d have to set down the Nook and pick up another device to find out, so I just read the book instead. It’s kind of like… reading a book.

For Barnes & Noble, the new Nook is a perfect compromise between the unintuitive dual-screen original Nook and the super ambitious Nook Color — which is really more like a tablet computer than a reader. E Ink keeps the device cheap, both on price and on battery life ($139 / two months), and everybody loves a touchscreen. The question is: in a bid for simplicity, has Barnes & Noble kept the best parts around, or thrown out the baby with the complicated bath water? Let’s dive in and find out.

In many ways, the Nook is almost a post-digital device. When you open the box you just pull out the Nook and start dealing with content - no need to worry about the USB cord or charger just yet, tucked away in a second compartment. After the Nook is powered on the first time you might never need to power cycle it again. WiFi works automatically at any Starbucks or Barnes & Noble. There aren't any "web addresses" to type in or "apps" to install. I've never forced anything to quit, and I'm not sure how I would anyway.

Technically the new Nook is a touchscreen E Ink ebook reader. It communicates with the Barnes & Noble ecosystem, and also works as a simple mass storage device for sideloading ePub or Adobe Digital Edition titles you might have lying around. Even more technically, the device is running Google's Android operating system - though there isn't a single hint to that fact in the actual UI or operation of the reader, but more on that later.

The actual object is made out of a soft touch plastic, both front and back, with a large indentation in the rear to give you something to hold onto. At its thickest the Nook is certainly thicker than the Kindle 3 (0.47-inches vs 0.34-inches), but both devices are super light (the Nook wins at 7.5-ounces, the Kindle 3 is a hefty 8.5), and I actually greatly prefer holding the Nook. The thickness means less of a "pinch" is required to hold onto it, it just rests in the hand. You can turn pages by swiping anywhere on the screen, tapping on the edge of the screen, or pushing one of the four rubber ridges on the sides of the device - which can be customized to your preference. Between the shape and all this flexibility, arm and hand fatigue is basically a non-issue, which should be great news for anyone used to reading on something like the iPad or even the Nook Color. 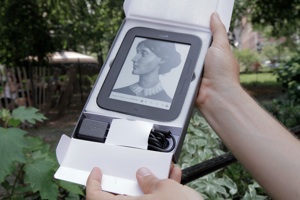 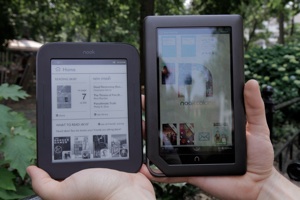 The 800 x 600 E Ink screen is sunken below the bezel a couple millimeters, no doubt to make room for the infrared touchscreen technology. It's actually the same tech that's used by last year's Sony PRS-650 (and the just-announced Kobo Touch), and since it doesn't involve an additional layer of anything over top of the screen (the IR is embedded in the sides) it doesn't have any impact on readability, unlike older generations of touchscreen ereaders. Happily, I found the tech to be perfectly responsive, including some pretty snappy QWERTY keyboard operation.

As for the actual E Ink, it's the same 6-inch "Pearl" screen used on the Kindle 3, and the contrast and responsiveness is just as good. B&N has one trick up its sleeve, however. When turning pages on a book, the Nook does a semi-refresh that swaps out the text without doing a full-on "flash" of the screen. The downside is a minor amount of ghosting - which you can't really see unless you're looking for it - but the upside is that page turns are much less jarring. Every 6th page turn still flashes to black to kill the ghosts, but if you're really looking for something analog and trippy you can start turning pages rapidly - it kind of looks like a fast forwarding VCR on a snowy CRT. Basically, the days of ebook readers taking their own sweet time to turn the page is over. And won't be missed. 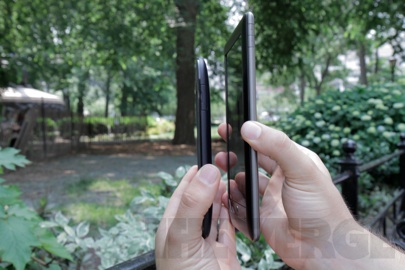 While this little hack is great, it's important to keep in mind that this isn't a generational leap. There are still some major problems with E Ink. Compared to a paperbook (even a yellowing one) the contrast between text and background isn't nearly as strong. Real ink has an advantage of being on top of the page, while E Ink still feels like you're seeing it through a slight filter. It helps to have a direct light when reading E Ink, while real ink can be read comfortably under most ambient light conditions. Finally, real ink and recent phones (like the Atrix and iPhone 4) have the supreme advantage of resolution over E Ink. Text rendered on a 800 x 600 6-inch screen simply looks blurry compared to a pixel dense phone display or a "retro" printed page. Also, more specifically, I feel like the font rendering on the Nook is slightly inferior to that of the Kindle, the result being even more pixelated words than strictly necessary with this technology.

A quick note on battery life: Barnes & Noble rates the device at two months of "average" use, which is about half an hour a day. If you're really serious about running the battery down, it will supposedly take you 150 hours at a pace of one page turn per minute. I haven't had nearly enough time with the device to put a serious dent in the battery life, but even if you're reading 3 or 4 hours a day on average you shouldn't need to charge the thing more often than once every couple of weeks. I doubt it will be a problem until after the apocalypse. 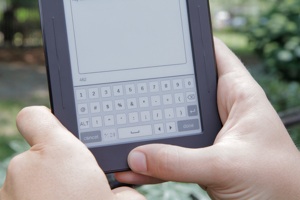 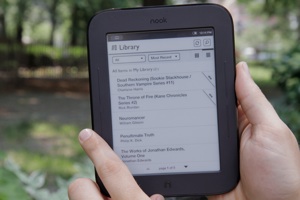 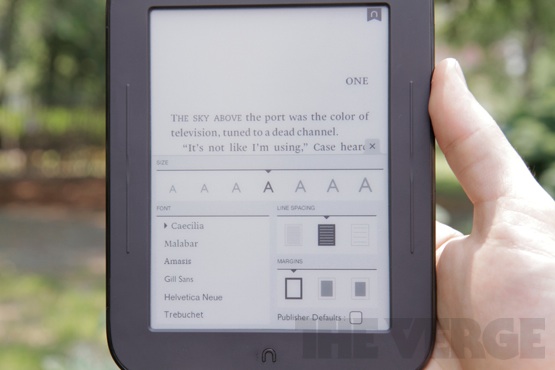 What a difference a E Ink touchscreen makes. UI-wise there's almost no point in comparing the new Nook to the original, or even the Nook Color. After seeing how easy it should be to page through books, jump to pages, change my font size, jump into another book, and preview or purchase a new title, I'm almost embarrassed for Amazon. The Kindle 3′s abstraction of the UI onto hardware buttons and endless menus seems positively last century in comparison. Even typing on the Nook is faster and easier than it is on the Kindle's hardware keyboard.

I'll attempt to explain the touch UI further, but I'll probably just sound stupid. Basically, things are where you expect them to be, and they're really responsive when you tap them. There's only one main hardware button which brings up the "main menu" of home, library, shop, etc., and tapping on the screen while inside a book brings up commands relevant to book reading (go to page, change the text styling, share). That's about it. The fact that any of these things are hard to do on devices like the Kindle or Nook Color really evades me, but when it comes to pure "even a grandma could do it" simplicity, the new Nook is the hands down winner.

Of course, Barnes & Noble doesn’t just achieve ease of use through the touchscreen. The fact that the new Nook is really only trying to do one thing is a big benefit. I wish I had an email client and an RSS reader and a web browser here, (and I look forward to a hacked version of this device running something more like stock Android), but it’s hard to argue with the straightforward results of a device dedicated only to reading.

That’s not to say there aren’t shortcomings in the software. For starters, Barnes & Noble is trying to make reading "social." The functionality to share passages over Twitter or Facebook or email seems straightforward enough, though I had trouble importing my Google contacts, but I’m not buying into the Nook Friends "social network" at all. The bottom third of the home screen is dedicated to recommendations from your friend group, but the trouble is I don’t personally know a single person who uses a Nook product, so I don’t have anybody to hook up with. I can understand B&N’s enthusiasm, but their efforts would be better spent helping me figure out what my real friends are actually reading (through partnering with a service like Goodreads, who has an app for the Nook Color), instead of my theoretical friends who would all be B&N customers in some fantasy land.

My other big problem is with the way the Nook ecosystem handles sync. As small and portable as the Nook is, I won’t always have it with me, so it’s very important to sync well with a mobile app. This is something Amazon just destroys at, with everything always staying synced automagically, but B&N hasn’t quite figured it out. For Nook you have to manually push the sync button from inside the library. You normally don’t even need to go into the library, since your recent titles are all on the home screen, so really you’re going to the library for the express purpose of syncing. And if you forget to sync before you start reading a title, you’re totally out of luck — if you push sync, you’ll just upload your most recent activity in the book. Cue frustration. 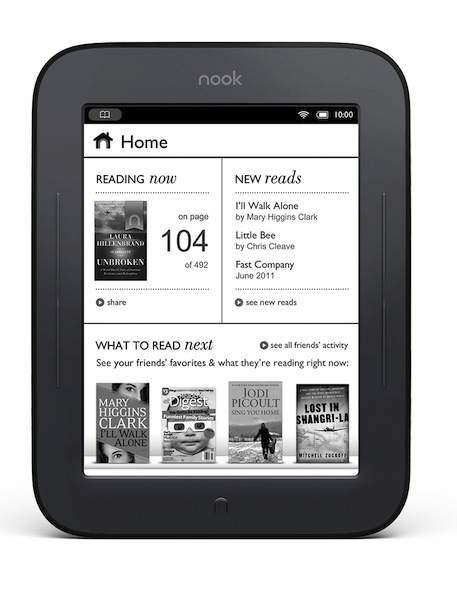 The new Nook enters a highly competitive market, but it’s still a world ripe for new and better ideas — we’re still waiting on the perfect reader

The new Nook enters a highly competitive market, but it’s still a world ripe for new and better ideas — we’re still waiting on the perfect reader. I don’t think the Nook is The One, but it offers up some nice improvements over the standard formula. Perfect simplicity of operation, endless battery life, speedy page turns, and a retail juggernaut for backup. If you’ve already bought into the Kindle ecosystem (as many have), you might be better served just waiting for the inevitable Kindle response, but for someone just getting into the ebooks game, this Nook is a pretty great start.

I personally do most of my reading on my phone. It’s always with me, the screen resolution is killer, and it can run any and all book stores (Kindle, Nook, Kobo, Google, iBooks) without a problem. While the new Nook was a pleasant surprise, and certainly a better experience in sunlight, I don’t think it’s enough to make me stray. Similarly, the E Ink quality really isn’t much of an improvement over reading on an LCD, so I don’t see much reason for iPad or Nook Color owners to feel regret.

What’s funny is that during the course of my testing I ended up picking up one of those old fashioned paper books I had lying around for comparison purposes. It was a paperback copy of Woody Allen’s Side Effects printed in the 80s that I bought off some sidewalk vendor for a dollar or two last summer. Before I knew it I had blazed through an entire short story, and was trying to keep myself from starting another. I told myself, “Remember your review, Paul!” So I pulled out the Nook and tried to buy a digital copy. Sadly, they only had Woody Allen’s more recent anthology, Mere Anarchy. I read part of the available excerpt, but it didn’t really excite me. Another win for nostalgia, I suppose.