Is this the cam you want strapped to your helmet or board?

You know what they say — the best camera is the one you have with you. Having a camera doesn’t always mean you’re able to capture spontaneous moments with ease, though. I cannot count the number of missed photo or video ops due to the relatively convoluted process of pulling my iPhone out of my pocket, sliding to unlock, tapping the camera app and finally getting to hit the record button. (Note: there are plenty of other smartphones that begin recording video faster than the iPhone, but it’s the only one I have on me at all times.)

Enter the Contour Roam. This little camera goes from off to recording video in just two seconds. It’s water resistant and has a wide-angle rotating lens. It’s also mountable and can be used with any standard tripod. But how does Contour’s latest perform as, well, an actual video camera? I’ve been testing out the Roam for a couple of days now — read on for my full review. 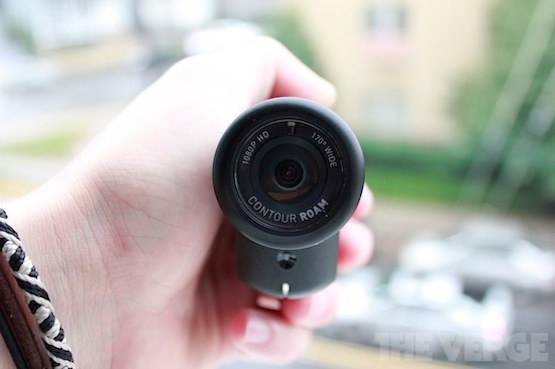 At first glance, you’ll probably notice how small the Roam is — it easily fits inside the pockets of some fairly skinny jeans. On the top of the brushed aluminum body you’ll find a grippy rubberized slider that doubles as the power / record switch. Along the sides are slits for attaching proprietary mounts (two are included), and at the nose is the rotatable, wide angle lens. There’s a single, relatively large button on the back that (when pressed) illuminates the battery and memory card indicators and shines a horizontal laser (which is not nearly strong enough to use in broad daylight) out of the front of the camera to ensure the lens is accurately positioned. The rear of the Roam pops open to reveal a Micro SD slot, Mini USB port, reset (if the camera is stuck in record mode), and format (simply erases the Micro SD card) buttons. 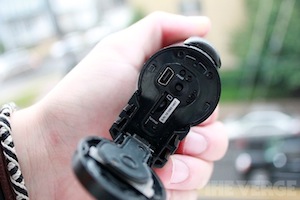 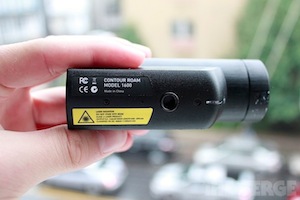 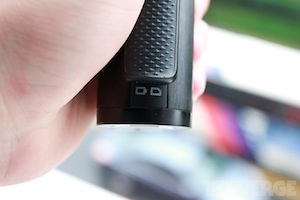 Let me just say this: the Roam is among the simplest cameras I’ve ever played with considering it’s only got two buttons. As I stated earlier, the camera boots and begins recording almost as soon as the top switch is flicked forward — two seconds total — which is quite fast, in comparison to other cams. So if you’re out surfing and a big wave comes your way, there’s a high chance you’ll be able to record the action in time. By default, the camera captures footage in 720p by default (why not 1080p?) and has more recording options that can be adjusted using the software — more on that in a sec.

I recorded some skating footage with my brother and his friends in 720p. As you can see from the video above, the camera performed well indoors and outside in a cloudy setting. Video quality is a tad grainy and washed out, but as with most cameras, the more light you’ve got, the better the video turns out. If you’re into those wide-shot low-angled skate videos, you’ll feel right at home watching footage shot with the Contour Roam. I held the camera in my hands for most of the test footage, but I also attached a mount to the bottom of my skateboard and went for a ride. The mount did a stellar job of holding the Roam in place and made for some awesomely angled footage.

In terms of battery consumption, the Roam’s 1350 mAh lithium-ion pack lasted well beyond a two-hour skate session in which I recorded around 10 or so videos, at around one minute each. Charging the battery is done via USB and it gains 80 percent in an hour and takes about four hours until it’s full. The 4GB Micro SD card allowed for me to record 40 straight minutes of 720p footage before the camera started beeping, indicating that the card was full. 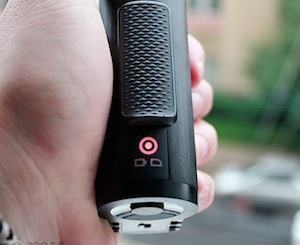 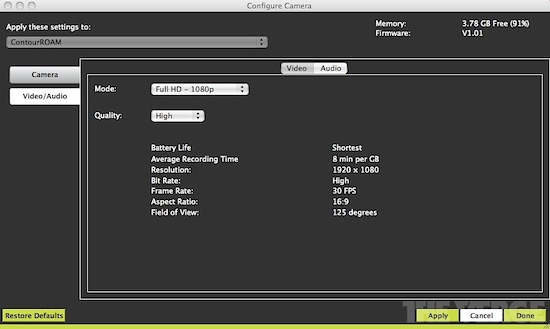 Getting footage off of the camera can be done via USB, using either your computer’s file explorer or the Contour Storyteller app. When the camera is connected, the memory card will appear on your desktop just like when you plug in most other USB cameras, and you’ll be all set to grab whichever files you want.

Upon first opening the Storyteller app, you’ll be prompted to create an account and once you do so, you’ll be able to begin exploring your camera and upload videos to Contour’s site. I’m not usually the type of person that sifts through files via a separate app, but in order to configure your camera settings, the application is a must. Storyteller itself is pretty basic and straightforward — you can view and import files, upload them, and of course, configure recording options as follows: 1080p, 960p or 720p at either 30 or 25 fps each, or switch to a continuous photo mode with stills every 1, 3, 5, 10, 30 or 60 seconds. Oh, and thankfully I was also able to up the sensitivity of the mic because at first, the camera was barely picking up any noise at all. 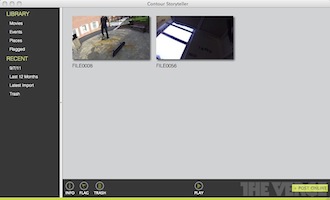 Now, please excuse me while I mount this thing to a helmet and go skydiving

If you’re in the market for a handy, inexpensive camera that’ll record you and your friends partaking in extreme sports (or regular old sports), look no further than the Roam. Contour’s newest entry in the helmet-cam game is quite an attractive deal — $200 will get you a pocket-sized 1080p shooter that’s water resistant and has an idiot-proof recording mechanism. For 70 bucks more, you could pick up a GoPro Naked Hero, which also records at 1080p but requires the waterproof housing should you decide to take it surfing or skimboarding. Now, please excuse me while I mount this thing to a helmet and go skydiving.