Sprint's prodigal flagship device gets refreshed with an added dimension — but is it for the better?

HTC's Evo 4G legacy is something of a rarity in the smartphone industry. Sprint used it as a gateway drug for its WiMAX service — "4G" back when that nomenclature meant something (and was used to great effect in a huge marketing campaign). A behemoth with a 4.3-inch display specs that still stand up to modern releases, it's even managed to best its younger competition with up-to-date Android software (version 2.3.3 as of last of week).
So if you're HTC, how do you top yourself? The company seems to have taken a few pages from Nintendo's book when going from the DS to 3DS: keep a similar design aesthetic, boost the specs, and throw in a glasses-free autostereoscopic 3D display / 3D camera. Does the heir apparent, which launches June 24th on Sprint for $199.99, do its dynasty proud? Read on to find out!

Dimensionally, the Evo 3D is only fractionally different than its predecessor — about five millimeters taller and less than one millimeter thicker. The weight is exactly the same, and the design is more or less in line with family values. The back plate is all matte and textured on about three-fourths of the area. The pair of 5 megapixel cameras and dual LED flash are surrounded by the familiar red ring. (The interior, on the other hand, is a more subdued black than the bright red Evo 4G innards.) Feels durable, although I haven't had the urge to drop it from any height. The kickstand is gone, and as of this writing, I still can't decide if I miss it or not.

The display is a gorgeous 4.3-inch qHD (960 x 540) Super LCD with good viewing angles and max brightness. To the bottom there's a row of backlit capacitive Android buttons, and a 1.3 megapixel front-facing camera above the screen. There's a 3.5mm headphone jack, micro-USB port, physical volume rockers, a dedicated camera button, and an adjacent switch for choosing between 2D and 3D camera mode.

Internally, Evo 3D's got a dual-core 1.2GHz Snapdragon Scorpion MSM8660 with Adreno 220 GPU, 1GB RAM, 4GB ROM (expandable via microSD). Connectivity includes FM Radio, 802.11b/g/n, Bluetooth 3.0, GPS, an assortment of sensors, and of course tri-band CDMA / EVDO Rev. A and WiMAX. In general, the 1730 mAh battery seems to less less than six hours sticking to 4G and less than a full day over (10 hours or so in regular use) without. Call quality was okay — not great, but okay. 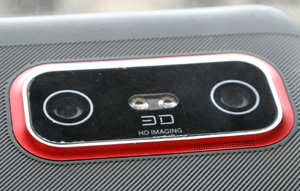 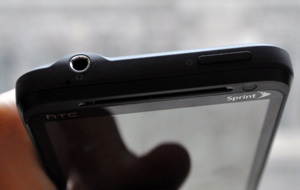 Joanna did a great job highlighting the new Sense with her Flyer review; the Evo 3D's version (3.0) is just about the same, so I'll be a bit more brief. There are six distinct lock screen options, with the most eye-catching one being weather — turn on the screen and you'll get an animation related to the outside temperature (e.g. falling raindrops, flying clouds). The homescreen carousel is perhaps a little too easy to trigger, so while it's pretty awesome to see all your front panes zipping by — it's a very, very smooth animation — it can get annoying when all you really want is to slide over one pane. The browser is really quick, but unlike the Flyer, each page is presented as separate windows (not tabs).

I'll admit, it's been awhile since I've really given Sense a fair try. I'm legitimately surprised to find some of the HTC widgets (e.g. extremely customizable Friend Streams!) actually useful. 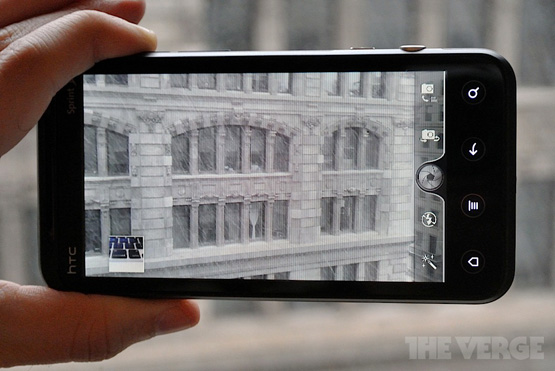 And then there's the flagship feature, a 4.3-inch glasses-free autostereoscopic 3D screen and a 3D camera comprised of two 5 megapixel lenses. To get the big question out of the way, yes, it works... but the viewing angle in which you can properly observe the 3D is pretty small. A bit smaller than the 3DS, I'd say. Outside that window, it's all a painful blur or some nasty-looking composition of two slightly different angles.

HTC bundles a demo of the game Spider-Man 3D and the full Green Hornet film, but by and large you'll probably be digesting your own camera footage. The farther away from the subject you're shooting, the better the image will turn out — and given the nature of the system (two separate lenses), there's a distance at about 12 inches out where anything closer just doesn't work. Shots are captured in 5 megapixels, video in 720p. If you've seen footage captured from a Nintendo 3DS, rest assured, this is much better.

So what about headaches, eye strain, or other health-related maladies? That's all still a risk here. After playing a game for five minutes, looking at my (decidedly two-dimensional) laptop screen feels a bit off (for lack of a better description). A few editors on staff complained of minor headaches after more extensive use.

One last thing to note about 3D: I hope this gets fixed soon, but there seems to be a glitch where the screen tries to "stay" in 3D after you hop out of the camera. Since the home and lock screens aren't in 3D, however, what you end up with is a pretty gross mix of the two. I'd say this happened only one out of ten times, and when it did, you could usually navigate through the menus until it corrected itself. That isn't the case for Spider-Man 3D; although the game rarely produced the same glitch, on at least two occasions the entire phone would lock up. Simply holding the power button didn't help, I had to physically remove the battery and reset. So yeah, really painful, but you probably won't being web-slinging through the game that often.

Is this phone good because of 3D or in spite of it? Well, neither, actually

So let's ignore 3D for a second. The Evo 3D is fast, sleek, up to date, and packs a pretty great qHD display. The standard, two-dimensional camera is pretty good (if not a little grainy) and shoots video in 720p. HTC has made a worthy successor to the Evo 4G.
Is this phone good because of 3D or in spite of it? Well, neither, actually. HTC was smart to make that part of the device not obtrusive in any way — you can whole your two-year contract with the phone in 2D, if you want. Still, when the 3D works, it's impressive, and everyone I've shown it to feels the same way. Headache-inducing? Yes. Perfect? Not one bit. But there's something quite compelling, just a few degrees above novelty of being able to snap a 3D photo of your friends and show them, right then, without any peripheral headwear.