Can Sprint give Google's Gingerbread flagship a new lease on life?

Google’s Utopian vision for mobile — at least on some purely theoretical level — is for equal access to unrestricted Android on unrestricted hardware, regardless of network. The realities of doing business in the American wireless market seem to have distorted that vision somewhere along the way, but every once in a while, they’ve managed to stay true: the Nexus One and Nexus S are both concrete examples of that, unlocked devices that are devoid of manufacturer- or carrier-specific customizations, SIM locks, and superfluous silkscreened logos.

The GSM / CDMA divide, of course, makes it far more complex for Google to deploy a single device that meets everyone’s needs. It’s not a uniquely American problem, but it’s close. That’s where the Nexus S 4G comes into play, bringing a near pitch-perfect translation of the original Nexus S to Sprint that features WiMAX (hence the “4G”) alongside CDMA with EV-DO Rev. A. I’m sure that Google would’ve theoretically liked to have offered a CDMA Nexus S that worked on both Sprint and Verizon, but CDMA (at least, American CDMA) doesn’t really work that way — and the WiMAX support wouldn’t do any carrier other than Sprint any good anyhow.

Considering that the original Nexus S began life as a Galaxy S massaged to meet Google’s self-branded specifications, it’s interesting that they’ve decided to launch another variant nearly half a year later — and that Sprint is putting marketing dollars and store real estate into the affair. It’s not new hardware anymore. But does that matter? Is the Nexus S still awesome in its latest incarnation? Let’s take a quick look.

From the second you see the box, you know (or at least you get the sense) that Sprint hasn't messed with the formula here — not to say Google would've allowed it anyway. The box is identical to the original Nexus S packaging, save for a small "4G" next to the logo on the side and a matching 4G logo on the status bar of the phone displayed atop the lid. Inside, you'll find the same accessories, too: earbuds, a Micro-USB cable, and a small, black USB wall charger. The documentation differs a bit: there are a couple Sprint-specific booklets in here detailing first-time phone setup and activation and another for your agreement. Missing, of course, is the T-Mobile SIM card. 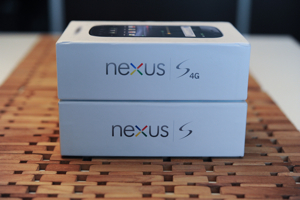 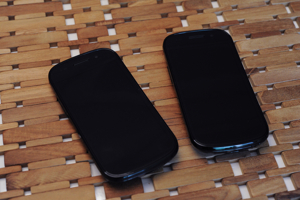 Physically, you might be tempted to say that the Nexus S 4G an exact copy of the Nexus S — and you'd very nearly be right. Not quite, though. Google's official specifications list both phones at 10.88mm thick and 129 grams, but in reality, the 4G is thicker and heavier by truly indistinguishable proportions. Seriously, I spent a good ten minutes picking up one model, then picking up the other, and I was just barely able to psych myself into believing that I could tell a difference in weight... but who knows? Regardless, the average human being will never be able to tell. I documented an ever-so-slight discrepancy in thickness (see above), but you can't detect it in the hand. In other words, for all practical purposes, these are identical devices. 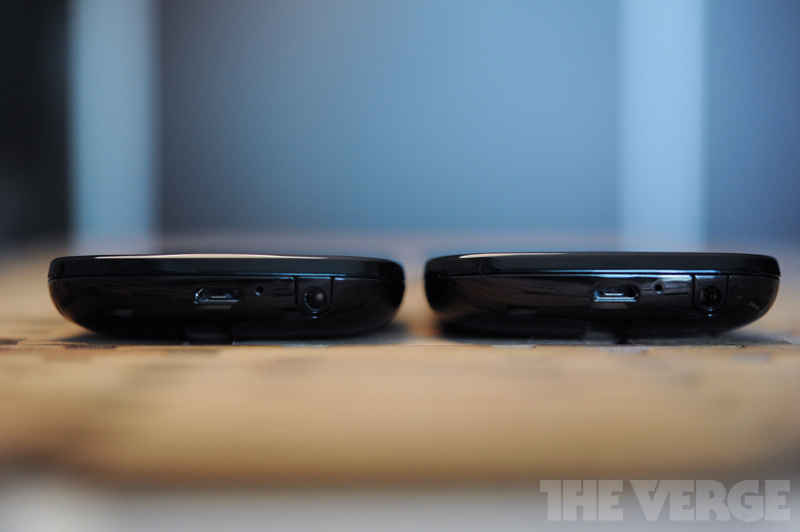 So, what does that mean? If you liked the style and feel of the Nexus S, you'll definitely like the style and feel of the 4G. And if you didn't, you won't. It's that simple. There aren't any pesky "Sprint 4G" logos on this variant scarring the blacked-out face — just the same Google and Samsung logos found on the original. That's it. If anything, we would've hoped that Samsung would've taken this opportunity to replace the notorious high-gloss battery cover with something matte or soft-touch, but no dice — it carries over from the original, too. That's a shame, because we've had a bugger of a time keeping our Nexus S models from scratching almost immediately the first time you throw them in a pocket.

The utter sameness of these phones carries over to software, too — as it should. You get bone-stock Android 2.3.4 across the board, and since these are Nexuses, I'd expect them to get updated rapidly (and in close lockstep) for the foreseeable future. And — surprise, surprise — the benchmarks were within spitting distance of one another. Both consistently posted scores between 1,200 and 1,350 in Quadrant and identical frame rates of 55.7fps in Neocore.

These first-generation Samsung Super AMOLED displays have a tendency to polarize opinions. Some don't like the PenTile subpixel arrangement (which has been eliminated in newer Super AMOLED Plus devices like the Galaxy S II) because it has a tendency to do tint grays and blur text, others complain that certain colors — yellows and oranges in particular — are blown out. I personally don't have a problem with the display, which is theoretically identical between these models, though I felt there was a slight difference in color temperature between the two that you can almost make out in the shot above. It's small enough of a difference, in fact, that it could be attributed to variation between individual display components coming off the line, not a standardized variation between models.

So let's get down to brass tacks: signal strength and battery performance. Using the phone through New York and Chicago, we were surprised by how often we were getting the CDMA roaming symbol (a triangle) in the status bar, at which point the phone is set by default to disconnect you from data — an annoyance, to say the least. Likewise, WiMAX performance seemed inconsistent, reading few or no bars in places where we'd expect to be able to hold a signal (though we were always able to drop to 3G without issue when that happened). There've been reports of miscellaneous radio problems on the 4G since launch — and while we wouldn't consider any of our niggles to be showstoppers, it's something to consider if you live in a fringe area.

Speaking of WiMAX, the 4G handles it the way Sprint's other WiMAX-enabled handsets do, treating it more like WiFi than a cellular signal — and of course, you don't use it for voice, just data. If you like, the phone can be set to notify you when you're in range of a 4G connection. Average and top speeds were higher on the 4G than on the original connected to T-Mobile, though they tended to flip-flop at any given moment — sometimes I'd do a little better on T-Mobile. I never saw the 4G break 1Mbps with WiMAX turned off, but I was averaging about 2Mbps down in New York and 4Mbps down in Chicago with uplinks between about 800kbps and 1.2Mbps. Certainly not the kinds of face-melting speeds you get on Verizon's LTE network, but at least latency was typically under 75ms — quite good.

You definitely pay the price to leave WiMAX on, though. I squeezed just 14:29 out of the battery with the 4G radio left on the entire time, including a little over two and a half hours of heavy internet use and zero calls. The 4G signal was fluctuating between 0 and 2 bars during this test, so I'm assuming I could've done a little better in a strong signal — but that gets back to the fact that the phone's reception seems on the weak side (in fact, I never once saw the WiMAX signal strength indicator at full bars). That's at the very low end of what I'd consider acceptable for a device that you're carrying day-to-day without access to a charger until you get home in the evening. Leaving 4G off, I actually managed to break 24 hours, though with only about an hour of heavy use. My Nexus S on T-Mobile seems to fall somewhere between those two extremes with average use, comfortably making it through a full day unless I spend several hours tethering or abusing it with something like Ustream. Bottom line: I'd use a widget to toggle 4G on only when I needed it.

Look: it’s a Nexus S with WiMAX for Sprint

Look: it’s a Nexus S with WiMAX for Sprint. That’s a surprisingly accurate and complete assessment of this handset in just eight words, and frankly, it really tells you everything you need to know in order to decide whether it’s right for you. Like the original, you can’t really pigeonhole the Nexus S 4G as high-end, midrange, or anything in between — it’s a bit of a sideways shift that places emphasis on compatibility, purity, and futureproofing over raw hardware power and software innovation (if you can call Android skins and associated features “innovation”). Don’t get me wrong, I would’ve liked to feel a little more confident about battery life with WiMAX enabled — and it’s definitely not the best-performing device for either CDMA or WiMAX signal strength in Sprint’s stable — but considering my deep-set feelings for this design, I wouldn’t hesitate to recommend it.