Motorola has confirmed on Twitter that the Droid Bionic, RAZR, and Xoom tablet will be getting updated to Ice Cream Sandwich, but still hasn't set any specific dates. The three devices were already known to be getting updated, but now there is one tweet to confirm them all. Motorola also said ICS updates for more devices would be announced six weeks after Android 4.0 is released — this clarifies previous tweets that were a little ambiguous about whether devices would be updated or just announced at that time.

In related news, the Nexus S will also get an Ice Cream Sandwich update, according to a statement Google gave Engadget. This isn't surprising given that Nexus devices tend to be first in line for Google's latest software releases, but Google also said that "theoretically," any Android 2.3 device should be able to run 4.0. We'll put that one in our hope chest and keep waiting for official announcements. 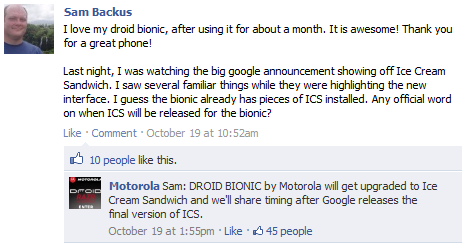