Sprint has released its third quarter, 2011 financial results. As is usually the case with the carrier, it posted a net loss:  $301 million on revenue of $8.15 billion. However, Sprint did manage to add a total of 1.3 million new subscribers for the quarter, though only 304,000 of those were postpaid customers — the rest made up of prepaid and wholesale and affiliate additions.

That's the company's best rate of new customers in five years and it came before the release of the iPhone 4S on Sprint, another positive sign. In the call, Sprint CEO Dan Hesse expressed confidence that the iPhone release would be a very big help to the company's bottom line, "the number one reason customers leave Sprint [...] is: no iPhone." Hesse said that early results on the iPhone 4S implied the company would see record numbers, but that full results would have to wait until the next quarter. Hesse added that he expects iPhone users to make the company at "at least 50% more customer lifetime value" than a typical smartphone customer.

If you're looking for other signs that things could be looking up for the carrier, note that Sprint is staying aggressive with its LTE plans. The company's vice president of network development and engineer, Iyad Tarazi, said in an unrelated conference that Sprint would deploy both LTE-Advanced technology and Voice over LTE (VoLTE) devices in the first half of 2013. We'll obviously have to wait and see if its able to execute on those plans, but the combination of subscriber growth, an ambitious LTE roadmap, and the iPhone 4S is a good sign that Sprint doesn't intend to go quietly into the wireless night.

Update: Curious as to how much Sprint ended up paying for the iPhone 4S? According to Reuters, the carrier committed to at least $15.5 billion over the next four years ‚ and said it might need $7 billion in new financing to help cover the bill. 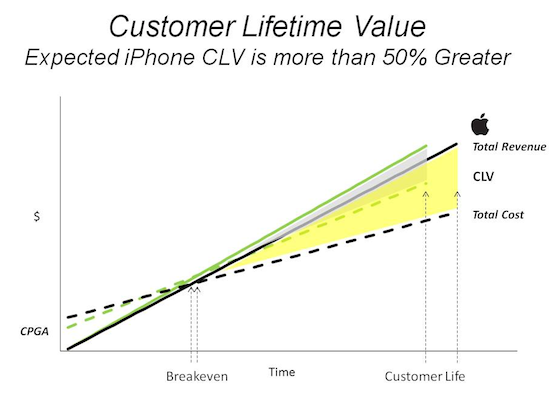