Nokia Lumia 710 headed stateside, according to Nokia US website

Yesterday, Nokia said it'd bring a portfolio of products to the United States in early 2012... but wouldn't promise any particular phones. Tonight, it looks like the Lumia 710 is coming home. As spotted by Techblitz, Nokia's US website now prominently shows the 3.7-inch Windows Phone Mango handset on its product page, and the way it's splashed across the whole website, plus a few discrepancies, make us think it's not a simple error in the company's database. Take a close look at the UK and US versions of Nokia's Lumia 710 product page. We could ignore the fact that there's a map of New York City as opposed to London there, but you'll also see that the word "color" in the product description has been modified from the Queen's English. We've got a picture of that for you right after the break. We suppose it could just be wishful thinking, but it's deliberate either way. You bet your britches we signed up to "be the first to know" when the Lumia 710 will be available on Nokia USA. 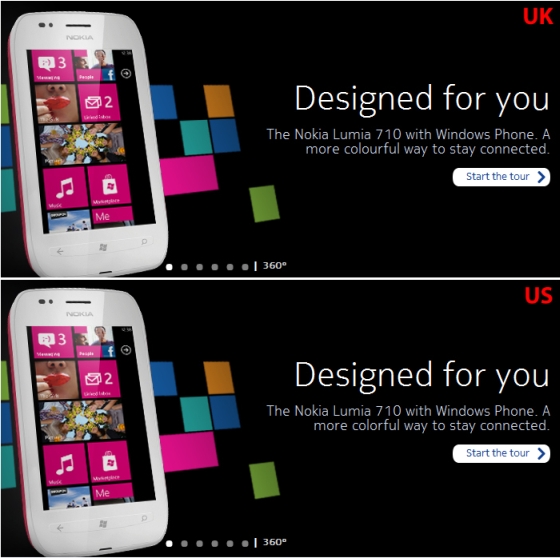