The Iconia Touchbook is more akin to a proof of concept or a prototype: some great ideas skinned over a platform that can’t handle it (Windows 7) and built into hardware not ready for prime time. The Touchbook, as Acer calls it, weights 6.2 pounds and measures about 1.3 inches thick when closed, which is all just about on par with the Dell XPS 15 equipped with a 9-cell battery. Making it even less portable is a 4-cell Lithium Ion that in practice lasted just over two hours per charge. The two 14-inch, 1366 x 768 touchscreen displays can withstand quite the digit-beating thanks to Gorilla Glass, but at the same time doesn’t always seem to register my clicks. Worse still, the pair suffers from a trifecta of annoyances: heavy glare, pronounced fingerprint smudging, and bad vertical viewing angles. These are all particularly noticeable on the bottom screen, which won’t be in an optimal viewing position unless you’ve got the device propped on an incline. The virtual keyboard is still very usable, but reading text just won’t happen.

The top screen should be easy to comprehend—it’s a touchscreen Windows 7 device, meaning one in every three icons will be larger than usual while the rest of the menus will remain tiny as can be. It hearkens back to one of the (many) problems facing Toshiba’s Libretto W105: there’s just too much of Windows 7 showing, too much that still requires a mouse to use.

That’s where the bottom screen comes in—or at least, where it should. Rest your palms (or your ten digits) on the display and up pops a virtual recreation of a standard laptop keyboard and trackpad. I spent a few hours each day trying to type with it and do everyday functions, and though I got better and more accurate, it simply was not comfortable nor did it amount to a speed beyond pecking. You can’t feel where your fingers are going, and of course you can’t always see the back keys with your hands in position. There is no option for resting your fingers on the screen above the keys, so for the most part you’ll be uncomfortably hovering. There is a smartkey correction system that works pretty decent, but by and large you’ll be needing to get it right yourself. 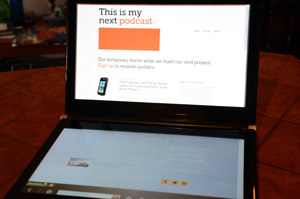 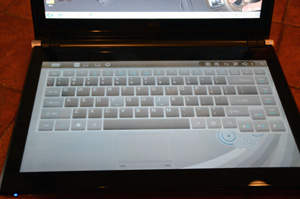 There’s a handwriting app for text input, and that’s actually my favorite part of the Iconia, because it actually works really well. You just write, and when you hit the end of the line it’ll make a new roll of tape, or alternatively you can just throw it in straight in. Big punctuation and web-centric affixes (e.g. "http://" and ".com") are easily added via pop-up menu, and the fixing gestures—deleting, joining, and separating characters—is smooth and intuitive. This is where I wish the laptop came with a stylus and was about smaller / lighter, as we have a pretty interesting use case scenario. 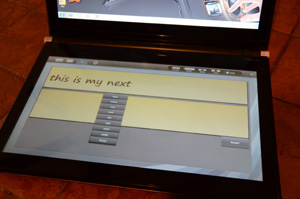 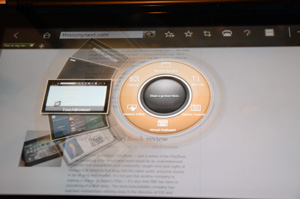 A five-fingers press on the bottom display will bring up the Acer ring. There’s an assortment of apps you can navigate to here, but most are novelty at best. There’s several TouchMedia players (Photo, Video, Music); SocialJogger for Facebook, YouTube, and Flickr that don’t really improve on the browser versions; and MyJournal / Scrapbook, the first of which lets you grab active web clippings and keep an eye on with the page refreshes, and the latter that serves as a way to make still-frame collages. (There’s a questionable design choice that arises here—why have me trace around the desired screen cap and then only use it to define a bounded box?) The big takeaway from the Acer ring apps is the touch browser, which shows that an app designed with touch in mind does work well. It’s quick, the tabs are easily accessible… if there is fault to be found, it’s again the nasty viewing angles. that make dual-screen reading frustrating at best.

A prototype that escaped the lab all too soon

I’m sure I’d be more forgiving of the hardware if its software was more refined and enjoyable, and likewise I wouldn’t mind the software’s shortcomings so much if it were a more compact package. But both? As it stands, what we have is a machine that’s as bulky as a primary workstation, with specs that don’t match its $1,200 price tag and a novelty that ends up being a burden more than it is a benefit. It’s an experiment, and one miles ahead of the aforementioned Libretto W105 (if only for the faster processor), but it’s not one I can recommend anyone shelling out for.