It looks like the Xoom 2 and Xoom 2 Media Edition might be coming to Verizon: a new leaked shot of the carrier's inventory system has appeared, listing both tablets as 4G-enabled. The MZ617 is said to be the 10.1-inch Xoom 2 and is shown with 16GB-64GB of storage, while its smaller companion model, the 8.2-inch Xoom 2 Media Edition, is thought to have the model number MZ609 and only hold 16GB-32GB. We've seen those two product numbers before, and in an earlier Verizon leak they were tied to the code-names "Pasteur" and "Fleming" respectively. We don't know a lot about the internals of the Media Edition except that it weighs under a pound, but the larger model is pegged to have a 1.2GHz dual-core processor, 1GB of RAM, and the ability to record 1080p video. We're still waiting to hear a street date as the one in the screenshot obviously isn't it. 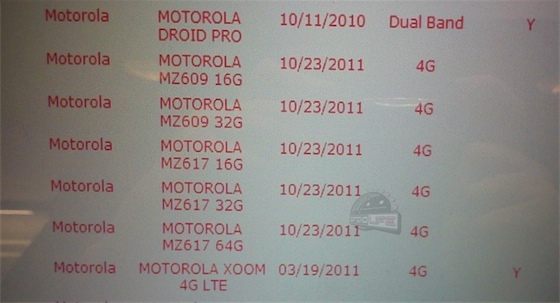