As we learned a few weeks ago at All Things D's Asia D conference, Asus' next version of the Transformer -- the Transformer Prime -- is set to launch on November 9th. And while we were fairly certain it wouldn't launch with Android Ice Cream Sandwich on that date, Asus' German team has now confirmed that on its Facebook page. However, as Chairman Jonney Shih said, it will be getting the upgrade to the fresh Android OS before the end of the year.

But that's just this year. Naturally, Asus has way more in store for next year, and thanks to some PowerPoint slides from its investor conference we now know that it is betting on two "hero" products coming in the first quarter of 2012. Those products aren't named, but since Shih told us at Asia D that the Padfone is scheduled for early 2012, we'd say that's likely one of them. Additionally, that same slide has Asus scheduled to sell an ARM-based Windows 8 tablet or two in the third quarter of 2012. Seems like that will be the Win 8 launch timeframe — check out the slide below and the entire doc at the source link. 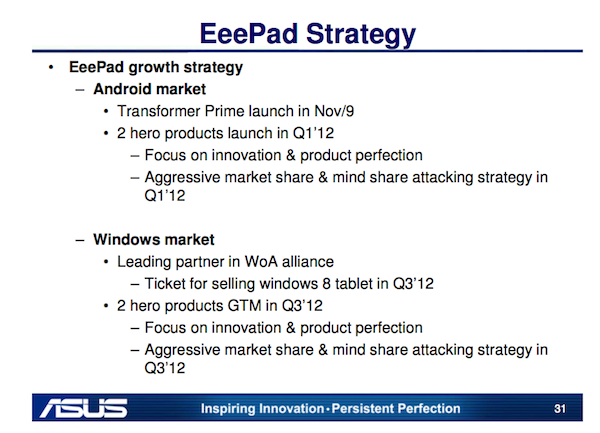