We just got finished with the Apple live event and I had some brief hands-on time with the new iPhone 4S, so I thought I would share my thoughts. This isn't a review or really even a preview, because there wasn't much time to really get a good impression of the phone as a whole. However, I did get a chance to use the new Siri features, as well as get a feel for the performance of the phone — read on below to hear my thoughts.

There's nothing really notable, physically, about the iPhone 4S in comparison to the iPhone 4. Do you have an iPhone 4? Pick it up. Look at it. Turn it over. There, you've just done an iPhone 4S hands-on. Congratulations!

There is a very minor difference in where the antenna bands are placed on the exterior edges of the phone, but other than that there's nothing dramatically changed here. That said, the iPhone 4S still looks and feels as great as the iPhone 4 does. The A5 CPU is clearly carrying its weight here, as there was little hesitation, and I have a sneaking suspicion that this model packs double the RAM of the previous phone.

One other note is that the camera really does stand out here. I only had a very brief encounter with the camera, but it does feel as snappy as Apple claims it does.

The story with the iPhone 4S is obviously all about the software, and while you might be bummed about not seeing a major external hardware revision, you should know that Apple has introduced some serious new features into the language of the iPhone.

Most notable of those features is the device's "personal assistant," otherwise know as Siri, which is a voice-controlled secretary of sorts which translates commands and questions into human language answers and actions. I had a chance to use this feature during our brief demo, and if I wasn't blown away during Scott Forstall's presentation on stage, this definitely changed my mind.

Siri is unique in the fact that you can ask it familiar, natural language questions like "show me movie theaters in the area" and it will return a real, readable answer and a list sorted by proximity. You can also say things like "wake me up at 6AM," and it will set your alarm. But basic tasks like that are only half the story.

Siri works on the idea of logic and context, so when you say you want it to wake you up, you're starting a conversation with the phone which it is actively following. If you want to sleep in a bit, you can say something like "change my alarm time," and it knows what you're talking about — it will prompt you for a new time. 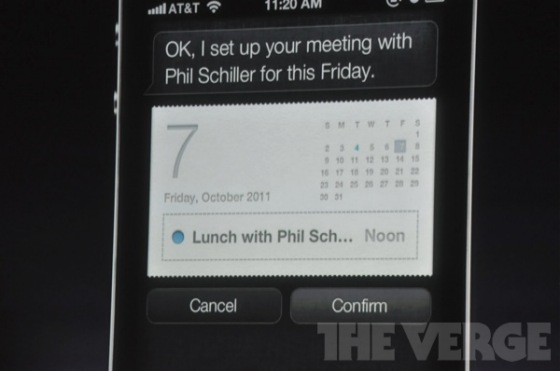 Even more impressive is its ability to work out your calendar events. I asked the phone to schedule a meeting at 3:30 PM, only to be told that I already had a meeting at 4. And would I like to change my other meeting time? Yes Siri, I would.

Taken one by one, this might not sound like much, but in use I found it kind of staggering. I wasn't speaking slowly (as Scott did during the event) or even trying very hard to sound clear. There was background noise. But it really worked, and worked well. Some of my requests were more specific ("Show me theaters that are playing Moneyball") and didn't return the results I wanted. Siri knew I said Moneyball and seemed to know it was a movie (it capitalized the title), but couldn't tell me where it was playing.

The software is still in beta, even at launch, so I expect connections like that will be made sooner or later.

Otherwise, the performance of the phone seemed very snappy compared with the older model, though I wouldn't say the iPhone 4S appears to be obviously faster if you're just darting around the homescreen and opening apps. Siri did seem to speedily pull up answers and forms for text messages and the like — but it wasn't exactly blowing my mind.

Other iOS 5 improvements were obviously on-board, and they do make the iPhone feel significantly more modern. Particularly, the new notifications are a welcome break from the previous, annoying interstitials which iOS offered.

Everything I saw today, however, is the kind of feature which you need to live with to fully appreciate. At least, that was my strong impression. I think that in the forthcoming days and weeks, we'll have an opportunity to explore those features much more deeply. In the meantime, you should check out Paul Miller's thoughts on Siri, and keep your browser tuned to TIMN for information that will be both exciting as well as mentally and spiritually enriching.

iPhone 4S: everything you need to know