Google claims that the number of apps being purchased per device on Honeycomb is four times that of any other version of Android. The bar graph from developer Little Fluffy Toys is a Google slide from the Android Developer Lab in London intended to encourage developers to make Honeycomb apps. The problem is, Google doesn't give any numbers to back up its pretty picture, so the graph is not conclusive proof that Honeycomb is the place to be. It may be true that Gingerbread users purchase fewer apps on average, but it's also a much bigger crowd with potentially many more paying customers — two percent of Android devices run Honeycomb while 40 percent run Gingerbread. 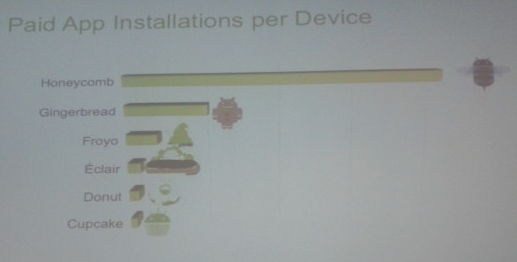 Not to say that Google doesn't have a point, it just needs a different approach to proving it. Let's try a thought experiment with paid apps only. Suppose Honeycomb has 20 devices and 200 apps while Gingerbread has 400 devices and 100,000 apps. If purchases are spread evenly over all the apps, the probability of purchase for a Honeycomb app is 4*20/200 = .4, and Gingerbread is 1*400/100,000 = .004. Of course, Google would have to fill in the real numbers, but if these ratios are close, a Honeycomb app is about 100 times more likely to get purchased than a Gingerbread app. Google doesn't brag about this potential benefit of the dearth of Honeycomb apps for obvious reasons.

Now, the above approach is pretty silly, but that's the point: Google is going to have a difficult time convincing developers to move to Honeycomb. Ice Cream Sandwich is right around the corner, and the Kindle Fire runs Gingerbread, so developers will be tempted to skip straight to the latest version of Android or cater to the millions of people who will snatch up Amazon's tablet before the end of the year.