While the Kindle Fire tablet stole the show at Amazon's recent press event (and the Kindle Touch took whatever scraps of attention were left), something else amazing happened: the company announced and shipped a $79 e-reader, the cheapest Kindle to date and the first to break the $100 barrier. Depending on what you drive and where you live, that's not much more than a tank of gas for a legitimate Kindle with access to library lending, Whispersync via Wi-Fi, and — of course — the full Kindle Store. Of course, "cheap" is often the enemy of "good," so we needed to spend some time reading our favorite technical specifications for wireless standards (seriously) to put the latest model to the test. 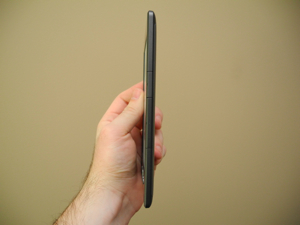 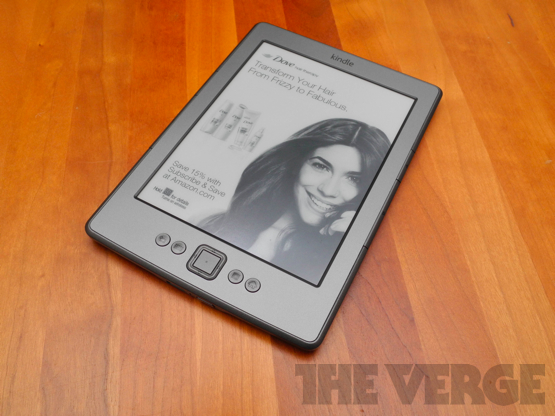 Amazon's packaging for the Kindle seems to get smaller, more innovative, and more environmentally conscious with each new generation of product, and this one's no different. There's no "box" for the Kindle itself, per se — instead, Amazon has engineered the outer shipping box as the Kindle's only container, and it really takes the company's "frustration-free packaging" mantra to the extreme. You just pull a tab on the front, lift the top, and you find your device sitting in an off-white cardboard cradle. A small card in an envelope rests attached to the lid — a little like a library checkout card — pointing out the controls on the device and letting you know that you should plug it into a computer or a USB power adapter using the included cable. An actual wall adapter isn't included — that's one way they were able to get this to retail for $79, I figure — but plugging it into a PC works perfectly well.

In case you don't read the card before you break out the Kindle and start fiddling with it (I certainly didn't), it's much harder to miss the big picogram on the display, imploring you to plug the device in to get it charged. I obliged, at which point I was walked through the setup process — I typed in my Amazon ID, selected my Wi-Fi network, and I was off to the races. A small LED next to the Micro USB port on the bottom edge of the Kindle indicates charge status — amber for charging, green for charged — and it took a little over an hour connected to my iMac for the process to finish.

As hardware goes, the Kindle has become much more of a study in minimalism with each subsequent model. This latest model dispenses of the keyboard altogether — a first for the Kindle line — but keeps dedicated Back, Home, and Menu buttons below the display along with the familiar square d-pad in the center. It also adds a new button to call up an on-screen keyboard for those occasions when you need to perform text input (more on that shortly). Along the bottom edge is the aforementioned Micro USB port and charging light along with a power button. It's actually not that convenient to use; it's nearly flush with the case and I found that I needed to jab it with a fingernail to consistently actuate it on the first try. The back has a metallic look to it, but in reality, it's a high-quality plastic with a nice textured feel. Near the bottom are two metal contacts that I'm guessing will be used for the case with integrated lighting that's coming in November — like the Kindle Keyboard, it'll draw power off the Kindle's internal battery.

That's about it, but there's one other very critical detail of the hardware left to discuss: the page buttons, located along the left and right edges, which you'll obviously be pressing all the time. They're duplicated so that the device is equally at home in a left or right hand, with the large Next button at the bottom and Previous directly above it. You'd think that Amazon would put far more engineering into this singular hardware element than any other (except maybe the display), but they leave a lot to be desired. The buttons are essentially on the edge of the Kindle itself and have virtually no exposure on the front bezel, which leaves you with about an eighth-inch of "pressable" surface. I never had trouble getting a page to turn, I just felt like they were oddly difficult to press considering the fact that you'll be using them hundreds (if not thousands) of times per book. It's this simple design oversight more than anything else that has me looking forward to the Kindle Touch.

The display appears to be the exact same 6-inch E Ink Pearl component used by the Kindle Keyboard, and that's a good thing: page turns generally took about a half second with very few of those distracting full-screen flashes that were required on older units. Contrast is also excellent — I wouldn't call the light color "white," but it's a very light beige that I found to be totally usable in any light.

Editor markup for Kindle (2011) review. This is only visible in the story editor. 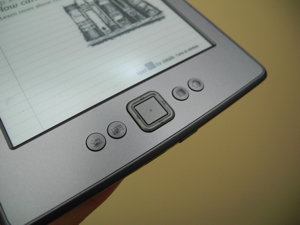 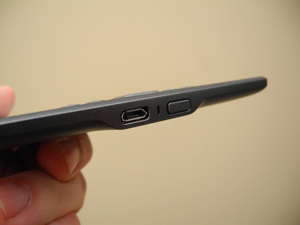 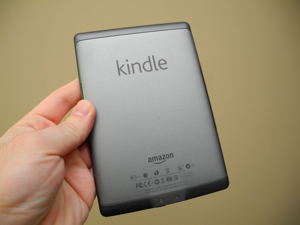 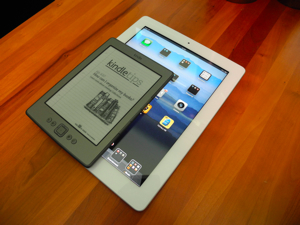 The Kindle's software is more or less exactly like it's been for the past couple generations, so if you're upgrading from an older unit, it'll be a really simple transition — with one important exception. As I'd mentioned before, this is the first Kindle to ship without a keyboard. Obviously, there's a marked benefit to size and weight — and for a true purpose-suited e-reader, there may be no more important attributes than size and weight — but text entry becomes a serious pain. Whenever you're positioned in a text field (searching in the Kindle store, for instance), you can call up an on-screen keyboard using the dedicated Keyboard button at the bottom of the unit, at which point you use your directional pad to key around and select letters one by one. It's an annoying text entry option on any platform (gaming consoles come immediately to mind), but it's even worse on an E Ink display where refresh rate becomes a consideration. To the Kindle's credit, its so-called Pearl display works really well in this regard — transitions are fast — but you still get some shadowing as you're moving around and forming your words. Fortunately, you don't need to do much text entry at all; practically none, actually, as long as you don't run searches, you don't make annotations, and you don't use the social features (tweeting book passages, for instance).

Speaking of screen transitions, this Kindle doesn't seem to set a new benchmark for page-turning speed, but it's just as good as the third-generation Kindle — about half a second or so on average, I'd estimate. It certainly never got in the way of my enjoyment of a book, but if you weren't an E Ink fan before, this model won't suddenly make you a believer.

I tested the version of the Kindle with Special Offers enabled. Amazon does a really tasteful job with these — I consistently found them to look good, they never get in the way, and most importantly, they aren't all simply informational ads. Don't get me wrong, I got my fair share of those (mostly for AT&T), but Amazon was occasionally sending deals — a few dollars off headphones of your choice, for instance — and even helpful tips on using the device. Toward the tail end of my review, I was also getting AmazonLocal deals for Chicago (where I'm located), but this'll naturally depend on whether you're located in a city where AmazonLocal is live. Frankly, I'd want Special Offers turned on even if Amazon wasn't offering a discount on the device — for most users who shop from Amazon even occasionally, it's a beneficial service.

One minor downside to Special Offers, though, is that the Kindle seems to download new ones at its own schedule (whenever it can find a Wi-Fi network, that is) and cycles them on the display, which is a minor battery drain concern. I'd originally assumed that it only changed offers each time you turned the Kindle off, but that's not the case — on several occasions, I made note of what offer was showing when I set it down, and it was showing a different one the next time I picked it up. Fortunately, the impact on battery life seems to be minimal enough so that it'll be a non-issue for most users — I was regularly going a week between charges with normal use, and I once went a two-week stretch without reading only to find that I still had half a charge remaining. 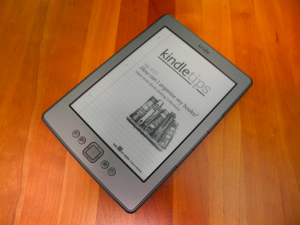 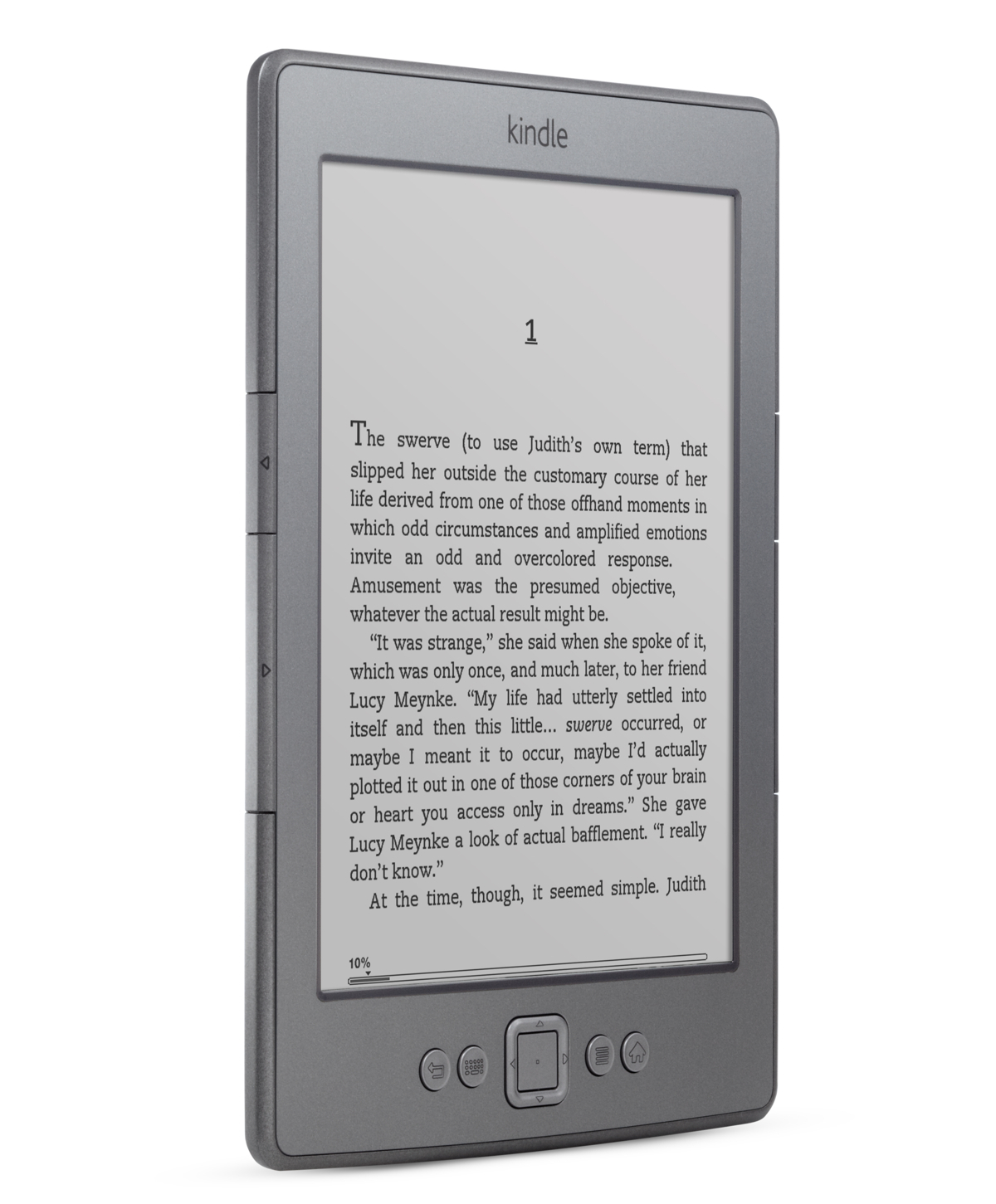 The ultimate goal for any e-reader is to melt away, to become invisible and leave only words on a digital page behind. Thanks to an almost impossibly small, thin, and light shell, Amazon's latest (and cheapest) Kindle nearly pulls it off. I suspect that the Kindle Touch will be the better value with its audio support and simpler interface for just $20 more, but in the meantime, for $79, you really can't go wrong.