It's big and beautiful, but can Samsung's new all-in-one deliver internal hardware and software to match?

The $1,199.99 Samsung Series 7 all-in-one desktop doesn’t have overwhelmingly impressive hardware, but it ticks all the necessary boxes: a 2.70GHz Intel Core i5 processor, 6GB of RAM, a 1TB 7200 RPM hard drive, and Harman Kardon-optimized audio. Though its internals aren’t spectacular, its design is: the Series 7 is sleek and attractive, and the 23-inch display even folds flat to be used like the Microsoft Surface. But enjoying a computer — especially an all-in-one — is about more than just horsepower and looks. It's about software — and Samsung has a lot of work to do to make Windows 7 shine as a touch operating system on the Series 7. Does it work? Read our full review to find out. 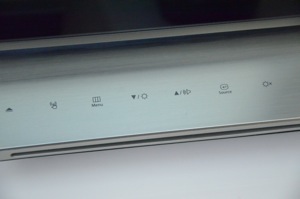 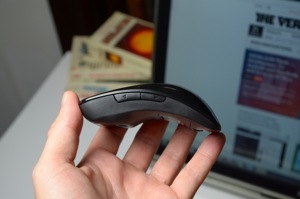 The Series 7 makes a hell of a first impression. It comes out of its rather large box effectively flat, so it looks more like an HDTV than a computer until you fold it open to reveal its base. The base and frame are a brushed silvery aluminum, lending the whole machine a very high-end feel — this is one computer you’ll want prominently displayed. The base is a small rectangle, hidden behind the screen save for one corner jutting out; the power button sits on top of that piece, along with several capacitive buttons for changing inputs, brightness, and the like. The DVD drive sits there, too — it’s not a Blu-ray drive, which keeps the price down but is an unfortunate absence on a on a media-centric machine with a large display. The ports offering is otherwise nicely complete, though it’s clearly designed to be the family computer rather than a media or work powerhouse: four USB 2.0 ports, HDMI input and output, and a Gigabit Ethernet port on the back next to several large vents; headphone and microphone jacks on the left side; and an SD card reader and USB 3.0 port on the right side. The layout makes sense if you use the Series 7 as a traditional computer, with the display propped up at an angle; if you fold the screen down and use it flat, the back ports are blocked by the screen and become hard to access. Fortunately, the screen's ability to lay flat isn't very practical anyway — the computer becomes a little bit off-balance, prone to tipping backward if you press too hard on the top of the screen, and there aren't a lot of hack-free use cases for a flattened screen anyway.

The star of the show, obviously, is the 23-inch LCD, which looks terrific when it’s off but a little underwhelming when turned on. Its 1920 x 1080 resolution is sufficient when watching from afar (after all, TVs much larger have the same resolution), but you’re not usually going to be using the Series 7 from eight feet away. You’ll be using it like a computer, and at short range the pixel density is less than impressive — the display takes on a pixelated, almost glittery sheen when you look at it close-up, which can be a little hard on the eyes. It’s also as glossy as an iPad, and takes on fingerprints like one too; fortunately it’s easy to clean. Overall the display does the job fine, with good viewing angles (though colors tend to over-saturate when you’re off-center); I wouldn’t expect much more in this price range, but don’t toss out your HDTV just yet.

Theoretically, though, you could drop your HDTV for the Series 7, because it supports HDMI input from other devices — an increasingly common all-in-one feature. I connected a computer, a phone, and a couple of other devices to the all-in-one, and it worked just like a TV would. There was no overscan or underscan, but the display did have a tendency to over-saturate blacks to the point where everything appeared a little too dark. It’s also so glossy you’ll be watching your own reflection as much as the screen, unless you’re in a pitch-dark room. It's a usable TV, though, which makes the Series 7 particularly amenable to smaller spaces; it would work well in a dorm room, a bedroom, or anywhere there’s not a lot of space. But once again, the overall display quality means the Series 7 won’t replace your HDTV as the best way to watch movies.

Normally, a hinge wouldn’t get its own paragraph in a review, but the Series 7’s deserves special mention — and not for the right reasons. The hinge is sturdy enough to keep the screen from falling over unintentionally, but for some reason it can’t keep it still. Every time you touch the screen, it wobbles back and forth for a few seconds. It gives even when touched lightly, and then springs back before moving back and forth to get back into position. It’s more pronounced as you get further from the hinge, but fortunately it always returns to the same place — the device doesn’t fall further back over time. It adds up to a frustrating touch experience; you’ll want to touch everything as lightly as possible to keep the display still.

Samsung includes a wireless keyboard and mouse with the package, and both are surprisingly nice. The keyboard feels a little cheap, but works well — the chiclet-style keyboard clacks nicely, and I got used to using it pretty quickly. The curved mouse looks like the Microsoft Arc Mouse (though without any of the Arc Mouse’s cool features), and I mean that in a good way: it’s comfortable and easy to use, and connects through the same tiny USB connector the keyboard uses. The one frustratingly absent peripheral is a remote, though you can find a third-party Windows Media Center remote fairly easily. 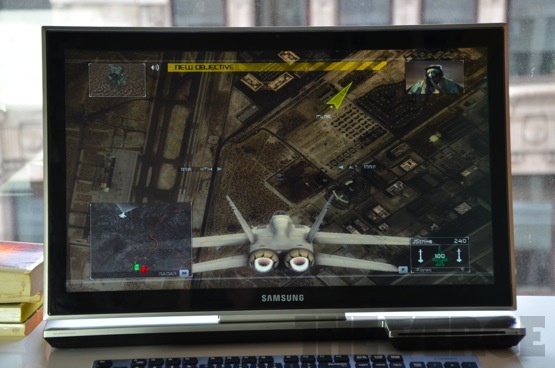 Samsung may have built the Series 7 for your living room and small children rather than your game room and Crysis 2 sessions, but there’s still some solid hardware inside this all-in-one. The high-end version packs a 2.70GHz Intel Core i5-2390T processor and 8GB of RAM, which is more than enough to keep this machine humming. I ran Pandora, eight different HD video tabs, a dozen or so others, and a Plants vs. Zombies game all without any issue; in daily use, I doubt you’d ever see so much as a stutter from the Series 7.

The machine is only held back from true computing greatness by a couple of things. Intel integrated graphics are all you get, which means gaming performance leaves much to be desired; at a relatively low 1024 x 768 resolution, I only got 11 frames per second in Tom Clancy’s H.A.W.X, though numbers were better with DirectX 10 turned off. Left 4 Dead 2 was better, and certainly playable, but its 28fps average output at the same 1024 x 768 resolution still isn't quite at gamer-suitable levels. Plants vs. Zombies works fine, but I wouldn’t try to do much more with the Series 7. The 1TB, 7200RPM hard drive wasn’t great either, with delays in launching applications and booting the machine. It wasn’t a huge slowdown, but an SSD would have made the machine much zippier. It might have helped the fan out too, which makes noticeable noise whenever the Series 7 is working hard — though thanks to its internals that’s not too often.

I got good, but not great, audio from the internal speakers — they’re located at the bottom of the front of the Series 7, and create a pretty solid stereo effect. There’s not a lot of bass response, though, which makes gaming lose some of its oomph. The sound did get really loud, only distorting at volumes that are probably louder than you’d want it to get when you’re using it as a computer. It’s not cinema-quality sound, but it’s absolutely viable for non-discerning TV watchers. 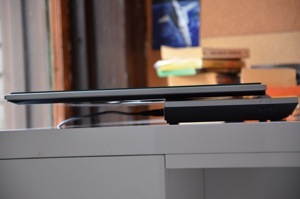 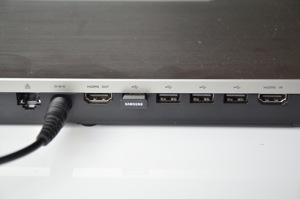 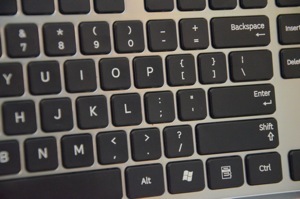 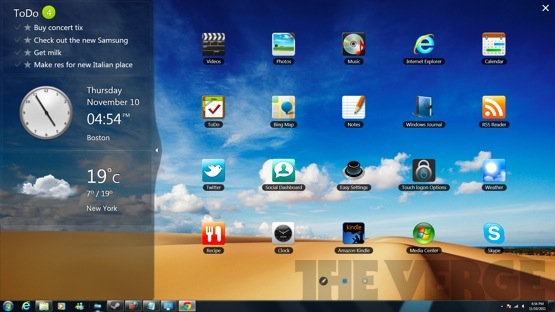 You can touch all 23 inches of the Series 7’s display, but after some time doing so I’m not sure why you’d want to. Samsung included its Touch Launcher application, which launches a touch-friendly dashboard of sorts from the Windows 7 taskbar — it has some finger-friendly apps and access to things like Twitter and Amazon Kindle, all of which theoretically benefit from touch capabilities. It also supports multitouch gestures (only two fingers, though) like pinch-to-zoom, and responds when you hit it with your elbow, which is a nice thing if you’re touching with dirty hands. For simple activities designed for touch, it works — I played air hockey on the screen against a friend, and it worked fine as long as we only used one finger each.

The Touch Launcher is also one of the more useful bits of software on the Series 7. In addition to being a simple launcher for kid- and family-friendly calendar, maps, media, drawing, and Skype apps, it’s got a great application called Easy Settings that lets you change wireless networks, manage battery settings, and more all with only a couple of clicks. Digging through Windows’ control panel to change settings is a huge pain, and the Touch Launcher takes a page from Android’s and iOS’s book to consolidate them all in one place.

The trouble is that Windows 7 generally doesn’t handle touch well, and the Touch Launcher is only skin-deep, so you get both an unresponsive and unpolished interface and an operating system that only lets you do a few things in a touch-friendly way. Launch the browser and you’ll be stuck tapping the tiny "X" to close standard Internet Explorer windows, and good luck navigating the tiny icons in the Start menu. There are also competing actions for very similar gestures, like scrolling and highlighting text, so it’s a crazy mystery what’s going to happen every time you touch the screen. Touch on a 23-inch screen is a neat trick, and Windows 8 make it a useful tool, but until then the Series 7 offers a few moments of touch-based novelty and little else. There’s shockingly little bloatware to speak of, which I always appreciate. There are a few games preinstalled, like Plants vs. Zombies (which I never mind), Polar Golfer (which I’ve never heard of), Insaniquarium Deluxe (ditto), and a number of others. Skype also comes preinstalled, along with a Kindle app, demo versions of a few other apps and the usual cadre of Microsoft apps like Live Messenger. There’s little else, and even those apps are hidden in folders and are relatively unobtrusive. The one exception, and this is nearly always the case on Windows machines, is when you first boot the computer — you’ll be immediately barraged with more pop-ups, registration screens, and "want to update this?" menus than you can shake a stick at. Deal with those, though, and you’ll rarely be assaulted again. 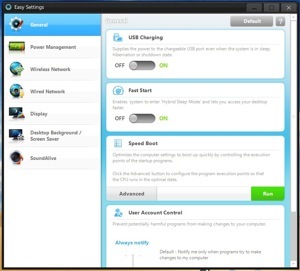 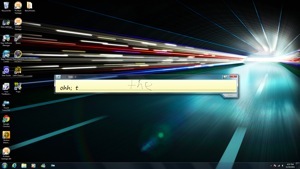 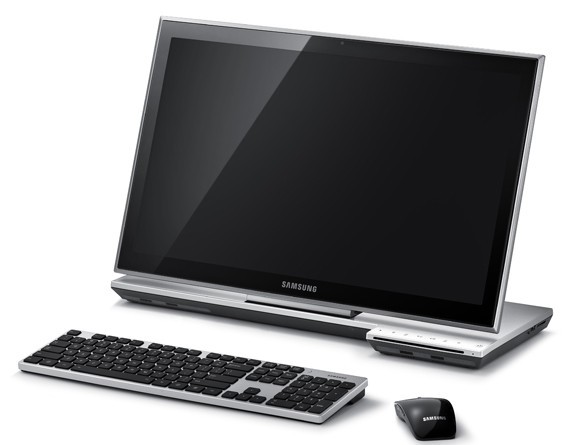 It works well, and is a solid value, but it's not quite what we want it to be

What the Samsung Series 7 does, it does well, but it’s missing a few things that would really make it shine. With a Blu-ray player and a better graphics card inside, this could be a media machine to be reckoned with, but without them it’s not taking full advantage of its big 1080p display and reasonably-powerful internals. The computer’s tendency to wobble is a huge problem (and makes us wary of buying the Series 7, even if it does get a Windows 8 upgrade), but only if you want to make use of its touch capabilities — and I’d bet that after a few minutes of touching the screen, you won’t want to anymore. For the living room or kitchen, it’s a fine, functional computer, but for $1,199.99 we’d expect its key features to be implemented a little better. The MSI Wind AE2420 is a much more powerful machine, though it’s much more expensive, and the HP TouchSmart 610z is also a solid value (even though the 620 has already been announced). And, of course, there’s always the iMac, which remains the standard for all-in-ones, touchscreen or not.

TikTok is feeling emotional damage over the market crash