"Samsung's tablets are like fitted suits. There's bound to be a size that fits everyone perfectly." It's not a line I can take credit for (kudos go to an anonymous friend), but I'd be remiss not to mention it. In the time since Samsung launched its first Android tablet, the 7-inch Galaxy Tab, the company has seemingly had a compulsion to release portable devices of every size imaginable: Galaxy Tabs 10.1, 8.9, and 7.7; Galaxy Players 4.0 and 5.0; the Galaxy S II line of 4.3-, 4.5-, 4.52-, and 4.65-inch (Galaxy Nexus) smartphones; and then somewhere in between all that, the 5.3-inch Galaxy Note.

The Galaxy Tab 7.0 Plus ($399.99 for Wi-Fi model) is a chance to revitalize that original 7-inch market. Slimmer, sleeker, and powered by Android 3.2 Honeycomb, the 7.0 Plus fits right at home with its larger-screened contemporaries. But how will this version fare in what is now a much more competitive space? Read on to find out!

Samsung was very upfront about its last-minute redesign of the Galaxy Tab 10.1 being in direct response to the iPad 2's thinness, but despite its less-than-humble origins, that aesthetic has served the company very well in the last year. The Galaxy Tab 7.0 Plus is literally a smaller version of that design — at this point, it's the original 7-inch Tab that sticks out as a black sheep in the family. At 9.9mm, the 7.0 Plus doesn't quick match the thinness of the Tab 10.1 (8.6mm) or even the iPad 2 (8.8mm), but it's noticeably thinner than the original Tab's now-clunky 11.98mm chassis. The 1.23-ounce weight difference doesn't quite stick out as much, but after catching up on my Instapaper queue for about an hour, any weight reduction at all is welcome.

Despite Samsung getting rid of the capacitive buttons under the screen (Honeycomb doesn't require them), the front of the device is no smaller on the 7.0 Plus — it's actually a tad larger! The front-facing camera is still near the upper-righthand corner (in case you needed another indication this is intended for portrait orientation) and the rear camera and flash are located exactly as before.

On the whole, button and port placement is largely the same as it was, with some minor adjustments. The 3.5mm headphone jack on the top has slid right, closer to the front-facing camera. The microSD slot has jumped to the other side of the device to make room for the IR blaster. The mic has moved from the upper left side of the slate to the bottom right next to the dock connector.

The power button and volume rockers are in fact exactly where they were on the original Galaxy Tab, which is actually somewhat unfortunate — when playing Dungeon Defenders or Wind Up Knight in landscape mode, I had a rather nasty and chronic habit of shutting off the screen when I meant to crank up the volume. Sure, the game would pause, but during intense moments, that stop can really destroy good momentum. Far too many knights died tragically as an indirect result of my reckless button mashing.

Unlike the original's more plastic-y feel, the 7.0 Plus has a brushed aluminum exterior that feels much better to grip — or maybe that's more psychosomatic given that it just looks a lot more refined. I couldn't tell if I had scratched up the back at all, but even if so, it'd fit right in with the design. 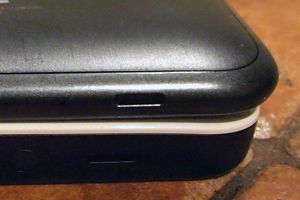 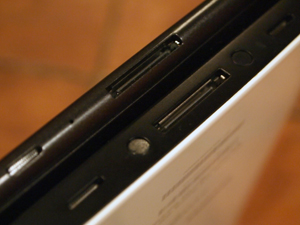 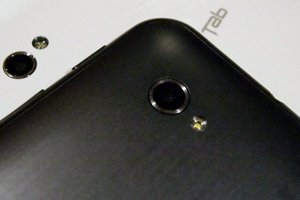 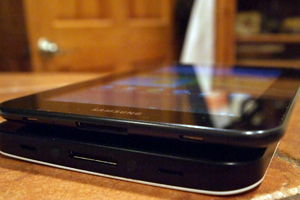 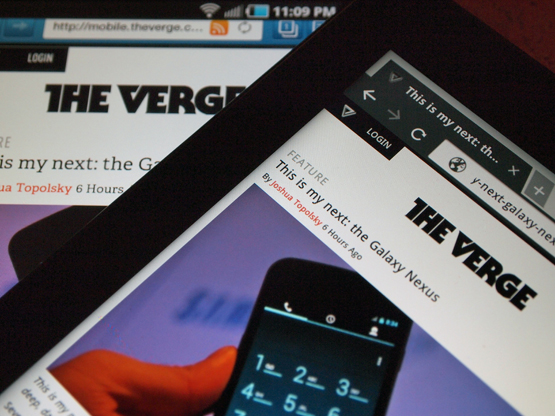 The viewing angles are still pretty good but also equally suffer from nasty glare caused by any light source in a vicinity. Brightness levels and performance are roughly the same, and although the 7.0 Plus does a better job at rendering websites — I could fit an entire extra paragraph of an article — I'm afraid I probably have to chalk that up to better software than screen technology. Worse still, the upcoming Galaxy Tab 7.7 has a 1280 x 800 Super AMOLED panel — not fair! 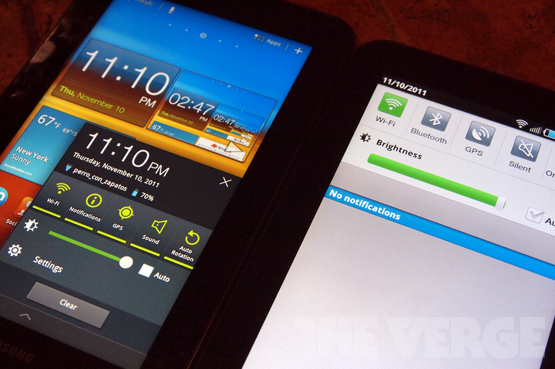 The biggest change is the upgrade from Android 2.3 Gingerbread to 3.2 Honeycomb — and it's indeed a welcome change. The virtual keyboard is tighter, but still on a 7-inch display easy enough to thumb at from the typical portrait orientation. In fact, the top- and bottom-edge navigation was a lot easier to get to on a display this size than the larger Honeycomb tablets.

It should come as no surprise that Samsung loaded TouchWiz right on top of Honeycomb, but like we said when it was added to the Tab 10.1, the modifications are pretty unobtrusive. The social hub and complementary widget is still pretty useless for all but the casual Twitter / Facebook user. The quick panel with expanded settings (pictured above) is actually pretty useful. You probably won't often use the mini apps tray that you can bring up anywhere from the persistent bottom panel, but sometimes the pen memo can be fun to play around with, as it lets you stay in whatever app you're currently using while overlaying a smaller sketchpad window. 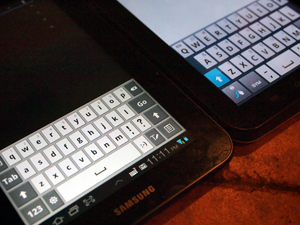 The most unique aspect of the Galaxy Tab 7.0 Plus is the IR blaster and the bundled Peel Smart Remote app, which lets you use the tablet as a universal remote for your home theater system. Previously, the app required an admittedly adorable-looking, fruit-shaped peripheral and an iPhone to control, but here it works entirely via the slate with no other accessories required.

Accepting that my home setup isn't nearly as fun or complex, I visited the Samsung Experience store in New York to get a demo of the app in action. The initial run through can be done in about three minutes or less if you know what you're doing, and the menu setup system is fairly descriptive and helpful throughout — you can see most of the process yourself in the gallery above. Once that's complete, you can organize favorite shows and browse through channels with a fairly clutter-free interface. Peel is something the staff as a whole enjoyed since first getting some hands-on time back in April, and I'm happy to say this is a pretty good implementation of the service. 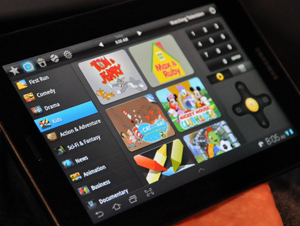 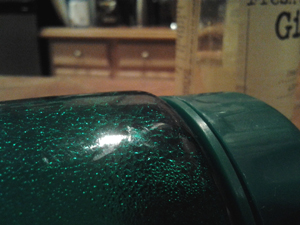 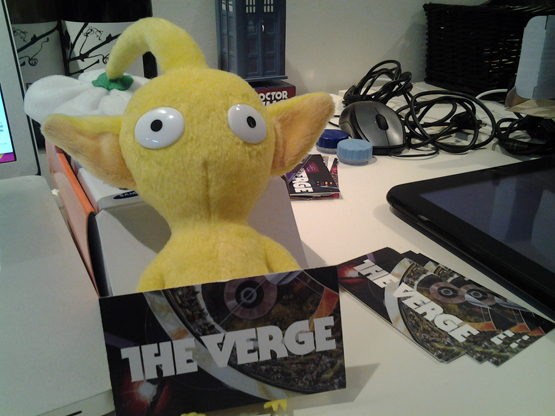 Both the Galaxy Tab 10.1 and original 7-inch Tab took surprisingly decent shots, relatively speaking, and the 7.0 Plus doesn't disappoint. The 3-megapixel rear camera won't replace your point-and-shoot or even a nicer smartphone, but provided you hold steady, you can get some decent stills. Colors can be slightly washed out, but overall came through fine in the right light. The lens was even pretty adept at taking macro shots. We played around with the 720p video both capturing movement and then moving ourselves to check stabilization. With indoor lighting, the video turned out pretty grainy, but as we've all said before... the cameras are nice to have, but you're very likely not buying a 7-inch device in order to hold it up in a crowd and take quick shots.

Samsung thankfully gave the Galaxy Tab 7.0 Plus a 1.2GHz dual-core processor and 1GB of RAM, which means there isn't much we can throw at the device that it can't handle. Video streams smoothly, 3D games like Dungeon Defenders play without so much as a hiccup. Which makes it all the more peculiar that I'd see random stuttering when going through the Honeycomb menu or loading out of an app and back to the front page.

As far as battery life is concerned, I've spent more than a few days now with the device and have only had to charge it once (soon to be twice). In light-to-moderate use — Gmail, casual browsing, light gaming, and listening to the Verge Team playlist on Rdio — the 7.0 Plus seems to be able to last for a good day and a half before needing to be plugged in. As for more heavy use, keeping the screen on at about 65 percent brightness and spending several hours browsing the web (full, non-mobile web sites only) and several hours just putting it down and letting the screen shine, I got about 7.5 hours of use before the low battery notifier chimed in (15 percent life left). Every ten minutes or so of streaming Netflix would consistently knock the device's battery down a full five percent, be it BBC's Luther or SNL's Best of John Belushi. The tablet lasted seven hours and seven minutes on The Verge Battery Test, which loops a series of websites and images at 65 percent brightness

One thing worth noting: the portion of the back that you hold against your left hand (portrait orientation) tends to heat up during 3D games and / or extensive downloads. This is especially true for streaming video like Netflix. Nothing debilitating, but it's not exactly comforting, either.

A worthy but imperfect upgrade

When the Galaxy Tab 7.0 came out just over one year ago, the big question was, "is this an iPad killer?" Obviously it wasn't, but could this Android tablet be a great iPad alternative? What about its more direct Android competition — namely, the Kindle Fire and Nook Tablet / Nook Color. The 7-inch tablet market has become a competitive landscape in its own right, with these very large media brands (e.g. Amazon, Barnes & Noble) releasing their own slates aimed squarely at content consumption.
The 7.0 Plus is better than its predecessor in almost every way — and on par in quality otherwise. In any other case, it really comes down to your needs for a tablet and the 7.0 Plus' $399.99 price tag. Those who just want a media consumption device are probably better off going the Nook or Kindle Fire route for half the price. At just $100 more, the 9.7-inch iPad 2 is still the undisputed champion in this realm. For Android tablet lovers, however, Samsung has made its lower tier competitive again. It's not perfect — the viewing angles could be much better and there's some menu stuttering here and there — but the Galaxy Tab 7.0 Plus does everything its larger siblings can do but in an even more portable format, which is in and of itself and achievement.
Compare this: Galaxy Tab 7.0 Plus vs. the Galaxy Tab family
Samsung really does have a size for practically everyone at this point, but there's one important caveat here. The .7-inch elephant in the room. There is a Galaxy Tab 7.7 on the roadmap, and it has all-around better specs — a 1280 x 800 screen, 1.4GHz processor — and as of September 1st, it was reportedly due out "in the next couple months." So as is usually the case, if you can wait even just a little bit longer, your options will greatly expand.