Apple believes OS X Lion adoption has been "staggering," with one million downloads in the first day of availability and over six million downloads reported at the "Let's Talk iPhone" event in early October. But data analytics firm Chitika doesn't see Lion as a runaway success — it believes Lion adoption has slowed significantly since September. From June through August, Chitika reported Lion's share of all operating systems grew four percent each month, but has since slowed to one percent. Chitika also claims Lion's overall market share is less than two percent, compared to Snow Leopard's five percent, and that its share of total OS X users is 16 percent, signficantly trailing Snow Leopard's 56 percent.

While interesting, we shouldn't accept these numbers as gospel — Chitika measures online advertising and search exposure, so there may be bias inherent in its data. And, of course, Snow Leopard's been on the market for nearly two and a half years, while Lion's been available for less than four months... not to mention Tim Cook's statement that Lion sold 80 percent more than Snow Leopard over the same launch time period. While Chikita may have found some chinks in Lion's armor, it's far too soon to call Lion a failure. 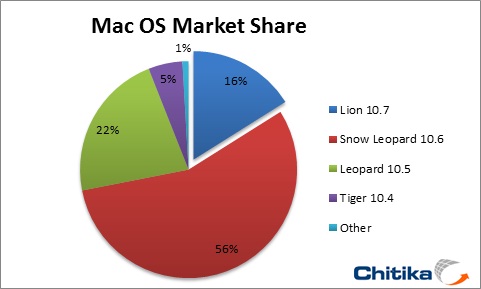