I've read repeatedly the same statement from both sides of the iOS fence. The lovers and haters alike both say; "The iOS homescreen is showing its age." or "The icons on iOS seem lifeless."

While those of us with an iPhone, or some other iOS device more than likely still find the OS just as beautiful as it is functional, I don't think anyone would complain with a bit of functional change. Sure, Apple has made a bit of use of this idea in iOS 5, with the Notification Center having a Stocks and Weather widget. Some people assume eventually Apple will open the API to developers and soon enough all of our iDevices will be exploding with useless RSS widgets as far as the finger can scroll. But I feel like this is the wrong place for such a much desired feature. I'd much rather leave the Notification Center for notifications, but I don't want to lose that bit of newly added functionality.

What I propose isn't unthought of. I'm sure others have had the idea, but I haven't seen it actually presented in a way that people can see and get into. It's actually quite a simple implementation, and given already existing developer API's such as those released with iAds (Yick) hadware accelerated widgets could be easily integrated in a very fluid and familiar way that keeps the current aesthetics of the iOS home screen layout.

Any application can also have an included widget. Whether the user wants to see just the icon or the widget would be their choice, and easily selectable right from the homescreen using already existing user interactions.

We all know what happens when we hold down on a icon on the homescreen. They start a-jigglin'. Applications downloaded from the Appstore or loaded on from iTunes have that little black circle with the "X" that you can use to delete it. My idea would involve the same method. 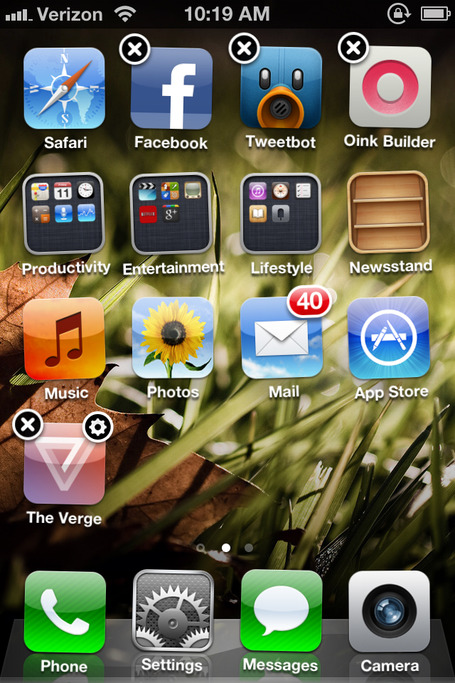 Say you downloaded an application, in this example I use the non-existant-as-of-yet "The Verge" app, and it has the ability to also be a widget on your homescreen. After holding down on the widget to send your homescreen into seizure mode there would be a new badge on said icon.

Pressing that badge would prompt the user asking if they want to enable the application as a widget on their homescreen. Saying "Yes" would result in the icon expanding across the length needed to display the widget as determined by the developer (I suppose if you wanted to get super in deep into the idea it could also be adjustable by the user if the hypothetical widget supported it, but I have a limited amount of time to do all of this before work, so just leave those holes covered) and you would finalize the change by hitting the home button to get everything back in straight order. 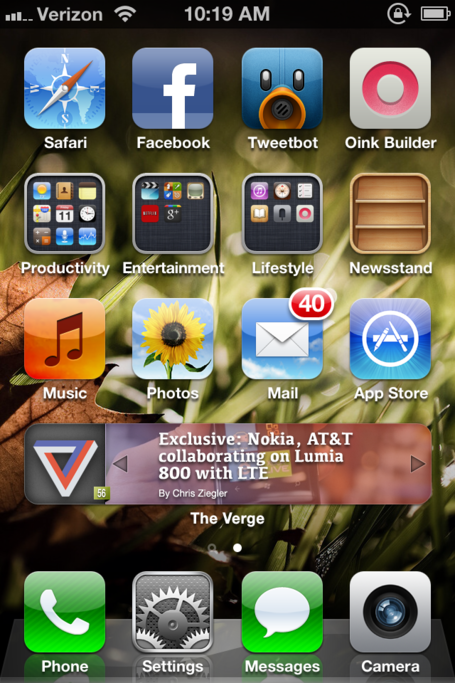 (I'm particularly fond of the fake Verge widget I made up, so if this never comes to fruition I'm going to do my best to actually create it using existing jailbreak homescreen methods.)

Back to the point:

I'm running out of time, and I'm sure most have stopped reading this post months ago, but the main question I ask is this:

Is there really so much desire for a solution similar to this in the iOS world? And if so, what changes would you make, add, take away, etc.?

DISCLAIMER: I know people are going to be dying to detail how this is a riff on Android, and to an extent of course it is. You're right, you've won a troll-doll. Congratulations, please don't make this the main point of your comment, or if you do, please be constructive.