Toshiba's ultrabook comes gunning for the MacBook Air with a lighter design, more ports, and a cheaper price

In the last couple of weeks, ultrabooks — Intel’s new category of ultrathin and ultralight laptops — have been arriving one by one, each aiming to derail the MacBook Air’s lead with a mix of competitive pricing and new features. But none of them have been successful; each has had its own set of compromises which just haven’t been worth the savings. To recap: the Acer Aspire S3 had a slower hard drive / SSD combo and atrocious keyboard, the Asus Zenbook UX31 had unforgivable trackpad issues, and the Lenovo IdeaPad U300s’ price didn’t undercut the Air enough to excuse its missing SD card slot and lower resolution display.

The Toshiba Portege Z835 is the fourth ultrabook to hit the market this fall, and it offers the most intriguing price / performance mix yet: it's just $900, but includes a number of attributes the others don’t, including a backlit keyboard, more ports (full size Ethernet, VGA, and HDMI jacks), and a lighter chassis. Could the Z835 be the no-compromise ultrabook that finally beats the Air on pricing and features? Is the fourth time the charm? Read on for my full review.

Switching from the Lenovo IdeaPad U300s to the Portege Z835 is like changing out of a beautiful dress into an old pair of sweats that you’d rather no one ever saw you in. Yes, that’s my way of saying the laptop just isn’t that attractive. Toshiba’s done quite a nice job slimming the machine down and keeping it very light, and I will get to that in a second, but the aesthetic is simply outdated. It’s actually reminiscent of this Toshiba from the late 80s in terms of the coloring. Not everyone I showed the laptop to thought it was as unattractive as I did, but we all agreed that Toshiba should have spent more time on the look and chosen something other than lifeless graphite grey. I got the "does it come in black?" question from more than one person — and no, it doesn’t.

It's not all bad, though: the Z835's trim dimensions and light weight disguise its uninspired design quite a bit. As you can see in the chart below, at 2.47 pounds this is the lightest ultrabook to date (yep, even lighter than the 13-inch Air), and the savings are absolutely noticeable in a bag or in hand. The laptop is lighter than most 10-inch netbooks, and it truly doesn’t feel like a 13-inch laptop when you're porting it around in one hand. The flipside to the light weight is the fact that the machine doesn’t feel all that well-made. Unlike the aluminum MacBook Air or Lenovo U300s, the Z835 is made of a magnesium alloy casing which doesn’t feel as tough as those more solid machines. Toshiba says its "enhanced honeycomb rib design" and beefed-up internal structure give it great shock absorption — and that may very well be the case — but there’s just something about the entire package that makes it feel more flimsy than the others. That also shows in the extremely wobbly screen hinge, a part that was very sturdy on both the Zenbook and the U300s.

If there’s one place the Portege’s hardware has the other ultrabooks and even the Air beat, it’s on ports. Despite being just .63 inches at its thickest point, the back edge is stocked with full-sized Ethernet and HDMI ports, a VGA socket, and two USB 2.0 jacks. The right edge has an additional USB 3.0 port and the left edge is home to a 3.5mm headphone jack and an SD card slot. Basically, it’s got the port lineup of a regular mainstream laptop, and that’s impressive for its size. 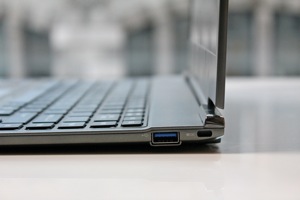 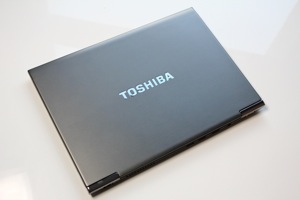 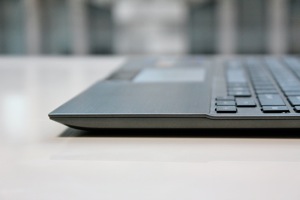 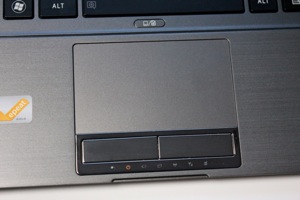 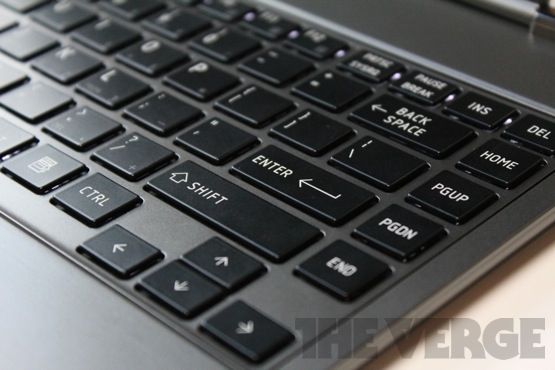 If you’ve ever laid your hands or eyes on Toshiba’s Portege R830, what’s under the lid of the Z835 will look very familiar. There have been relatively few, if any, tweaks to the chiclet keyboard, which means I still think the black squared-off keys are a bit too shallow and vertically narrow. That said, the Technia font of the letters is unique, there are full-sized shift keys, and it’s backlit. That last attribute is a big one, considering none of the other ultrabooks have had illuminated keys. I enjoyed typing on the panel in a dark room, but you can't control the overall backlight brightness as on the Air — you can only turn it on and off by hitting Fn + Z.

The trackpad on the Z835 is a return to normalcy. The plastic pad doesn’t have integrated mouse buttons like the other ultrabooks do; two glossy buttons live right underneath the 3.3 x 1.8-inch pad. The buttons are mushy, too shallow, and can become seeped in thumbprints, but I’ll take that over finicky built-in buttons any day. There’s something to be said for the ease of use of the old layout, and I have had no problems navigating around, which isn’t something I have said of the other ultrabooks to hit. Two-finger scrolling isn’t enabled out of the box (you have to dig into the mouse settings for that), and I can see why; it was very stuttery and required a bit of effort to get to the bottom of this very site. That said, the right side of the pad functions as a scroll strip and is much more responsive. As I’ve said, in all of these reviews, Apple still makes the best touchpad in the industry; the experience of navigating and the multitouch gestures are a clear cut above those offered on the Windows laptops. 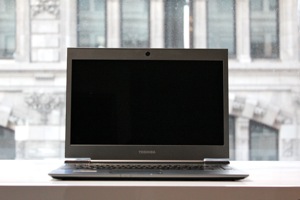 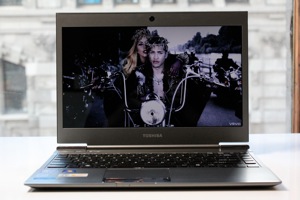 Toshiba’s never been known for using great laptop LCDs, and that doesn’t change with the Z835. The 1366 x 768 display is washed out and colors just look muted. Additionally, off-axis viewing is a problem; I couldn’t see a lot of the screen while sitting to the left of it and tilting it backwards caused lots of color distortion. To add to that, the thick, bottom horizontal bezel propping up the screen is just distracting. (Not to come back to that Toshiba from the 80s, but the bezel does look quite similar!) The panel quality and the lower resolution in comparison to the Air and the Asus UX31 are disappointing, though to be expected for a laptop with a starting price of $900.

The speakers, located on the front lip of the machine, aren’t as impressive as those on the UX31, but they are decently loud. I was able to hear some songs from our eclectic Verge Rdio playlist from across my one-bedroom apartment, though the sound was predictably flat. Similar to the IdeaPad U300s, the Portege comes Intel Wireless Display (or WiDi)-ready. That means you’ll have to pick up the $99 box for your TV yourself, but you will be able to stream video and audio to your HDTV without plugging in an extra receiver into your laptop.

To keep down the price, Toshiba equips the entry-level $900 Z835 with a Core i3 processor, 4GB of RAM, and a 128GB solid state drive. The 1.4GHz Core i3-2367M processor is lower-powered than the Core i5 and i7 CPUs we’ve seen in the Asus and Lenovo, but the performance is still rather peppy. I noticed some lag when installing programs, but for the most part the laptop was able to provide enough power for my everyday tasks — writing this review in Microsoft Word while simultaneously chatting in Trilian, checking TweetDeck, and managing Chrome with over 15 tabs open.

Of course, the 128GB Toshiba SATA II SSD (the model number is THNSNB128GCJ for those wondering) does give the Z835 an added push, but the drive isn’t as fast as others in real-world testing. Transferring a 1.8GB file from a USB 3.0 external hard drive took 35.6 seconds when plugged into the 3.0 port and 54.5 seconds when plugged into the USB 2.0 port. It took the Lenovo U300s half the time at 15.7 seconds (via USB 3.0). Additionally, the Z doesn’t boot as fast as the others; it took 36.9 seconds to start up, while the U300s boots in 25.8 seconds and the Air in 18 seconds. It also takes six seconds to resume from sleep, while the Air takes about three. Still, those are respectable times when you consider how much faster it is than a regular laptop with a spinning hard drive. 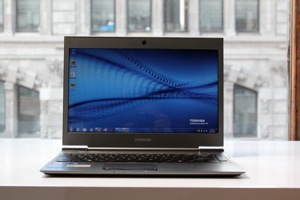 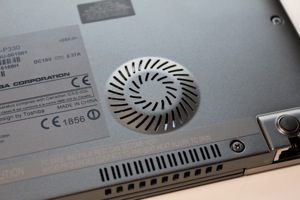 Graphics performance is what you’d expect from Intel’s integrated HD 3000 — just fine for full HD streaming and local video playback, but not what you’d want for firing up Just Cause 2. However, when running the benchmarks and playing a Flash clip for three minutes, the large fan on the bottom of the laptop got quite loud. It kept the entire chassis cool — neither the palm rest nor the bottom got overly warm — but it is distracting. 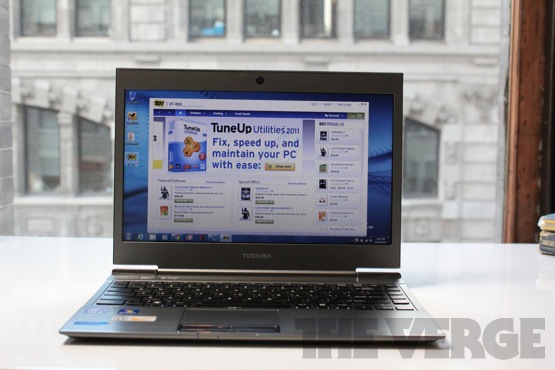 I worried that for the $900 price Toshiba may have skimped on the battery, but I was pleasantly surprised. The 47Wh battery lasted five hours and 51 minutes on The Verge Battery Test, which cycles through a series of 100 websites and other high resolution images with brightness set at 65 percent. When I used the system as my main rig, which included writing this review, surfing the web in Chrome, listening to Rdio, and checking Tweetdeck, I got closer to 6.5 hours on a charge. That’s a bit longer than some of the other ultrabooks, but not as long as the Air.

The preloaded software on this laptop actually made me shake my head in disappointment. Because the model I reviewed is a Best Buy exclusive, it came with the retailer’s own app store, which has a selection of software and games for purchase. Additionally, the preloaded IE9 and Chrome browsers come with Norton Antivirus toolbars and there's Toshiba's BookPlace and Bulletin Board software. I’ve seen Toshiba do worse when it comes to bloatware, but this is the worst offending ultrabook when it comes to preloaded software you’ll likely get annoyed with.

Our review of Toshiba Portege Z835 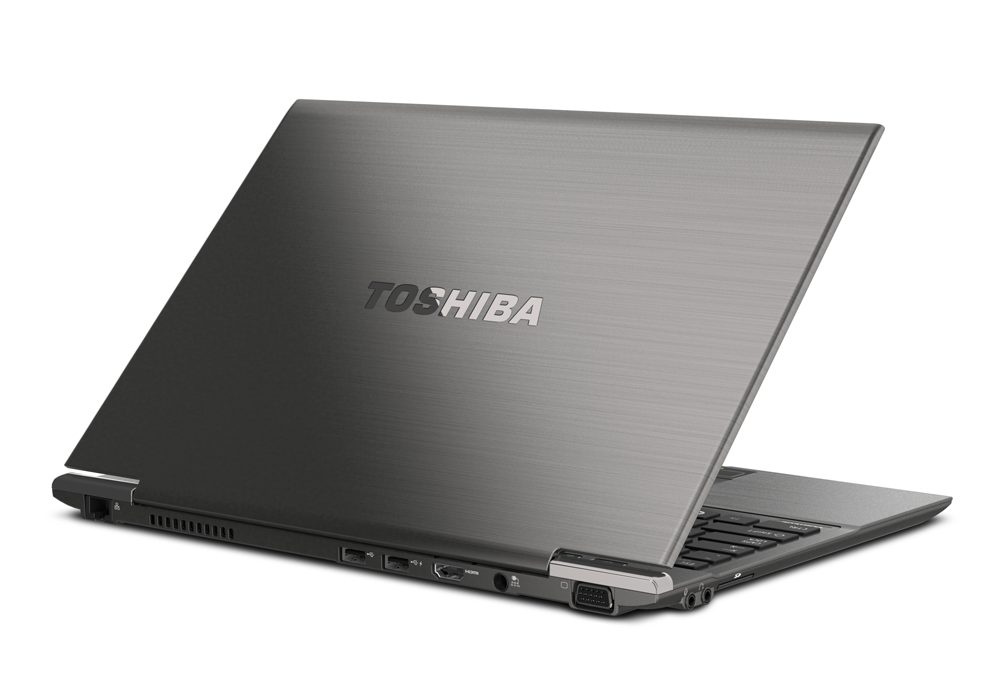 Of all the new ultrabooks, the Portege Z835 actually comes the closest to achieving Intel’s vision. For $900, Toshiba now sells a laptop that isn’t only lighter than the MacBook Air, but has solid performance, good battery life, all the ports you could want, and decent ergonomics. It’s a very good mix of features for the price, but naturally you'll live with sacrifices for that savings. And when you consider that spending $399 more for the entry-level MacBook Air buys you a better display, some more battery life, a faster Core i5 processor, and a much better looking and feeling laptop, the choice isn’t all that obvious. Especially since the Core i5-powered Z835 costs $1,100. If you absolutely only have $900 to spend on a laptop, the Z835 is a fine choice; the problem is that even four ultrabooks later, the $1,299 MacBook Air continues to be the best choice in a newly-crowded market.
Update: Since writing this review the price of the Z835 has dropped to $799.99 at Best Buy. Obviously, that makes this the best bang for your buck ultrabook. At this point, there's really no beating the features you get here for under $800.