In case you haven't been reading "The Verge"

Intel is pushing the Ultrabook standard as a competitor to the Macbook Air; ultralight laptops less than 3.5lbs, that have excellent battery life, adequate power for most mainstream uses, and a starting price around $1000. The sole purpose of these devices, unquestionably, is to dethrone the Macbook Air as king of the heap. Therefore, in the course of this argument I will ignore the offerings from Acer, Asus, and Lenovo (ironically) and will tackle the Air head on.

Why the Air is King

Ranging in size from 13.3" down to netbookian 11", the Air provides the Big 3, screen resolution and quality, excellent user interface devices (keyboard and trackpad), and meaningful power attached to a long battery life, all while being in a chassis that weighs less than 3lbs and is not much thicker than the charging port. Simply incredible; except, for some of us, even the most powerful model available with a 1.8Ghz i7 and 4Gbs of RAM just don't quite cut the mustard. Especially if you're doing "Real Work" as the Microserfs like to say, or like Josh during the podcast mentioned, trying to do more than have a browser open alongside Garageband. 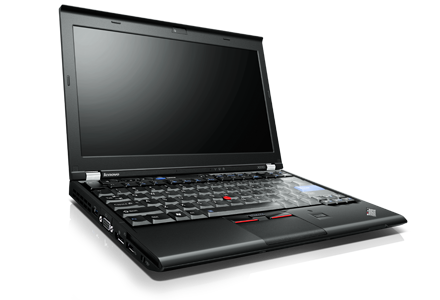 Why the X220 is a worthy challenger

Lenovo has had a lock on the 12" form factor since the X200, and this hasn't changed much with the 12.5" X220. With the familiar black, squared, magnesium body of all Thinkpads, it looks rather unremarkable from the outside. Not an inch of the laptop is glossy; even the screen is matte (fist pump)  which boasts the same 1366x768 resolution as the 11.6" Air and is available with an IPS panel. On the outside is the legendary, spill proof Thinkpad keyboard, of which the only ill thing that can be said of it is that it isn't backlit. The touchpad front is a touchy (Ha!) subject due to the fact that the touchpad is competent but isn't brilliant like the Air. However, it does have the trackpoint, which after using for an extended length of time, makes me cringe at touching any other mouse or touchpad. Since you never have to remove your hands from the keyboard, the trackpoint allows you to navigate all of your webpages without slowing your typing speed down at all; there is no pause between the end of you moving the cursor and resuming typing. They used to not even offer the touchpad as an option and just give you the trackpoint. If I had my way that would still be the case, but I realize my opinion here is probably not the prevailing one.

On the inside though, is where our suit clad super-hero shows his true strength. Unlike the ULV offerings in the Air, the X220 packs a more potent regular voltage CPU. Starting with a fairly ho-hum 2.3Ghz i3 with the base configuration (coming in $100 cheaper than the base config of the 11.6" Air and packing twice the RAM), it ramps up to a 2.8Ghz i7 that can Turboclock to 3.5Ghz! The battery life is incredible, even with the standard 6-cell battery. Detailed results available Here, and Here for the i5 versions, but since the TDP for the i7 version is the same, the differences should be negligible. There's also 2 extended battery options, which are 2 more options than Apple gives you. All of this in a machine that is between the opposing Air models in weight, offers USB 3.0 which currently is vastly more useful than Thunderbolt, better RAM options in that you can either (A) get up to 8Gbs from the factory or (B) upgrade the RAM yourself at less cost and not void the warranty. The same can be said of the HDD or SSD depending on your wallet size and storage needs.

Here's a head-to-head comparison of the Air(s) and the X220; ignore the statement that the X220 is discontinued because that most definitely is wrong. The X220 shows that somebody other than Apple is capable of putting together an excellent machine that performs incredibly well in a tiny package. It may not be as thin and sexy, but the strain on your back isn't any more than that of the 13" Air. It may not surpass the Air in screen resolution, but it is a matte screen, and it keeps up with the current King of the Hill so it certainly isn't a con.

My question, however, is WHY HASN'T ANYONE NOTICED THIS LAPTOP!? Why are people not flocking to this instead of the Asus Zenbooks? Because it's not quite as thin? Even though its cheaper, more powerful, has a better keyboard, CPU, battery life, and trackpad/trackpointer? So, there you go Vergins; you've been put on notice.

(DISCLAIMER: I have *not* physically owned an X220; I'm writing this post on an X200. If anyone would like to send me an Air, or an X220 to review, I will be more than glad to. I'm doing this in response to the Verge's call for writers. I currently write a monthly article on the outdoors, but am looking to branch into Tech since my day job is a sys-admin. Any comments, good, ill or otherwise, are appreciated. Thanks)