Eco-friendly Tron: Legacy fans can have their neon cake and eat it too with Evolve Motorcycle's Xenon, an all-electric replica of the film's iconic lightcycle. Recently shown off at the Milan International Motorcycle Show, the bike features a 40,000 watt motor powered by a custom lithium-ion battery system, an OLED light tape, and can propel you through the rain-slicked night on its 32-inch hubless wheels at up to 100 miles per hour. The three hour charge time will net you an average range of 30 miles, though Evolve says that can be stretched to 100 miles based on speed and weight. Based on the gasoline-powered model created by Parker Brothers Choppers last year, the futuristic beauty can be yours for a cool $55,000. 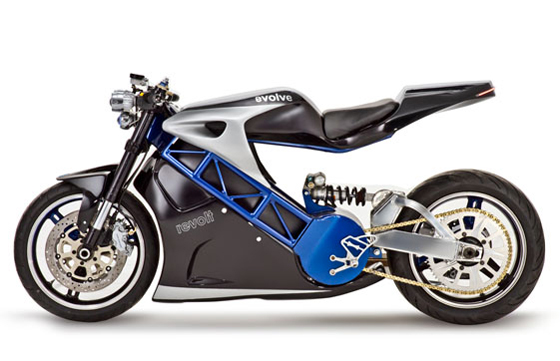 Having focused on high-end electric scooters up to this point, Evolve will also be adding the Parker Brothers-designed electric Lithium sports bike to its line-up. While perhaps not as exciting to the average geek as the Xenon, the Lithium features similar specs — 40,000 watt motor, and the same maximum speed — but you'll be getting an average 100 mile range from 3.5 hours of charge time, in a much more rideable form factor. There's no word yet on availability for either model.