The PlayBook will be discounted to $199 at Staples on Black Friday, while its price is dropping in Canada through December 1st.

Share All sharing options for: BlackBerry PlayBook $199 on Black Friday, discounted in Canada this month (update)

The BlackBerry PlayBook has been met with lackluster sales since its launch this spring, and it's no mystery why: it shipped without key BlackBerry features like email, calendar, and BBM. After retailers temporarily slashed prices in an effort to boost sales earlier this year, they're back at it again. In the US, Staples will be selling the 16GB version for $199 on Black Friday, while a tipster has informed us that most Canadian retailers will be permanently dropping the price of PlayBooks beginning December 18th: $199 for the 16GB model, $299 for 32GB, and $399 for 64GB (see flyers below). This discount makes the BlackBerry tablet price competitive with new devices like the Kindle Fire and Nook Tablet, and there's supposed to be a software update on the horizon that adds in some of the missing features. Hopefully it comes soon, or the PlayBook might get left behind, despite the hot deals.

Update: Our original tipster tells us that the Canadian deal will actually begin November 18th and run through December 1st, and that it might not be a permanent price drop after all. However, a second anonymous source also shot us the Best Buy / Future Shop flyers below, and those deals don't look very limited. 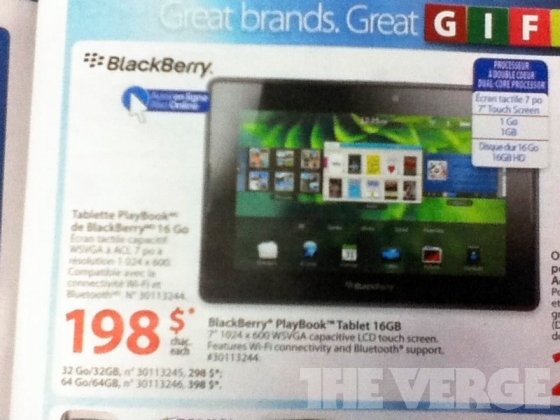 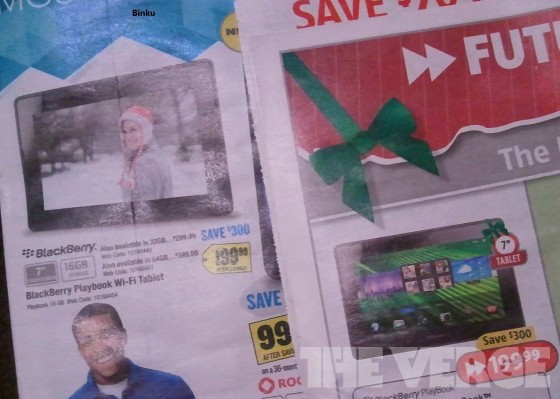