Internet heavyweights including Google, Facebook, Twitter and Yahoo took out a full-page ad in the New York Times in opposition to the Stop Online Piracy and PROTECT IP Acts. The timing of the ad coincided with a hearing on the SOPA Wednesday morning.

A group of nine internet and technology companies including Google, Twitter, Facebook, Yahoo, and Zynga ran a full-page ad in the New York Times yesterday, voicing their opposition to the proposed Stop Online Piracy Act (H.R. 3261) and PROTECT IP Act (S. 968). They're not happy that the the two proposed bills will modify the "safe harbor" provision of the Digital Millennium Copyright Act (DMCA), which protects companies hosting content from copyright violations so long as they make good faith efforts to remove infringing material when they're given notice from the owners.

The timing of the letter, entitled "We stand together to protect innovation," coincided with a public hearing this morning that saw testimony from the MPAA, Pfizer, Google, the U.S. Library of Congress, the AFL-CIO, and MasterCard.

The big concern for these companies is increased risk of liability for infringement — the proposed bills provide new penalties for copyright infringement on sites that host user-generated content. Under the DMCA, copyright owners are responsible for doing the grunt work of finding infringing material, and requesting that it get taken down. Under the new scheme, sites dedicated to providing stolen content would be subject to harsh penalties — and while a site like YouTube that plays ball with the DMCA isn't the point of the bill, there's a legitimate fear of collateral damage and increased cost of compliance and enforcement. You can see why a company that hosts a ton of user-generated content like Facebook or Google would want to keep things as they are.

We'll have lots more on SOPA in the coming days, but for now see the links below for full text of the bills under discussion. 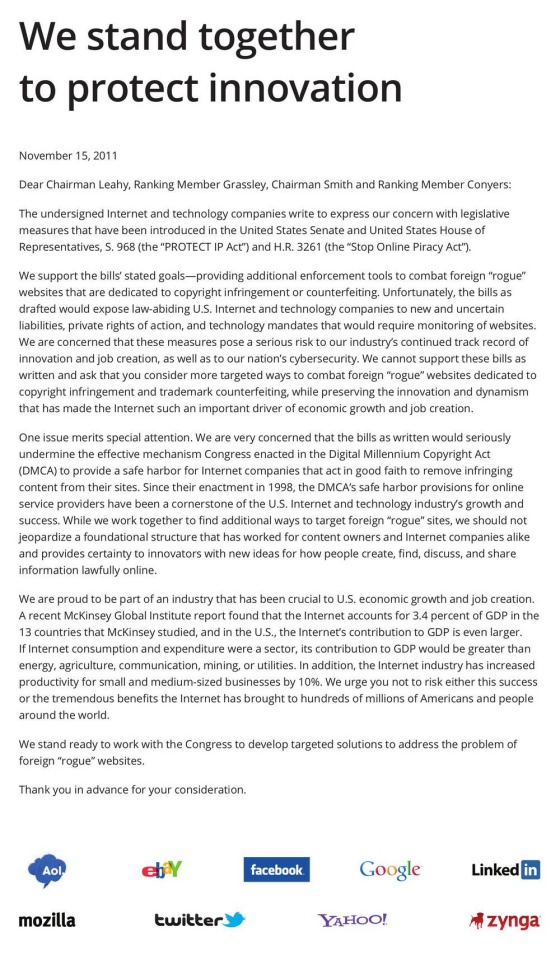 More from this stream The Stop Online Piracy Act: the SOPA story so far