Wolfram Alpha has added a new "flights overhead" tracking option that provides accurate data on flights near a user's location. You can now find out exactly where a flight flying past you is headed to, and even where it's coming from.

Wolfram Alpha, the search engine that's more than just a search engine, has added a neat new trick to its repertoire: it can now answer the question, "where is that plane overhead going?" More than that, it can tell you where the flight's coming from, what airline is operating it, the altitude the plane is flying at, and even its angle from the horizon relative to you. All that info is coming into Wolfram Alpha from the US Federal Aviation Administration, though it arrives with a five-minute delay that means Wolfram's real time data is actually a projection of each plane's position — calculated on the basis of its last known heading, speed, and altitude — rather than a perfectly accurate measurement. Another limitation that arises from the source of the data is that the "flights overhead" search string only works for flights with at least one endpoint in the US.

Still, the functionality that's been offered here shouldn't be underrated. You can now look up flight delays on a particular route, check when the next flight will be, and even see an interactive sky map that tracks jets as they make their way through the rarified air. It's the location and time of your query that bring all that data together into something that's contextually relevant to you. The futuristic sense of doing something really cool comes as a free bonus. 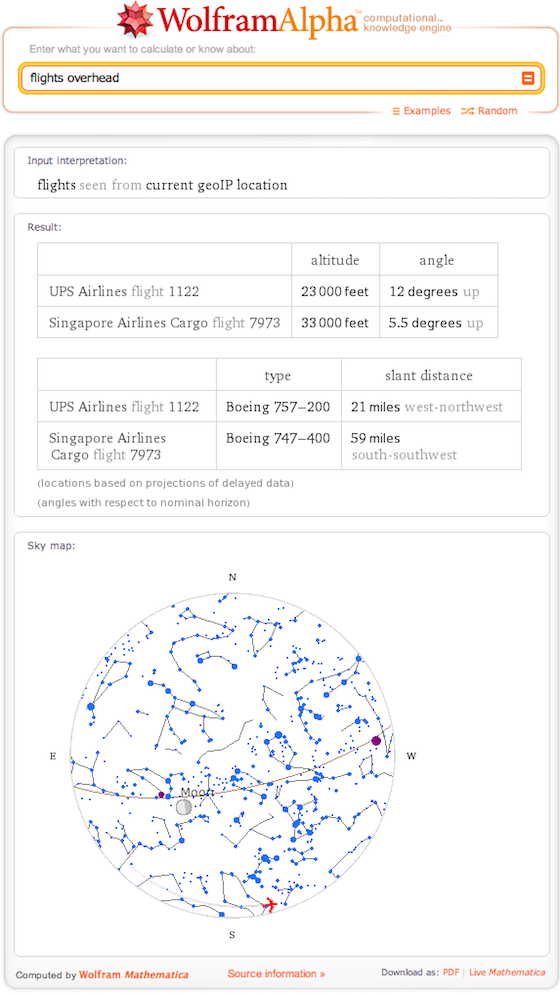