According to All About Windows Phone, Microsoft's Windows Phone Marketplace has gone from a few thousand apps to a milestone 40,000 in just over a year. In terms of raw numbers, this leaves it well behind the iTunes App Store and Android Marketplace (both are quoted at around the 500,000 applications mark), but the rate of growth looks very promising. This is no doubt helped in part by Microsoft's huge push to attract developers, including handing out over 2,500 free phones in an attempt to bolster the marketplace.

If this current rate of growth is sustained, the Marketplace will reach the 50,000 mark in early January 2012. However, it's worth noting that this total is for published apps — over 5,000 have been removed either by the developers or Microsoft since the Marketplace was launched — and that this is a total number, so your mileage may vary country by country. With Nokia now fully on-board, and early sales figures for the Lumia 800 looking promising, Windows Phone looks to be gaining momentum in the race for mass adoption. 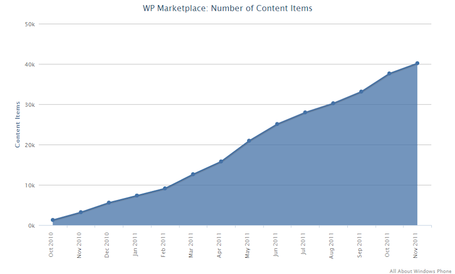