New leaks suggest that Verizon could be targeting December 8th for the release of the hotly-anticipated Galaxy Nexus.

Source TechFanatiX (Twitter) and Droid Life | Via Android and Me

The Galaxy Nexus's launch date on Verizon has metamorphosed into one of the great tech mysteries of the year — pretty much every day in November has been rumored at one point or another, and Google has generally indicated that we'd see it before the month is out. Verizon, though, has stayed uncomfortably silent on the matter through the whole process. New intel this evening out of Droid Life (with corroborating evidence from a Twitter user named "TechFanatiX") suggests that we may now be looking at December 8th, which misses Black Friday entirely and is probably about as far as Verizon would want to stretch this and still capitalize on the holiday sales push.

Why so late? Who knows — American carriers have a reputation for miring new releases in thick layers of testing and certification, and that could certainly be the case here. It's also possible the carrier is looking to give the Rezound and Droid RAZR some breathing room, both of which are considered headline releases — the latter has already had a couple expensive-looking television ads air in primetime — and there's no question that the release of the Galaxy Nexus will cannibalize some of those potential sales.

More on this as it develops. 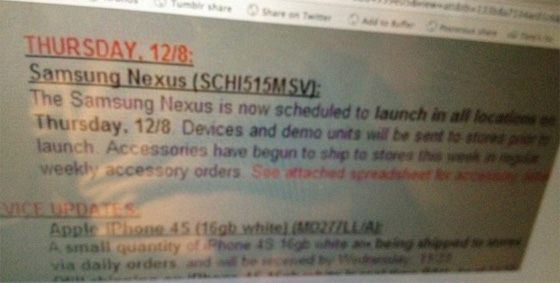