Has Samsung created a real competitor to the iPod touch?

Though iOS and Android are engaged in a cutthroat battle for smartphone supremacy, the iPod touch has reigned largely unchallenged in the media player market. Samsung aims to change that with the Galaxy Players, which are basically 4- and 5-inch Galaxy S phones minus the phone parts — they still have full Android Market access, all the excellent Google apps, dual cameras, and solid internals.

In addition to the formidable challenge of competing with the iPod touch, the Players — at $229.99 for the 4.0 and $269.99 for the 5.0 — also have to deal with cheap, no-contract Android phones that keep their phone bits and still manage to be priced competitively with the Players. Can Samsung give them enough of an edge to make it worth the money? Read on to find out.

While the Galaxy Player 5.0 is large enough to be unmistakable (at least until the Galaxy Note comes to the US), every single person who’s picked up the Player 4.0 review unit in our office has inevitably responded with some variant of "wow, this looks exactly like the iPhone 3GS." And indeed it does: the contours are similar, the plastic backs are similar, and even the silver bezel seems ripped directly from Apple’s design. The iPhone isn’t the worst design to copy, though, and the Player is good-looking if a little cheap-feeling. Both have black fronts and black or white backs, and otherwise adopt the look and feel of the original Samsung Galaxy S, only without with the Android search button.

There’s 8GB of storage inside each Player, with a micro SD slot for up to 32GB more. Both support Wi-Fi and Bluetooth, and have front and rear cameras. There are some differences between the two Player models, though, and they’re both purely aesthetic and kind of puzzling. The Player 4.0’s headphone jack and USB port are both on the top of the device, while the 5.0’s are on the bottom; the 4.0’s power button and volume controls are on opposite sides, while the 5.0 crams them precariously close to each other on the right. The 4.0 also has a removable back with a microSD slot inside the case, while the 5.0 has a non-removable back and a microSD slot up top. Neither is necessarily a better strategy (though I preferred the 4.0’s layout), but it’s strange that Samsung wasn’t consistent with how it built the devices.

Samsung’s high-end phones seem to have landed somewhere between 4.3 and 4.5 inches, which is a pretty optimal size for a cell phone; for some reason Samsung decided to go bigger and smaller, and as a result both Players feel like they're the wrong size. The 4.9-inch tall, 2.5-inch wide Player 4.0 is easily usable in one hand, and is very pocketable, but it feels slightly too small next to Samsung’s phones. The 5.0, on the other hand, is humongous. Its 5.6 x 3.6-inch body feels too big to use in one hand or slip into a pocket, but it’s still too small to use comfortably with two hands. It’s a seriously thick .46 inches, even thicker than Samsung’s much larger tablets, and it weighs 6.4 ounces, which is pretty hefty compared to just 4.2 for the smaller Player. Both models have an 800 x 480 screen, which is relatively sharp on the 4.0, with the TFT LCD showing the same bright and vivid colors Samsung’s Galaxy S phones are known for. 800 x 480 looks comically bad blown up to 5 inches, though; everything is enormous, like it’s zoomed in for the partially blind.

Samsung’s nod to the iPod touch extends all the way to bundling Apple-style white earphones with the Players, though they’re different in one crucial respect: they don’t sound terrible. They’re not great, and don’t have a lot of bass response or dynamic range, but they’re more usable than most bundled earphones, and more comfortable thanks to the three different sets of tips included. There are two speakers on the back of both Player models, and they’re exactly what you’d expect — quiet, tinny, and prone to distortion, but decent enough to show a friend a YouTube video. 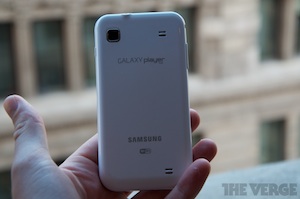 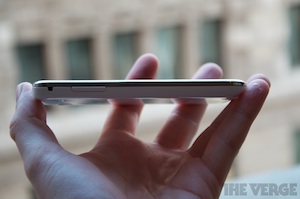 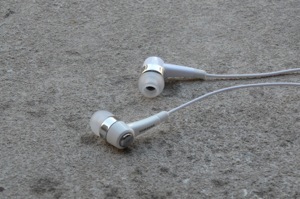 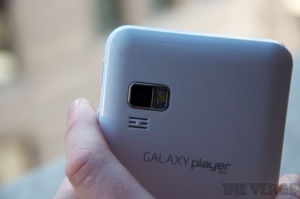 The 3.2-megapixel shooter on the back of the Player takes decent photos, but it’s maddeningly slow, which means you’ll get a lot of blurry pictures unless your subjects are trained as statues. Its photos are definitely better than the iPod touch, though. Video’s more of a mixed bag — I liked the Player’s footage, but it only shoots at 720 x 480, compared to the iPod’s 1280 x 720.

The front camera’s spec on the Galaxy Player is just "Yes," and that about describes it; there’s a camera here, sure, but you’re never going to use it. It shoots soft, blurry 640 x 480 images. It’s functional for video chat, but that’s about all, and since Android’s options — Skype, Fring, and the like — aren’t nearly as elegant as FaceTime, the front camera will likely sit mostly dormant. 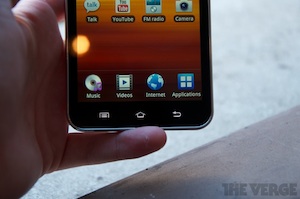 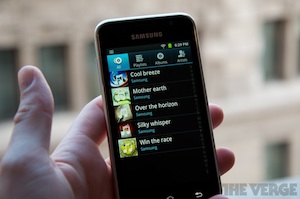 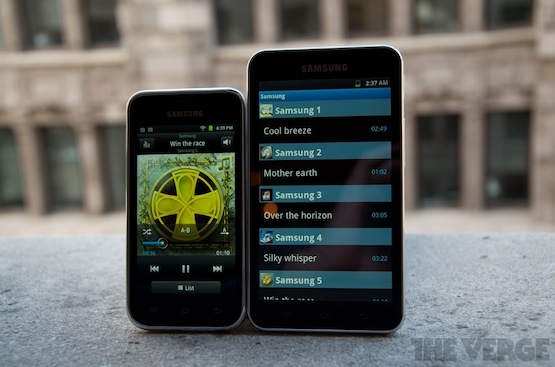 What you get from the Galaxy Player is Android, plus Samsung’s TouchWiz UI. I’m normally not a fan of TouchWiz, and the fact that the Player runs an older version of the skin (3.0 instead of 4.0) is particularly irksome. Samsung has done a lot to simplify and clean up TouchWiz in recent months, but none of that work made it to either Player, which still have colored boxes behind ugly icons, and clutter everywhere you look. There are a few things TouchWiz does really well, though, and fortunately most of them are related to media playback. There are playback controls in the notification window, as well as on the lock screen; that’s much better than having to unlock your phone and open the app every single time you want to move to the next song.

The primary problem is that the stock Android music player isn’t very good. It works fine, but is overly simple and not very nice to look at, and TouchWiz doesn’t do much to help. Happily, there are plenty of good music players in the Android Market: I’d recommend Google Music, Winamp, Uber Music, and DoubleTwist over the stock Android app, though those apps lose some of the lock-screen and notification window functionalities.

Other than the standard Android apps, there’s not much else preloaded on the Player. There’s a couple of Samsung apps like Samsung Smart View and Samsung Apps, as well as Social Hub and an FM radio app that I quite liked. The restraint is appreciated, especially since the hallmark feature of the Player is that you get full access to the hundreds of thousands of apps in the Android Market, as well as all the Google apps. One of the best Google apps is Navigation, which lets your Galaxy Player double as a GPS with turn-by-turn directions. It’s really, really slow, but it works even when there’s no Wi-Fi to be found.

One app that doesn’t exist for Android, sadly, is iTunes. Google Music is perhaps the closest analog (and is much improved after Google’s recent update), allowing you to buy music and sync it between the cloud and your device, but it’s not nearly as complete or seamless a system as iTunes. You can drag-and-drop songs from your computer, or manage them through other apps, but iTunes handily beats them all in being simple to use. The upside of being outside of the Apple ecosystem, though, is file support: the Player supports a lot more file formats than the iPod, especially when it comes to video playback; all my AVI files of The West Wing episodes were finally playable.

Over several days of using both Player models, I always wished they were just a hair faster. The 1GHz Hummingbird processor and 512MB of RAM aren’t particularly slow or laggy, but now that I’ve gotten used to newer hardware the Player just takes a split-second too long to do almost everything. Launching an app or going to the home screen was especially troublesome, and I occasionally had to mash the capacitive Android buttons a few times to get them to work. I noticed the sluggishness particularly when typing — I’d type four words before they would display, and then they’d all pop up on the screen at once. My benchmark tests backed up what I saw in use, too: I got Quadrant scores between 1,400 and 1,600 for both Players, which is a totally acceptable score but doesn’t even compare to the over-3,000 results from the Galaxy S II. The Player is quite clearly a year-old phone with the phone parts ripped out.

My iPod touch always felt like it lasted forever, only needing a charge every few days with regular use. The Galaxy Players are the same way; they lasted multiple days of relatively frequent use, though lots of Netflix streaming or radio listening did it in much faster. Most of that is just due to the Players’ lack of an always-on cellular connection (same goes for the iPod) and you’d probably get similar battery life from a phone in Airplane mode, but I was definitely impressed with the Player’s longevity.

Our review of Samsung Galaxy Player 4 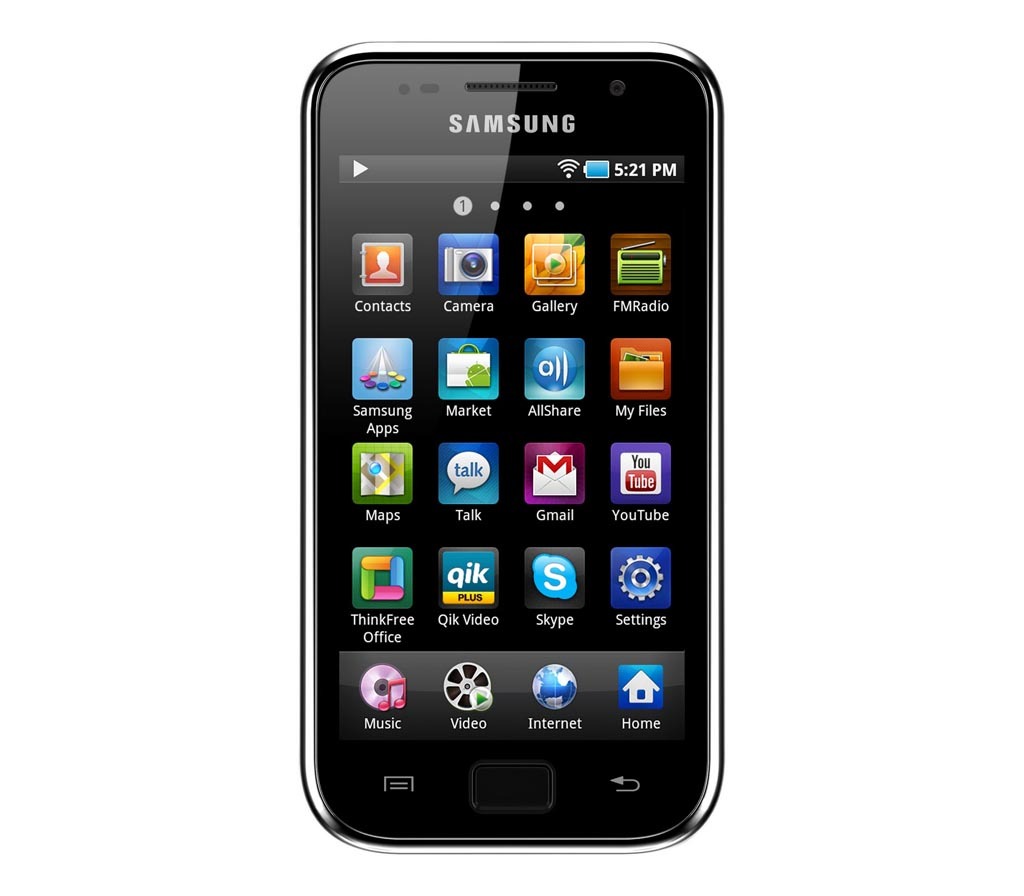 Do we really want an Android-based iPod touch?

The Samsung Galaxy Player has two distinct advantages over the iPod touch: its wide file support, and its expandable storage. Those are important features, and they might win some users, but they’re not enough to overtake the iPod. The iPod has access to more and better apps, it’s easier to sync and manage on your computer, and most importantly it’s just a better music player. Plus, when you can walk into a Boost Mobile store and buy the ZTE Warp phone for only $50 more, I’m not sure why you’d want the Galaxy Player. We’ve waited a long time for “the iPod touch for Android,” but if this is it I’m not sure that’s a very exciting concept.

Want to see how the Galaxy Players stack up against the iPod touch and Zune HD? Check it out right here in our product comparison!