Infinity Blade 2 has amazing visuals and refined gameplay — but don't expect the basics to change much from the original. What Infinity Blade 2 boils down to is moments of frenetic, somewhat terrifying, and carefully timed hack-and-slash combat separated by serene walks through sun-dappled courtyards.

No point burying the lede: Infinity Blade 2 for iOS is beautiful and a blast to play. Chair Entertainment and Epic have not radically altered the basic game mechanic or feel from the original game, but instead chosen to hone both to a sharp edge. We've gone through several hours of gameplay and can safely say that if you're a fan of the first Infinity Blade, you will want to pick up its sequel — available on December 1st for $6.99 as a universal app that will work on iPhone, iPad, and iPod touch. If you're not a fan, at least take a moment to check out the video and gallery below to see what mobile gaming can look like in late 2011.
The core gameplay for the sequel remains entirely unchanged: you move your character through lush scenery and encounter various bad guys, whom you fight by tapping and slashing across the screen. Unfortunately, as with the original, you cannot freely roam throughout the landscape; instead you're guided from one battle to the next via cutscenes which serve primarily to show off the game's graphical prowess. Light glints off buildings and casts shadows off creatures in a hyperreal way that frankly sometimes feels like showing off.

Although it wasn't available in the early build that we looked at, in our interview with Chair earlier this month, the company hinted that ClashMobs would be coming soon — allowing thousands of players to cooperate to defeat enemies. 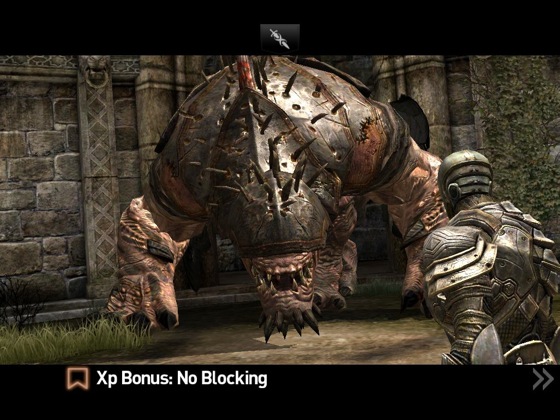 The monsters are just as big and mean as before, but the level of textural detail is an order of magnitude better than the previous iteration. There were more than a few times that we wished that the action would slow down during a fight just a little so we could take more time to appreciate the beast that we were pummeling — or more to the point, that was pummeling us. While there aren't any major new moves beyond the same dodge, block, parry, and attack, spells, supers and a few combos, Infinity Blade 2 does have slightly deeper combat. Each foe has a wider array of attacks, and it's more difficult to tell which one they'll dish out at a given time.
To compensate for the higher learning curve, you are given a larger variety of upgrade options as you progress. While you still maintain a constantly shifting and improving inventory of weapons, armor, and magical rings, this time around you can add "gems" to your items to give them customizable upgrade options. Chair Entertainment has also beefed up your weapon options — allowing you to "dual wield" two swords or opt for large, heavy battle axes in lieu of the original's basic sword and shield setup. The upshot is that you can find yourself choosing different styles of play as you progress, and each feels different; we naturally went for maximizing damage and minimizing defense.That meant we died quite a bit, but "death" in Infinity Blade 2 has the same meaning it did before: just another chance at rebirth and grinding through the same castle of monsters again. If you'd like to progress faster, there's also the option to purchase in-game cash with actual cash via an in-app purchase. Heck, there's even a link to purchase an e-book based on the Infinity Blade universe if you feel the need to part with more real money. 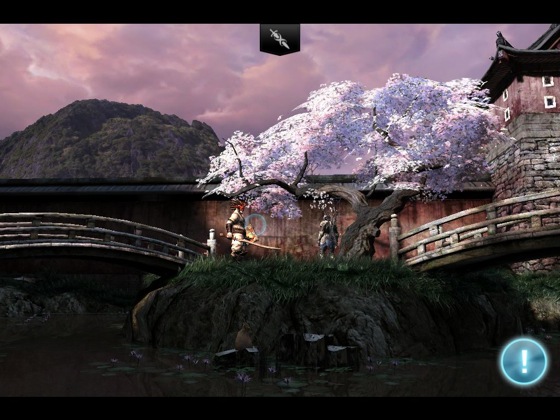 Infinity Blade 2 starts with a bit of forgettable plot that takes place in a Japanese-style garden, complete with petals falling into koi-filled ponds. Enjoy that scenery while you can, because it won't be long before you move on to the main castle. Although it's just as finely detailed, it's much bleaker landscape. On the bright side, compared to the first game it has more doors and pathways to take, which helps break up what can eventually feel like a slog. Another difference is that the sequel is a little stingier with doling out cash. As with the first game, you can pan the camera during cutscenes to hunt for bags of money to grab instead of fast-forwarding through them. You'll need to take the time to let those scenes play out so you can get the upgrades, which at least looks pretty while you hunt for keys and coins.

We don't want to give the plot away, except to say that there is just a little more story to be had here than with the original. The innovation comes not from the gameplay or the plot, but from just how far Chair Entertainment has pushed the capabilities of the latest iOS devices. We tested Infinity Blade 2 on an iPad 2 and iPhone 4S — and in both cases the game loaded faster and felt about as smooth as the original game on the same hardware.
What Infinity Blade 2 boils down to is moments of frenetic, somewhat terrifying, and carefully timed hack-and-slash combat separated by serene walks through sun-dappled courtyards. Can it get monotonous? Yes, but we suspect you'll get your $6.99's worth before it does.

Sean Hollister contributed to this preview.