Canon's last effort produced the best point-and-shoot on the market, and this is its successor

From the day it was announced, I’ve been excited about the Canon PowerShot S100. Its predecessor, the S95, is still one of the best pocket-sized cameras on the market even a year after its release, and the S100 improves on many of its features — it’s got a wider lens, a faster processor, a new sensor, and GPS functionality — while keeping the S95’s litany of manual controls, great look and feel, and its promise of fantastic images even in poor lighting.

The small tweaks should add up to a noticeably better camera experience, but do they? At $429.99, the S100 is nearly in Micro Four Thirds or entry-level DSLR range, and we expect the S95’s price to drop significantly as the S100 hits shelves. Is the S100 worth its premium price tag? I’ve been testing it by itself and alongside its competition — read on for our findings in the full review.

The term "point-and-shoot camera" has come to encompass shooters that wouldn’t fit in anyone’s pockets, ever — like Canon’s monstrous PowerShot G12, for instance. The S100, however, is legitimately a compact, pocket-friendly camera, and a good-looking one at that. It’s 1.05 inches thick and weighs 6.98 ounces, which make it slightly hefty but not problematically so, and it slips easily into a shirt or jeans pocket. The camera comes in black or silver, and has a metallic finish that makes it feel really solid. One of the few design additions is a tiny plastic bar running down the right side of the front, which acts as a mini-grip and make the camera a bit easier to hold in one hand. Otherwise, the design is virtually identical to the S95, and that’s a really good thing.

The 3-inch LCD on the back of the S100 is filled with 461,000 dots. That’s pretty sharp, though we have occasionally seen better screens on cheaper cameras, like the Nikon Coolpix S9100’s ridiculously sharp 961,000-dot display. The S100’s display also muted some colors pretty severely, showing sky blue as several shades too light. Since there’s no optical viewfinder, and no hotshoe or accessory port for adding an electronic viewfinder, the display becomes critically important — this one’s good, but for the price I wish it were better.

Not having a hotshoe or accessory port also means you can’t attach a flash to the S100, though I’d guess that most people will be happy with the built-in flash, which is surprisingly bright despite being so small. It can’t move, though — being able to bounce the flash off the ceiling would be great, and some pocket cameras let you do so, but no dice here. There is an external flash that’s compatible with the S100, the HF-DC2, but it mounts oddly to the camera and is kind of humongous. 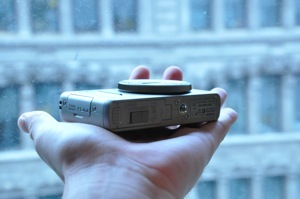 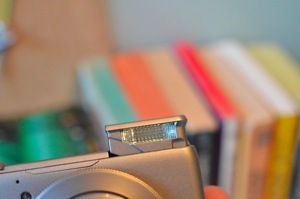 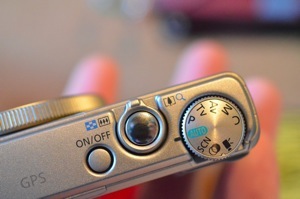 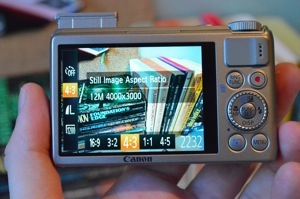 For a pocket camera, the S100 is absolutely littered with buttons and scroll wheels (as was the S95): there’s a mode dial, a zoom rocker, a power button, and a shutter press all crammed together on top, and on the back are four more buttons, plus the five-way control pad, which both clicks and scrolls. There’s even a ring around the lens, which spins to change things like shutter speed and zoom level. It’s useful, and fun to use; I felt like a pro, even with the tiny little camera. The ability to quickly change ISO, white balance, and shutter speed settings is one of the things I personally really need in a camera, and the S100 does it as well as any small camera I’ve used. That’s a big win for an expensive camera, which is really aimed more at DSLR owners wanting a smaller camera than at regular, everyday shooters.

As for the menu system, Canon’s interface is relatively standard across its point-and-shoot cameras, and it’s perfectly functional without being very impressive. I like that if you press the center button on the back, it overlays a menu on top of the viewfinder that lets you change common options like ISO, shooting size, and the like. Those options change depending on what mode you’re in (you see more if you’re in a manual mode than in Auto), and it can be confusing to figure out what’s where, but it’s certainly easier than digging through the full menu system every time. If you do ever need to get into the menu, it’s just gray text on a gray background — nothing to write home about, but it gets the job done fine. 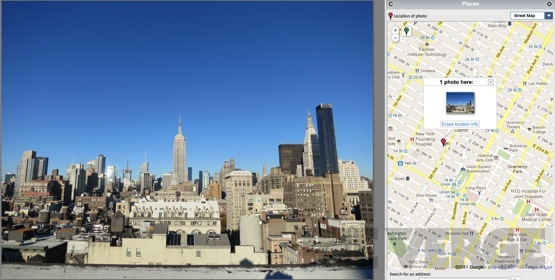 Canon doesn’t include that many funky shooting features in the camera. There are, of course, the obligatory batch of scene modes — Snow, Fireworks, Portrait, and more — but otherwise there’s not much to speak of. There’s an HDR mode, and a cool but confusing panorama mode — it helps you frame and shoot a cool-looking panorama, but it’s hard to figure out how to use properly. The first time I tried out the panorama mode, I wound up taking about 20 pictures and spinning all the way around three times in the process, before I realized you have to stop it manually. I, of course, did that in the name of testing.

GPS also comes built into the camera, which means you can geotag your photos. Most photo-management apps can plot your geotagged photos on a map, showing you where you were when you were shooting; it’s a really awesome feature, especially if you’re on vacation and want to remember where you were when you captured a particularly cool photo. Having GPS on all the time will massacre your battery, though, and it takes a few minutes to get a signal every time you turn it on, so use it judiciously. 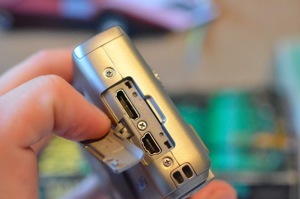 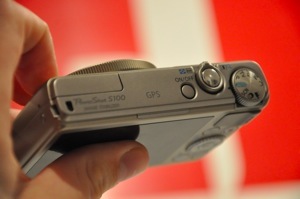 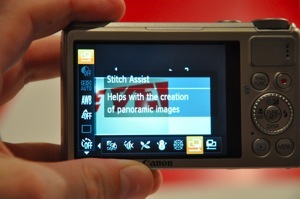 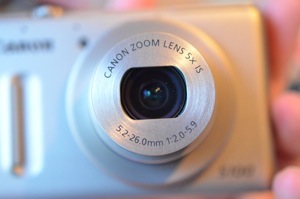 As I mentioned before, most of the S100’s upgrades over the S95 are internal, and evolutionary rather than game-changing. The S95 had a larger-than-average sensor (though still small compared to DSLRs or Micro Four Thirds cams), and 3.8x optical zoom on a bright, f/2.0 lens that extended from 28-105mm. The S100 bumps up to 5x zoom on a 24-125 lens (still f/2.0), and swaps the CCD sensor for a Canon-optimized CMOS.

Most of the changes are obviously positive, but the sensor change made me nervous — the S95 was so good, why fix what’s not broken? After using the S100 for a while, I’m still wondering. The S100’s photos are still excellent, but I can’t find a shred of evidence that points to them being better. In fact, in one noticeable way, they’re worse: the S100 has a tendency to over-saturate colors, which makes them beautiful and vivid at the expense of accuracy. (The sky in some of my test shots looked just a little bit too amazing.) That’s not to say it doesn’t take terrific pictures, because it does — I’m nitpicking, and I’m only able to do so because Canon made such a good camera the last time. But the S100 would be an even better upgrade if it had kept the CCD sensor.

Low-light performance is a similar story: it’s still really good, but if anything a hair worse than the S95. The S100 does a solid job of getting crisp photos without the flash in low light, and it’s clean and clear all the way up to ISO 1600 (and still usable beyond), but all the way up the S95’s photos just looked a little brighter, and a little better. The S100 actually does a better job delivering noise-free photos at high ISOs, but the S95 handles colors better, and unless you're blowing up your photos to huge resolutions I think color performance is more important.

As point-and-shoots go, the S100 is extremely fast, thanks to Canon’s new DIGIC 5 processor. It can turn on and capture a photo in a little over two seconds, and only has about a quarter of a second of shutter lag. Like most other compact cams, the S100 is set to review each shot for two seconds after you take it, but you can turn that feature off in settings and capture a photo about every two seconds. All those numbers are fast for any camera and very fast for a point-and-shoot, and all are notably faster than the S95. We’ve seen the future, though, and it’s dual-core processors like those inside the Casio Exilim ZR100 and the Olympus PEN E-P3. They allow you to capture an image while simultaneously writing the last one to your memory card, and I’m not sure how much longer anything else will seem adequate. Without one, the S100 is fast, but not standard-setting fast.

With great power comes great battery needs, too, and the fast processor and higher-res capability mean longevity is not the S100’s strong suit. The camera only lasted me for a couple of hours of heavy shooting, or two or three days with normal use. Plan to buy an extra battery for the S100, or to recharge the shooter every couple hundred shots.

The camera can also zoom and autofocus when you’re recording video — there’s a slight noise from the zoom, but it’s not a problem, especially if there’s other sound in the video. Both zoom and autofocus are insanely slow when you’re shooting video, though, so don’t expect magic. Actually, autofocus in general isn’t great here: in an effort to be fast, which it is, it chooses odd things to focus on, and changes its focus every time you press the shutter.

If pure image quality is what you want, the S95 is still a better camera

There are now two cameras at the top of the point-and-shoot market, and Canon makes both of them. The S95 gets a slight edge in terms of image quality, but the S100’s wider lens, faster performance, and video recording are all solid tweaks on top of the S95. The S95 is still on sale for $399.99, and can probably be found for much less now that the S100 is available; unless the S100’s improvements are particularly compelling, I’d recommend sticking with the S95. Both are excellent on every level, though, and the S100 is far better in most respects than just about every other compact camera out there. Of course, for $70 more you can get the Olympus E-PM1 Micro Four Thirds shooter, with interchangeable lenses and a larger sensor, but it’s not nearly as comfy in your pocket.

Want to see how the S100 stacks up against the S95, G12, and Olympus E-PM1? Check it out right here in our product comparison!