A leaked Verizon document has given anticipated launch dates and pricing for the Droid Xyboard, along with a significant price cut for the original Xoom LTE.

The latest Verizon Minimum Advertised Price document has been uncovered by Droid Life, revealing on-contract pricing for the next generation of Motorola's tablets, the Droid Xyboard. The name isn't explicit, though — it's referred to as the "Motorola Tablet," suggesting that either one of the companies has had a moment of clarity or that the new brand is still being kept under wraps. Prices start at $429.99 for the 16GB 8(ish)-inch Media Edition, going all the way up to $729.99 for the 10-inch 64GB version of the tablet. The fact that you're tied into a contract means that these devices are likely to be at least 3G, though you'll have to pay a minimum of $30 a month for one of Verizon's data plans. The Xyboard's apparently set to launch on December 8th — the same date we expect to see Verizon introduce the Galaxy Nexus — so it's shaping up to be a busy day for Big Red.

Also shown in the document is a price cut for the original Xoom LTE, which should be dropping to $199.99 on contract from this Thursday. The price looks set to stick until at least March next year, so it's not just a Black Friday special, indicating that Verizon will be using the first-generation Xoom as an entry-level tablet. 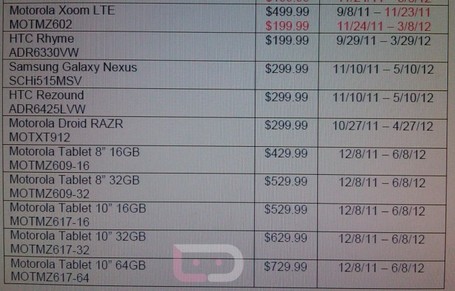