Can Kobo jump into the cheap e-reader / tablet game and catch up to the Kindle Fire and Nook Tablet?

In the race for the best 7-inch tablet, the Amazon Kindle Fire and Barnes & Noble Nook Tablet have zoomed past the competition with sub-$250 price points and well-rounded reading and app selections. But a third competitor with similar tactics has just suited up to take the track: Kobo’s Vox. Kobo itself might have just been acquired by Rakuten, but that isn’t stopping the company from forging on with its own $200 Android tablet. Now, the Vox isn’t as well spec’d as the Fire or the Nook Tablet — it’s only got a 800MHz single-core processor and 512MB of RAM — but it does have a relatively clean version of Android 2.3, access to over 15,000 free Android apps through a third-party app store, and a decent selection of Kobo’s books. So, does the Vox come out of nowhere, weave through the competition, and lead the cheap Android e-reader / tablet race? Or is it simply stuck on Amazon and B&N’s tails? The review below has the answers.

The Vox’s design is almost as unassuming as the Kindle Fire’s, and that’d be fine if it didn’t feel so poorly made in comparison. While the blue, pink, or green color options may distract from the build quality, the black version I was sent couldn’t mask the cheap plastic exterior. The edges and the screen (more on that below) are the worst offenders — both just remind me of something you’d find in Toys R ‘Us. To its credit, the single aesthetic distinction — a quilted, rubberish back — does give it a comfortable feel in hand. Still, it’s really not enough to make up for the use of supbar materials everywhere else and the thicker frame.

The Vox measures .53-inches thick, and considering the much more powerful Fire and Nook Tablet measure slightly less at 0.5 inches, the bulk really isn’t forgivable. For all intents and purposes, the Vox is still very compact for a 7-inch tablet; it just should have been thinner. Surrounding the tablet you’ll find a power button along top, a volume rocker along the right edge, a 3.5mm headphone jack and microSD card slot on the left rail, and a Micro USB port on the bottom. The silver-colored buttons, as you might have guessed, go along with the plastic feel and are reminiscent of the controls I once had on a plastic Rio MP3 player. To sum it all up, the Vox may look like every other tablet from afar but in hand it doesn’t feel as nice as the Nook Tablet or Fire. 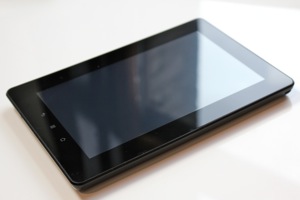 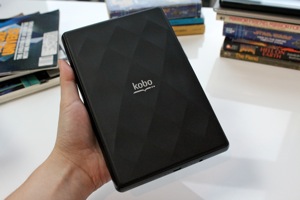 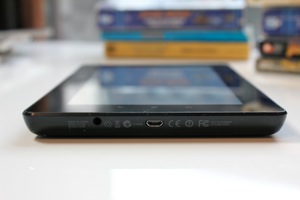 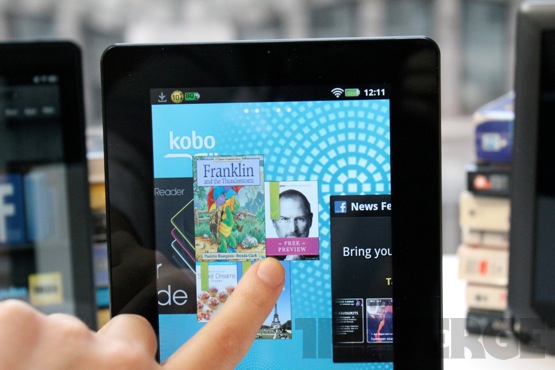 I started to hint at the terrible display above, but you haven’t heard anything yet. First, there’s the problem of the actual panel. The 1024 x 600-resolution FFS+ display isn’t as bright or crisp as the IPS displays on the Nook Tablet or Kindle Fire and colors look washed out and muted, especially in graphic-rich books. Subsequently, the viewing angles aren’t great; you can still hold the tablet off axis and make out black and white text while reading in bed, but colors quickly fade at pronounced angles. Kobo is claiming that the display is easier to read on outdoors, but when I held it next to the Fire near the window it was just as reflective. B&N and Amazon raised the bar when it comes to the display quality on their respective offerings, and the Vox simply doesn’t keep up here for the price.

The panel itself is a problem, but the touchscreen quality is even more troublesome. Kobo is using a capacitive layer, but at times I thought it was a resistive screen, which means that I had to press harder than usual to get swipes and taps to register. Now, some of the onus may be on the software (more coming on that below), but the plastic display is without a doubt slow to respond to taps. Even swiping to turn pages can be sluggish and can require a couple of finger drags to get it moving. It goes without saying that this is a huge problem for a device that is first and foremost an e-reader. I’d actually breathe a sigh of relief when going back to using the Nook Tablet, Kindle Fire, or even the year-old Nook Color. The speaker, located on the upper edge, is tinny, but a tad louder than the one on the Nook Tablet. 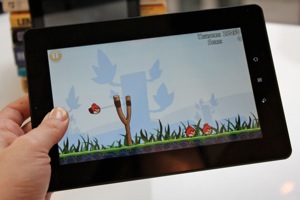 Unlike Amazon or B&N, Kobo hasn't completely rethought Android 2.3 for tablets. The Vox runs a relatively clean version of Android with a couple of tweaks here and there. The largest one of those is a library widget that refreshes with the latest books and a reading tracker that is permanently locked to the notification pane; it cleverly lists the amount of time you've spent reading, number of pages turned, etc. Other than that, Kobo's added a persistent toolbar along the bottom of the software that includes shortcuts to the current book you’re reading, the Library, Kobo Shop, and reading statistics.

Kobo didn't put as much time or energy into the software as Amazon or Barnes & Noble and not only does it show in aesthetic, but it also shows in speed. There's more to come about this in the performance section, but the software is sluggish and that impacts even the fundamental purpose of this device — reading.

Page turns aren’t as fast or swift as those on the Nook Tablet and Kindle Fire and turning the orientation of the device while in a book takes about four seconds and initiates a spinning wheel. That waiting time is intolerable when you’re actually into the content you’re reading. If you can look past the sluggishness of the page turns and the frumpy-looking design of Kobo's library and store, the Vox does offer some interesting reading features. You can log in to Facebook, comment right on pages of a book, and see what your friends have said. Kobo's selection, while not skimpy, isn't as large as B&N or Amazon Kindle but still has a large offering of over 2.2 million books. Kobo doesn't offer its own magazine selection but has partnered with Zinio. 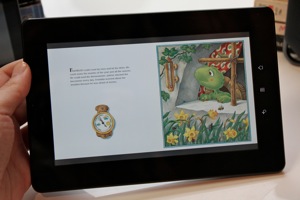 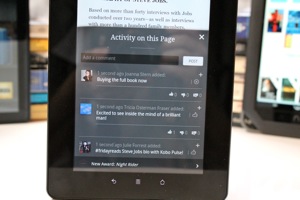 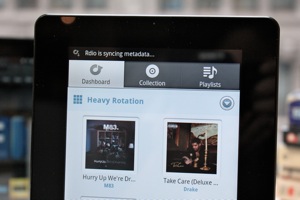 In addition, Kobo’s linked arms with some other companies on the third-party app front, including Rdio. While it's the same as the usual phone app and it can be slow to load, neither the Fire or Nook Tablet have access to that service. Lastly it has access to over 15,000 apps through GetJar, a web-based app store. The store has access to a decent selection of phone apps, but a number of the important ones are missing, including Facebook, Pandora, etc. That said, it was extremely easy to sideload apps to the device; drag and drop and you’re set. Also, unlike the Nook Tablet, Kobo isn’t setting storage stipulations — you can use the 8GB of onboard space for whatever you’d like and the microSD card slot makes it expandable to 32GB. 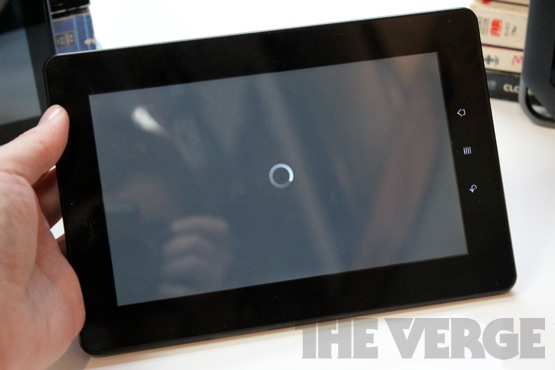 Sure, I knew that Vox's 800MHz Freescale i.MX51 processor and 512MB of RAM wasn't going to win any speed tests, but the performance was way worse than I expected. As I have mentioned above, everything from page turns to menu transitions to some Angry Birds playing is jittery. On top of that, it takes awhile for the tablet to load certain Kobo apps and menus. I consistently got used to seeing a spinning circle as the tablet caught up with turning the orientation of the display or a selection I made to purchase a book. I think you're getting the point: the mix of a bad touchscreen, sluggish software, and underpowered internals makes the experience of using this tablet beyond frustrating.

Battery life was also disappointing in comparison to the competition. On The Verge Battery Test, which visits 100 websites and downloads high resolution images with brightness set at 65 percent, the tablet lasted four hours and 20 minutes. That’s shorter than both the Fire and Nook Tablet, and even in real life use I noticed the battery losing a charge faster then the others. Of course, the tablet will last much longer if all you’re doing with it is reading and intermittently surfing the web. 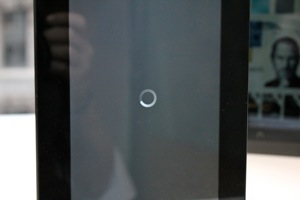 The Vox isn't a contender in this new cheap tablet race; it's not even on the track

The truth is that I actually felt bad for Kobo while writing this review — the company has consistently been the underdog in the e-reader race and it has always been overshadowed by larger competitors. But most of the time I felt badly for myself as I consistently waited for books to load, pages to turn, and the screen to register my taps. In the pre-Fire and Nook Tablet era, Kobo may have gotten by with a poor screen, underpowered processor, and sluggish software for $200, but the reality is that the other options out there provide an experience that's incontrovertibly better for the exact same price. I think the answer is fairly obvious: the Vox isn't a contender in this new cheap tablet race; it's not even on the track.