BlackBerry Bold 9900 users waiting for the first major update to BlackBerry OS 7 can get a sneak peek at what's coming thanks to a leaked ROM that finally adds Wi-Fi hotspot functionality and support for Wi-Fi calling.

BlackBerry Bold 9900 users waiting for the first major update to BlackBerry OS 7 can get a sneak peek at what's to come thanks to a leaked ROM that adds Wi-Fi hotspot functionality, emergency alert messages, and enables calling over Wi-Fi. NerdBerry reports that the new calling option was discovered when running the build — version 7.0.1.74 — on a T-Mobile device. An "About Wi-Fi Calling" informational screen appeared along with a new call status icon, though it's not yet clear whether this is true UMA calling or another Wi-Fi variant. T-Mobile supports the feature, which allows users to make and receive calls over Wi-Fi rather than the carrier's cell network, across a broad selection of its phones; AT&T and Verizon have been reticent to adopt it.

While certainly welcome, neither of the new additions should come as much of a surprise. RIM had promised the Wi-Fi hotspot feature earlier this year, and has supported UMA calling in previous versions of its OS. Still, with both features reportedly looking fully functional in the leaked ROM, we'd like to believe that the official release will arrive sooner rather than later. If you feel like you want an early look, however, check the source links below to get your hands on the update. 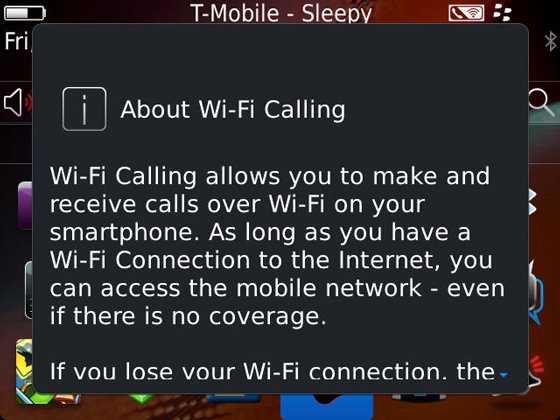