Wacom's digital pen solution lets you write on any piece of paper, but does it really work as advertised?

Check out the desk of your average graphics designer and you'll most likely find a Wacom tablet plugged into their computer, likely the Bamboo or — if they have the budget — a Cintiq. These tablets are great for precision editing, but you've got to be at a computer to use them. But Wacom's new Inkling is all about portability — you draw on paper first and edit on the PC later. By utilizing a digital pen and special receiver, users can digitally capture any and all scribbles on any piece of paper. It’s similar to IOGEAR’s Digital Scribe Pen, but has more of a focus on sketching and art and less of an emphasis on text recognition. I've been testing the Inkling for the last week, and while I may not be a professional designer, I do my fair share of note-taking and doodling. So, is this the solution that'll finally force you to digitize your notebooks and sketchbooks? Keep reading to find out. 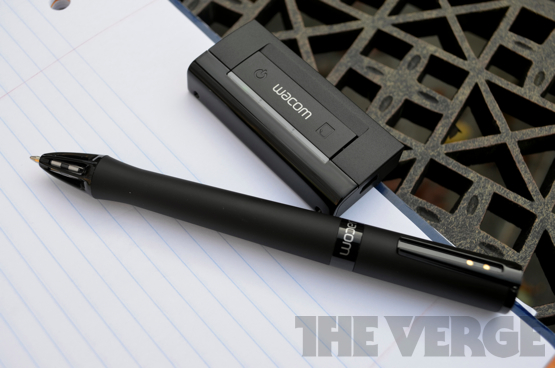 The Inkling pen has a fairly minimalist design, with subtle curves and clean lines all around. It’s heavier than your standard Bic pen, and like most digital pens, it has a larger circumference. I personally found it to be rather uncomfortable when gripped, and was longing for my gel pens still tucked away in my backpack. Personal preferences will dictate how users feel about the pen, but something about the way it rested in my hand made writing with it feel more like a chore than normal. Since it uses standard ballpoint ink cartridges, you won’t be able to get fancy with edges and lines, but does mean the color can be changed should you purchase a replacement. It has a single status LED at the top that flashes green whenever transmitting and red when it’s powering down.

The pen’s counterpart is a specialized receiver responsible for recording and storing sketches. It has a built-in clip for easy attachment to any piece of paper or sketchbook. Interestingly, every time you squeeze the clip, it recognizes a new page and begins a new sketch file for subsequent pen movement. You may unintentionally create two separate documents if the receiver detaches from the sheet, but layers and drawings can be combined in Photoshop after the fact. The top of the device has a power button as well as one to create a new layer, and LEDs to indicate power and transmission status. The front of the unit houses the ultrasonic and infared sensors, which help capture drawings from the pen itself — but more on those in a bit.

The coolest part of the package is the included plastic case. When not in use, the compact carrying case houses the Inkling and all its components, while doing double duty as a charging system for the hardware within. The case houses the digital pen, spare ink cartridges, Mini USB cable, and Inkling receiver that all fit into special slots on the inside. The pen itself is stored in a spring-loaded circular slot on the side and uses tiny gold contacts at the top for charging while the receiver connects via secondary Mini USB on the inside. A singular Mini USB port on the outside of the case charges the receiver and pen simultaneously. I found it annoying that the device uses a Mini USB cable rather than a more common Micro USB cord. The included cable and dedicated storage slot does make it a little easier to swallow.

Upon unboxing, you’re instructed to charge the whole unit for at least three hours, at which point the battery is quoted to last 15 hours for the pen and eight for the receiver. I didn’t exhaustively test the battery, but any time you plug the unit into your PC it begins charging — where you can also view the current battery level. I used the Inkling for three days without any explicit charging (aside from the initial one), and it still had juice when I plugged it in. The bottom line is that battery life shouldn’t be a major issue for this product so long as you have a computer nearby. 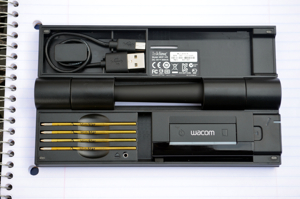 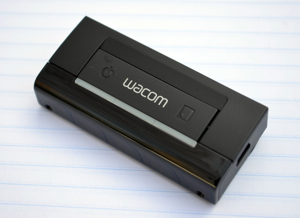 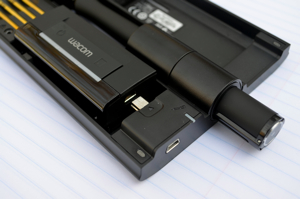 In real-world use, the Inkling system works much like you would expect: touch the pen to your paper within the line of sight of the receiver, and a green light appears on the end of the pen as well as the top of the receiver. So long as you're making contact and nothing is blocking either piece, all touches are registered and recorded to the 2GB of internal memory. (I didn’t experience a single file size over 1MB, so storage shouldn’t really be an issue.) You can add new layers by tapping that aforementioned button atop the receiver, and they can be separated in Photoshop or the accompanying desktop Sketch Manager software during processing.

Performance-wise, I have to describe the Inkling’s output as inconsistent. I used the Inkling to record notes for the better part of a week in class, and was disappointed to see a good amount of textual distortion and the occasional missed stroke. Simple sketches fared better, especially when relegated to central location on paper. Wacom’s listed maximum paper size is 8.27 x 11.67-inches wide, which is slightly narrower than the standard piece of notebook paper. I didn’t have issues with width, but rather the height, and noticed that sketches at the bottom of the page suffered from more missed strokes than higher up.

I was careful to make sure that I wasn't interfering with the signal transmission, but ended up with output of a far poorer quality than if I had simply scanned the sheet of paper manually. You see, the pen's tip has to be visible for the receiver to register strokes, so your wrist or even fingertips can get in the way unintentionally. I'm really unsure why my text came out so terrible, but smaller drawings and sketches did fare somewhat better. Still, for a device that's all about drawing, there shouldn't be any distortion whatoseverr. 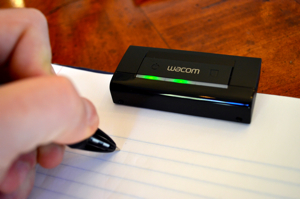 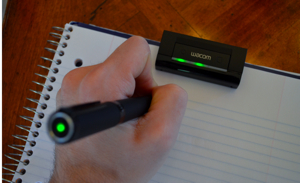 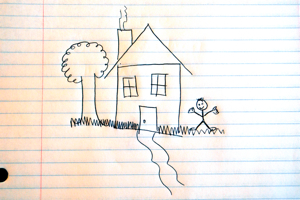 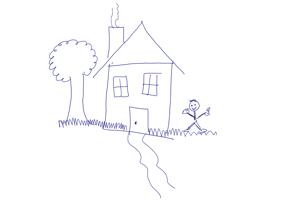 Other gripes I had with the system are its one-color limitation and its weak text applications. You can switch the pen’s color using a standard ballpoint ink cartridge, but most people will not switch colors on the fly. Similarly, there are no OCR (optical character recognition) capabilities, and text capture was less than stellar.

One other interesting but lesser-known feature of the Inkling is that it can function as a secondary input device for your PC. With the receiver plugged in, you can use the pen as a tracking device much like a mouse or actual drawing tablet stylus — hovering around the page’s area to move the mouse and touching down to actually register a click. It won’t be as sensitive or full-featured as a dedicated drawing tablet, but is a nifty bonus feature that you might have not known about before. 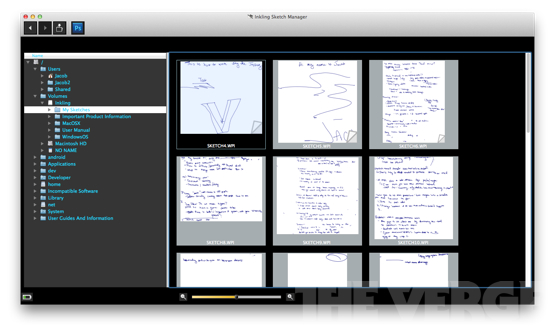 Once you plug the receiver in, you can scan through all sketches and evaluate your output using Wacom's Sketch Manager software, which is basically horrible. The app’s UI is unintuitive and backwards, with oddly placed buttons and a fickle toolbar that often hides important buttons in an unnecessary drop-down menu. Annoyingly, the app opens at login on OS X, and I couldn’t find an option to disable it either in the app’s preferences or in OS X’s Login Items window either. To make matters worse, Sketch Manager is the only app that can read Inkling's proprietary WPI files, so you're forced to use it no matter what.

Similar to Livescribe’s software, you can replay an entire drawing, which is a cool feature in theory but probably not all that practical. It will also export Inkling drawings directly to Photoshop, Illustrator, or Autodesk Sketchbook, preserving layers from the original file as you would expect. Layers can be toggled from within the Sketch Manager app, and are compiled together when you press the Photoshop button at the top. You can also export sketches to other file formats (JPG, PNG, PDF, etc.). I just wish it wasn't such a chore.

The Inkling should satisfy a small group of target customers, but it's not for everyone

The Inkling is a well-designed product with terrible software that takes away from the user experience. It does work well for sketches and doodles, and will probably satisfy what I imagine is a small group of customers who prefer to sketch on paper but still want the perks of going digital. For $199, I expected a much more comfortable pen and perfect accuracy, but instead it's uncomfortable and I noticed too many missed or distorted strokes while writing text. Inkling's feature set won't replace my write-and-scan tendencies for digitization just yet, but designers looking to break away from the computer and sketch on the go might be able to overlook its limitations.