Share All sharing options for: Glass keyboard and mouse concepts give new meaning to minimalist design

Oregon-based Giddings is currently fundraising on Kickstarter to produce a wireless multi-touch glass keyboard and mouse pair, which looks like something from Star Trek and promises to be coffee- and crumb-proof. Better still, the software that controls the devices will be open source, meaning that any inspired developer will be able to adapt the input from the surface of the device to their own end — the designer suggests that a color mixer or media controller as just a couple of examples.

The devices work using a technique called frustrated total internal reflection. Infra-red LEDs are mounted along the edge of the glass at an angle which causes the light to be bounced around inside the unit. When a finger comes in contact with the glass, the light is reflected out of the bottom of the tablet, which is detected by a camera mounted in the base. By calculating how the light is reaching it, the camera is able to detect clicks, gestures, or the letters you are typing. The fundraiser currently has 33 days to go, and has already collected more than $5,000 of its $50,000 target. To be guaranteed a unit, you'll need to be prepared to stump up $150 or more, and you'll be waiting until April next year at the earliest — so who has their wallet out already?

Update: Well, that was quick. It's taken less than two days to get there, but the concept has reached its goal. The firm is so overwhelmed by the response that it's set another incentive: if the Lunatik TikTok's record-breaking $942,578 is toppled, all rewards listed on the page will be doubled. 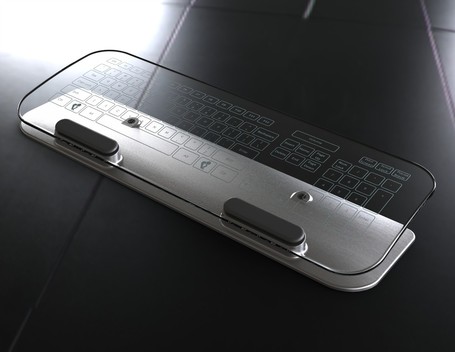