Following the badly received update to its Reader service, Google's now pushed out an update to its accompanying Android app with similar features.

Share All sharing options for: Google updates Reader and Docs apps for Android

Following the badly received update to its Reader service, Google's now pushed out an update to its accompanying Android app with similar features. The new version brings an Android 4.0-optimized interface, with matching widgets — the major change here is the loss of the old previous / next buttons which have been replaced by intuitive swiping gestures, giving more screen space to your feeds. Users are likely to be less happy with the changes to sharing, which require a three-step process to share to Google+ rather than the simpler "Note in Reader" function it replaces.

We're also seeing an update to the Docs app which provides bug fixes to the previous version, mainly targeted at tablet users. As a reminder, this brought a new interface providing a three-panel view, a new portrait mode, and easier navigation. Reviews here seem generally more positive, but some are still less than happy with the interface for editing. We've included a screenshot below.

If you decide to take the plunge, both updates are available from the Android Market now. 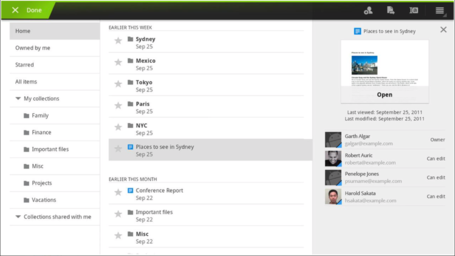