HTC's finally announced the Rezound (long known as the Vigor) at an event here in NYC today, and it's pretty much the powerhouse of a phone we thought it would be.

It's about time! As expected, HTC's finally announced the Rezound (long known as the Vigor) at an event here in NYC today, and it's pretty much the powerhouse of a phone we thought it would be. Internally it's got a 1.5GHz dual-core processor, 1GB of RAM, Verizon LTE, and an 8-megapixel rear camera. But it's more than just insanely impressive internal specs: the 1280 x 720-resolution, 4.3-inch display is looking to give the Galaxy Nexus a run for its money, though it will ship with Android 2.3 and will get Ice Cream Sandwich "early next year." Additionally, as you're seeing above, the Beats branding is front and center with red software buttons and a set of Beats earbuds included in the box. (Oh yes, Beats founder Jimmy Iovine took center stage with HTC CEO Peter Chou at the event.)

So when will those boxes actually be hitting Verizon stores? It will be hitting Verizon and Best Buy on November 14th for $299.99 with a two-year contract. That's a pretty insane Verizon Android line up hitting this month — the Razr hits around the 10th and the Galaxy Nexus is rumored to launch around then as well. We'll be back very soon with some hands-on impressions of the device, but in the meantime check out the Rezound's full specs and how it stacks up against its closest competition right here. 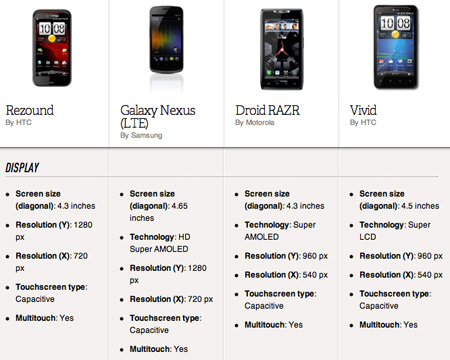